52% Increase In Stalking Cases Over 3 Years, Maharashtra Reports Most Cases

As many as 7,132 stalking cases against women were reported in 2016, an increase of 52% over 2014, according to this reply by Hansraj Gangaram Ahir, minister of state in the ministry of home affairs to the Lok Sabha (lower house of parliament) on August 8, 2017.

Over the last three years, Chandigarh has witnessed 38 cases of stalking being registered, in which 41 arrests were reported.

As many as 18,097 stalking cases have been reported in India over the last three years, and 20,753 people have been arrested. 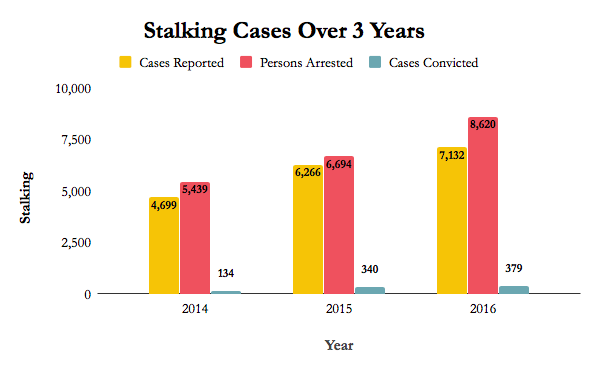 The top five states accounted for 67% of stalking cases across the country.

Stalking cases are registered under section 354D of the Indian Penal Code.