50% Rise In Diabetes Deaths Across India Over 11 Years 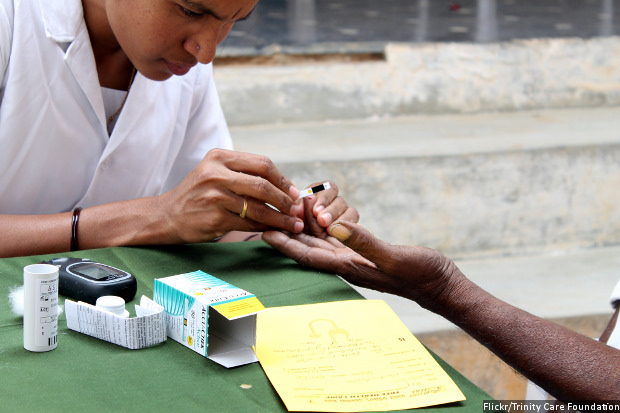 With a genetic predisposition brought to the fore by changing lifestyles, deaths due to diabetes increased 50% in India between 2005 and 2015, and is now the seventh most common cause of death in the country, up from the 11th rank in 2005, according to data published by the Global Burden of Disease (GDB).

Nearly 26 people die of diabetes per 100,000 population; diabetes is also one of the top causes of disability and accounts for 2.4% of the disability adjusted life years lost (sum of years lost due to disability or premature death due to the disease).

The figures are alarming since diabetes is a chronic disease that not just affects the pancreas’ ability to produce insulin but affects the entire body. Complications caused due to diabetes include heart disease, stroke, kidney failure, vision loss and neuropathy or nerve damage leading to leg amputation.

Unlike other countries, where a majority of people with diabetes are over 60 years old, the prevalence in India is among the 40-59 years age group, affecting productivity of the population.

Why the rise in the diabetes? Blame genes and changing lifestyles

Indians are especially predisposed to diabetes due to social and genetic reasons. Peculiar genetic composition of Indians known as ‘Asian Indian Phenotype’ makes them appear thin but with fat depositions around their internal organs.

It makes them prone to greater abdominal fat, insulin resistance, higher levels of bad fat and increased chances of suffering from diabetes and coronary artery disease.

Cost of diabetes: Urban poor spend 34% of income on treatment

Since most of the healthcare cost is borne out of pocket in India, those in lower economic groups have to bear the greatest burden. Urban poor spend as much as 34% while rural poor spend 27% of their income on diabetes treatment, the study found.

India is predicted to have 123 million diabetes cases aged between 20 and 79 by 2040, according to estimates by IDF. “We need a national campaign on the level of pulse polio to tackle diabetes, it is soon going to be a problem bigger than TB, HIV and malaria together,” Misra said.

Even though diabetes features in the National Health Mission’s National Programme for Prevention and Control of Cancer, Diabetes, Cardiovascular Diseases and Stroke for district-level intervention to prevent non-communicable diseases, it needs to do more to screen, create awareness and monitor and treat the disease to stem the tide.