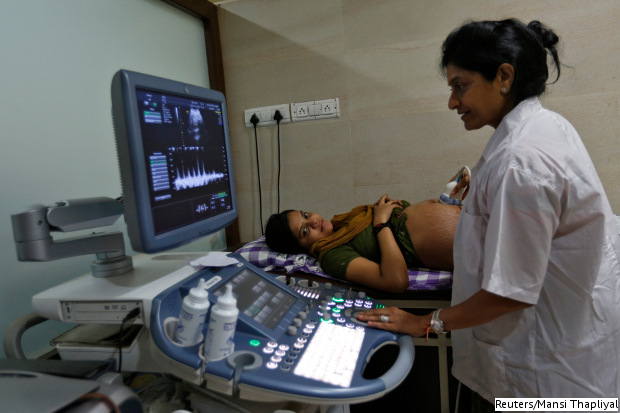 An expectant mother having an ultrasound examination in Anand, Gujarat. The Uttar Pradesh government has left unspent about half the funds it was allocated to curb female foeticide, according to a recent report of the Comptroller and Auditor General of India. The audit found that none of the diagnostic centres followed mandatory rules of preserving image records or backups taken during the ultrasonography of pregnant women. In 68% of cases, women did not even hold the necessary referral slips from their doctors.

The Uttar Pradesh government has left unspent about half the funds it was allocated to curb female foeticide, according to a recent report of the Comptroller and Auditor General (CAG) of India. This, in turn, has impacted India’s position in global gender indices.

UP, India’s most populous state, also records the second highest fertility rate in the country after Bihar. An average woman here bears at least three children in rural areas, according to the 2013 Health and Family Welfare Statistics report. However, the state is also witnessing a rapid decline in its child sex ratio. For every 1,000 boys aged between 0 and 6 years, the state has 902 girls (Census 2011), down from 916 in 2001 and 927 in 1991. Three decades ago, in 1981, UP recorded a ratio of 935.

Latest figures for UP from 2015 indicate that the child sex ratio has further fallen to 883, observed the CAG report based on data from the Health Management Information System.

Nature produces more males than females, as boys are more vulnerable to infant diseases than girls. The child sex ratio, therefore, tends to mirror the sex ratio at birth--ideally, between 943 and 954 females for every 1,000 males.

Since 2001, the child sex ratio in India, in general, and UP, in particular, has plunged below this, suggesting that female foeticide continues unabated.

This is despite the fact that UP, which elects 73 of 543 members of parliament in Lok Sabha, has considerable political clout. Prime Minister Narendra Modi, won his parliament seat from Varanasi in 2014, while Congress president Sonia Gandhi bagged Rae Bareilly.

UP seeks funds, leaves much untouched

The CAG report rapped the state government for its “lackadaisical attitude” towards implementing the Pre-Conception and Pre-natal Diagnostic Techniques (Prohibition of Sex Selection) Act, 1994 (PC-PNDT Act). The law aims to prevent sex-selective abortions through regulation and monitoring of clinics using ultrasound equipment. Earlier this year, state chief minister Akhilesh Yadav had sworn to protect the girl child through strict implementation of the Act across UP.

With state elections due in five months, activists are hoping the CAG comments will be raised in political campaigns. “It’s time for politicians to rally and push for more action on crimes against unborn girls. In past UP elections, caste and communalism took precedence over basic human development issues,” said Sabu George, a veteran advocate against female foeticide and member of the National Inspection & Monitoring Committee set up under the PC-PNDT Act.

Between 2010 and 2015, UP--among the 10 Indian states with the lowest child sex ratios--claimed it would need Rs 20.26 crore to prevent sex-selective abortions through implementation of the Act. Of this, the state received 35% (Rs 7.09 crore) from the Centre through the National Health Mission.

From the funds received, the state spent 54% (Rs 3.86 crore) over five years--barely 20% of the state’s original estimate, the CAG report noted. The state also raised an additional Rs 1.9 crore through registration or renewal fees and penalties charged from diagnostic centres. This is kept in a savings bank account and remains unused.

“In most women empowerment schemes, UP showed significant savings ranging from 46 to 100 per cent -- mainly due to poor implementation,” the CAG audit observed in a chapter entitled ‘Missing Daughters’. “Despite allocation of funds, majority of the schemes… could not achieve their goal of reducing gender disparity due to lack of planning and inefficient execution by implementing agencies and ineffective monitoring by the governance structure.”

“Missing Daughters” is a comprehensive audit of the implementation of the PC-PNDT Act at the state-level (carried out in 20 of 71 districts) to ascertain whether available diagnostic technologies are properly regulated and monitored.

The audit found that none of the diagnostic centres followed mandatory rules of preserving image records or backups taken during the ultrasonography of pregnant women. In 68% of cases, women did not even hold the necessary referral slips from their doctors.

Further, as per the PC-PNDT Act requires, a district appellate authority (DAA) must maintain permanent records of all diagnostic centres including details of the ultrasound machines possessed. However, in 13 of 20 audited districts, no such records were available.

Despite this negligence, the audit found that “neither any action was taken nor any penalty imposed on the defaulting USG centres by District Magistrates” in 936 (58%) of 1,652 registered diagnostic centres in the surveyed districts. Only show-cause notices were issued to 221 centres in five years without follow-ups.

State and district advisory committees did not meet regularly, nor did they ensure proper follow up action on their directions. “This rendered the entire system of monitoring, created under the provisions of the PC-PNDT Act, ineffective and largely dysfunctional,” the CAG observed.

Owing to its size and population, UP’s ineptitude in dealing with gender disparities has considerable impact on India’s ability to improve its performance in the global human development index. Recently, the country was ranked 108th of 145 countries in the World Economic Forum’s Gender Gap Index, much below neighbours such as Sri Lanka (84) and China (91). Along with Bihar and Rajasthan, UP is among the worst Indian states for women to live in, IndiaSpend reported in July 2016.

UP and gender ranking of rest of India

“One in every four Indian girls is born in UP. Thus, the state’s declining sex ratio seriously impacts India’s overall child sex ratio, and we are not likely to see much improvement in rankings in 2021 unless the issue is taken up seriously in the largest state,” said George.

The report on UP is also symptomatic of a larger trend of states’ poor implementation of the Act across India, as IndiaSpend has previously reported in June 2015. Since the law came into effect in 1996, only 350 people have been convicted under the Act, suggesting vast underreporting of the crime, IndiaSpend reported in August 2016.

Some key findings from the CAG audit