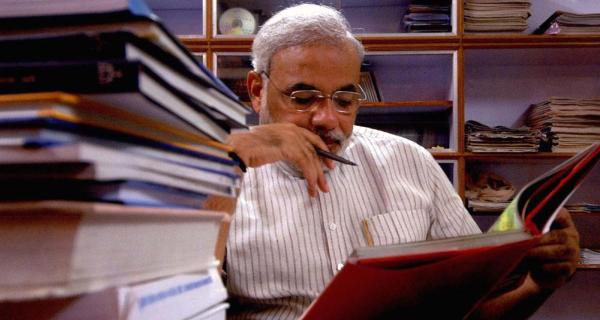 * Agriculture needs boost since 52% people are still dependent on farming

* Hiring pace slows down in industries but productivity increasing

Chief Minister of Gujarat Narendra Modi will face the electorate again in December 2012. So, it’s time to look at his achievements over the past 5 years, and try to understand whether he did better in this stint or his last stint as the Chief Minister. IndiaSpend looks at some key economic indicators in this article, and will look at key social indicators in a forthcoming article.

First, a look at the growth numbers of GSDP and per-capita NSDP since 2007.

Table 1: Growth of GSDP and per-capita NSDP since 2007 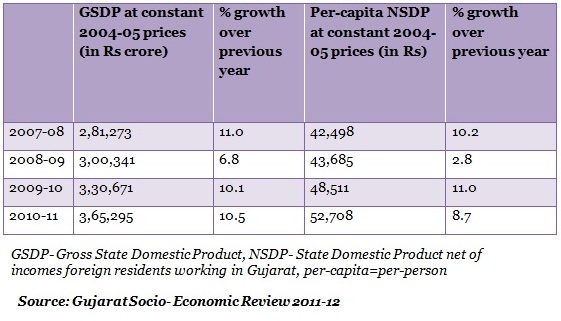 From (Table 1) we can see that Gujarat was able to maintain double-digit growth rates in all years except when the global recession hit its economy in 2008-09 and growth slipped to 6.8%. Per-person income has also been increasing, and touched Rs 52,708 in 2010-11. The per-capita growth rates are also around 10% except in the year 2008-09 when it was around 3%.

Thus, if judged on a basic level, the performance of Gujarat has been commendable over the period. However, as we argued in a previous article, the performance, relative to some other states like Tamil Nadu and Maharashtra, could have been better. 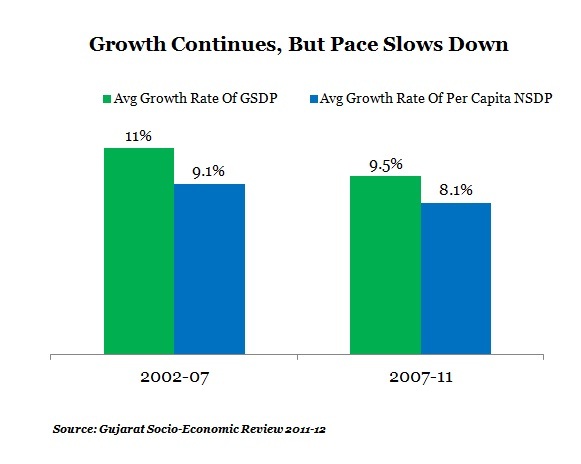 Thus, barring the effects of the global recession, the performance of the Modi government has been roughly similar for the two periods if not better when it comes to overall growth numbers.

Let’s now look at a few indicators relating to agriculture and industrial growth. 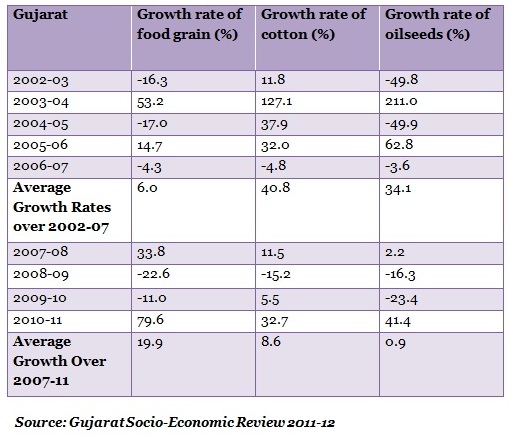 But what is obvious from the table is that average growth rates do not make much sense in this context. The variation in growth rate in the categories across years is huge. This suggests primary dependence of Gujarat’s agriculture on monsoons. Given the fact that 52% of the population of Gujarat draws its livelihood from agriculture, stability in that sector is a necessity. It seems that in his drive to industrialise the state, Narendra Modi may have ended up neglecting the needs of the agricultural sector.

To understand the industrial improvement better, we will look at the increase in the number of factories and employment in factories over the period 2002-10.

Table 3: Number of Factories and Employment 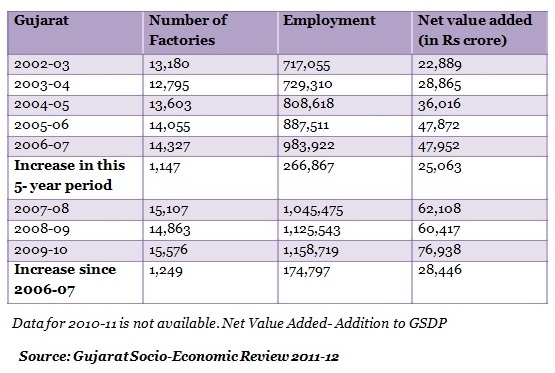 If we compare the two periods 2002-07 and 2007-10, the increase of factories were more over the latter period. Over the first period, 1,147 factories were added providing new employment to 2.6 lakh people. On an average, every year, 53,373 new people were provided employment. Since 2006-07, 1,249 new factories became operational. The increase in employment was to the tune of 1.7 lakh or average annual employment increase of 43,699 people.

Even though the Modi government has performed well when it comes to overall growth and industrialisation, it needs to take serious measures to curb fluctuations in the agricultural sector if it wins the elections. And the hard truth is that despite being one of the most industrialised states in the country, most of its people still survive on agriculture. While economic growth can lead to improvements in social conditions, a future IndiaSpend article will look to see what the Modi government has achieved in education, health and poverty.