5 Reasons Why Israel Matters to India (And Modi) 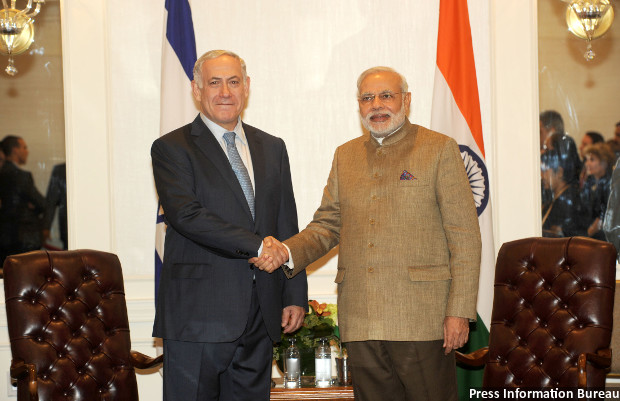 Modi is also expected to meet Moshe Holtzberg, a survivor of the 2008 Mumbai 26/11 terrorist attack. Moshe was two years old when the attack happened.

“Ahead of the visit, both countries have prepared a roadmap of joint economic undertakings,” The Haaretz reported on June 29, 2017. “The Israeli cabinet approved a 23-page document continuing scores of bilateral measures and a budget of 280 million shekels (about $79.6 million or Rs 514 crore)--a bigger sum than Israel has ever set aside for China, Africa and Latin America combined. No fewer than 11 ministries were involved in preparing the program.”

In the 70 years of the country's existence no Indian Prime Minister has ever visited and this is further expression of Israel's strength.

Here are five things that define the India-Israel relationship today:

1) Defence: India is Israel’s top destination for arms exports, buying 41% of Israel’s arms export between 2012 and 2016, according to the Stockholm International Peace Research Institute, an independent global conflict and arms-research institute.

The earliest signs of collaboration came during the 1962 Sino-Indian war, when Israel provided India military aid. Israel also assisted India during two wars with Pakistan in 1965 and 1971, according to this 2009 article in the Stanford Journal of International Relations.

India reciprocated during the six-day war in 1967 by providing Israel with spare parts for French-made Mystere and Ouragan aircraft as well as AX-13 tanks (also French-made), the Stanford report said.

The highlight of the partnership was Israel’s supply of artillery shells during the Kargil war in 1999 when India faced a shortage.

In the late 1990s, a crucial defence deal was the Indian purchase of Barak 1, an air-defence missile, bought specifically for its capability to intercept US-made Harpoon missiles deployed by Pakistan.

India’s imports of unarmed vehicles (UAVs) have almost all been from Israel. Of 176 UAVs purchased from Israel, 108 are Searcher UAVs and 68 are Heron UAVs, IndiaSpend reported in May 2015.

In April 2017, India and Israel signed a $2 billion (Rs 12,878 crore) deal for advanced medium-range surface-to-air missile system, which will provide the Indian army the capability to shoot down aircraft, missiles and drones at ranges of up to 70 km.

In September 2016, tests were conducted of the jointly developed Long Range Surface-to-Air Missile with a range of 70 km, intended to equip three guided-missile destroyers of the Indian Navy.

India successfully tested the Israeli-made SPYDER quick-reaction surface-to-air missile in May this year. The Indian Air Force is planning to deploy this system on its western border, India Today reported on February 28, 2017.

Three Indian naval ships, destroyer INS Mumbai, frigate INS Trishul and tanker INS Aditya, made a goodwill visit at the Haifa port in May 2017 to mark 25 years of full diplomatic relations between the two countries.

3) Agriculture: An Indo-Israel agriculture action plan for 2015-18 is operational, and 15 of the proposed 26 centers of excellence in agriculture are being developed in India with Israel’s help to showcase the latest technology to Indian farmers.

Source: Embassy Of Israel In India

Every year, more than 20,000 farmers visit the Agricultural Centre of Excellence at Gharaunda in Karnal, Haryana, where a nursery produces hybrid seedlings--including tomatoes, cherry-tomato, colored capsicum, cucumbers, eggplant and chilli pepper--grown in small, individual cells, ready to be transplanted into containers or a field.

There was a five-to 10-fold increase in crop yields with an accompanying 65% reduction in use of water and noticeable decrease in the use of pesticides and fertilisers, according to this December 2014 report on the Indo-Israel Agriculture Project.

4) Water Management: On June 28, 2017, the union cabinet approved a memorandum of understanding (MoU) with Israel on the National Campaign for Water Conservation in India.

Technologically-adept Israel has developed water-management technologies, located as it is in a semi-arid region with limited sources of fresh drinking water.

India and Israel had earlier signed an MoU on water resources management and development cooperation in November 2016.

India and Israel will do wonders together in our future #Water cooperation, covering all relevant watee disciplines -including #Desalination https://t.co/rmsUzR7pEp

India’s major imports from Israel in 2016-17 included natural or cultured pearls and precious stones, worth $1.11 billion.

Trade in diamonds accounts for nearly 54% of the bilateral trade. Nearly 40 diamond dealers from India have opened offices at the Israeli diamond exchange in Ramat-Gan. Some of these dealers have been active in Israel for nearly 30-40 years.

Israeli exporters complain about the difficulties in doing business in India “because of its onerous regulations, corruption and the division of the country into multiple jurisdictions of 29 states each with their own policies and rules”, the Haaretz reported.

The Israeli government has proposed measures such as “offering export insurance, liberalising the aviation sector and granting longer-term visas”. The aim is to boost Israeli exports to India by 25% over the next four years and tourists to 80,000 annually.

“Relations with Israel are significant for India because of cooperation in agriculture, defence and science/technology,” Uttara Sahasrabuddhe, professor of international relations at the University of Mumbai, told IndiaSpend.

“Israel has been giving key weapons systems to India including missiles; it has given us those weapons which we could not directly buy from the US for ideological reasons; cooperation in counter-terrorism from information sharing to techniques/doctrine of counter terrorism,” Sahasrabudde said. “It is also an important source of foreign investment, if tapped with care. The visit of the Indian PM will indicate that New Delhi has come out of the old mindset.”

Modi's visit is of "unprecedented importance with bilateral ties going through changing paradigm and changed architecture,” Israeli Ambassador to India Daniel Carmon was quoted as saying in the Economic Times on June 28, 2017. “... there is no zero sum game and commitments and good relations with both sides can be maintained without contradiction."

Modi will be received by his Israeli counterpart at the airport along with a "top protocol team" comprising Israelis from various fields including rabbis. This is a special gesture only accorded to the Pope or the US President, the Ambassador said.

The announcement has generated excitement among Israelis. The Israeli Embassy in India has tweeted a video where Israelis welcome the Indian Prime Minister in Hindi.

An estimated 85,000 Jews of Indian-origin live in Israel, the majority being from Maharashtra (Bene Israelis), with some from Kerala (Cochini Jews) and Kolkata (Baghdadi Jews).

While India recognised Israel on September 17, 1950--a year after it voted against United Nations’ membership for the Jewish state--full diplomatic ties were established only in 1992, the reticence flowing from India’s traditional backing for the Palestinian cause.

Since then, relationships have been defined by defence deals and the 35,000 mostly young Israelis who visit India each year to de-stress after their compulsory two-three years of military service.