5 Reasons To Be India +Ve 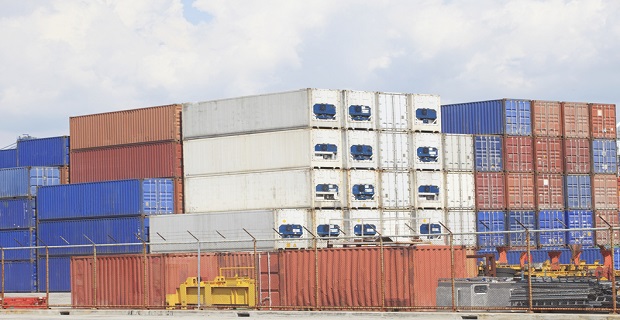 The most obvious indicator for the health of the economy – the gross domestic product (GDP) – slowed to its lowest growth in four years during the first quarter of 2013-14 or 4.4% on a year-on-year (YoY) basis.

The rupee has plummeted – in some ways so have the adjectives to describe its fate. It has dropped over 21% since the start of FY14 to hit a low of 68.3 against the dollar in the last week of August. The arrival of a new Reserve Bank of India Governor in the form of Raghuram Rajan appears to have calmed the foreign exchange markets somewhat, though nobody knows.

The stock markets have been doing their own Yo-Yo. The Bombay Stock Exchange's benchmark index, the Sensex, has declined 3% in the last three months.

The fall in the markets and the rupee are the reflections of loss of foreign investor confidence in the India story and is worrisome since the country runs a current account deficit.

That’s the bad news. As a result of this and more, most folks, from business people to outbound tourists, are feeling miserable. But we know that. Let’s instead look at what could be going right. We found that several positive trends seem to be going unnoticed – the drop in headline inflation figures, turnaround in foreign trade, stable credit offtake, positive potential impact of a good monsoon and even a potentially positive impact on exports from the currency drop.

While these trends certainly do not indicate an end to India’s problems, they do, however, reflect some improvement in aspects of the economy that has been worrisome for some time. Let’s plunge into them.

#1.Inflation is relatively tame: India’s headline inflation, measured by the wholesale price index (WPI), has improved significantly over time. For the year FY14 so far (April-July), WPI inflation is at 5% with the highest increase seen in July 2013 at a manageable 5.8%YoY. In fact, for FY14 so far, inflation has been subdued at sub-5% levels in three of the four months for which data is available. In comparison, for FY13, inflation averaged 7.4% YoY, and in July 2012, inflation was a still a high 7.5%. 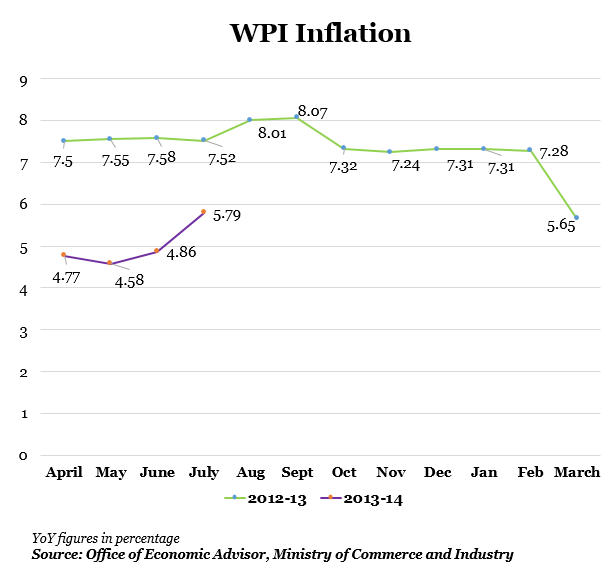 #2.Foreign trade figures are turning encouraging: India’s merchandise foreign trade numbers are showing signs of good health, going by the latest data available. Exports, which declined 1.8% YoY in FY13, have grown 2% in FY14. Figures for July 2013 are particularly encouraging, showing a growth of 11.6%. It must be acknowledged that this is just one month’s spike in export figures, so it is a bit of a wait-and-watch as to which way exports are headed next.

Nevertheless, the figures, along with the small increase in FY14 so far, are an improvement over the past year. In fact, with the sharp rupee depreciation, exports could stand to benefit. India’s exports have been hit by the prolonged global slowdown and this factor could lend some support. However, the jury is still out on whether exports can actually benefit since a number of exported items have an import component that can cancel out the currency impact. 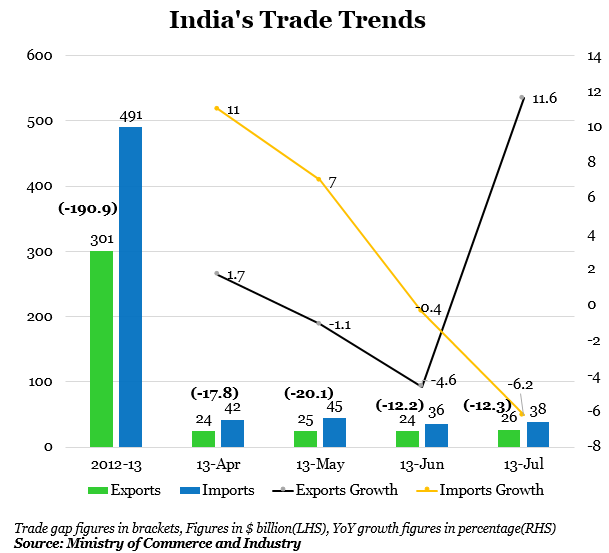 What is clear is that imported goods and services now cost more than even a month ago. After already shrinking in FY13, imports showed a small increase in the April-June period of FY14, a trend that reversed sharply in July with a 6% decline.

And this is not all. With import figures still declining in comparison with the previous year, the trade deficit has actually shrunk in July 2013 to $12.3 billion from $17.5 billion during July 2012, the first time during FY14 so far. This is good news for an economy that has a large current account deficit.

#3.Credit growth is stable: Credit offtake, or loans given out by banks, increased 16.6% YoY (for the latest fortnightly data available as on August 9, 2013) despite the economy slowing down. This is a potentially good sign, if it continues, since it suggests a step up in consumption and investment demand. This is the highest credit offtake growth seen in the financial year so far and also at par with growth in credit during the period in 2012. So far, credit growth in FY14 has ranged between 13% and 15%, which is lesser than around 17% and 19% during FY13. 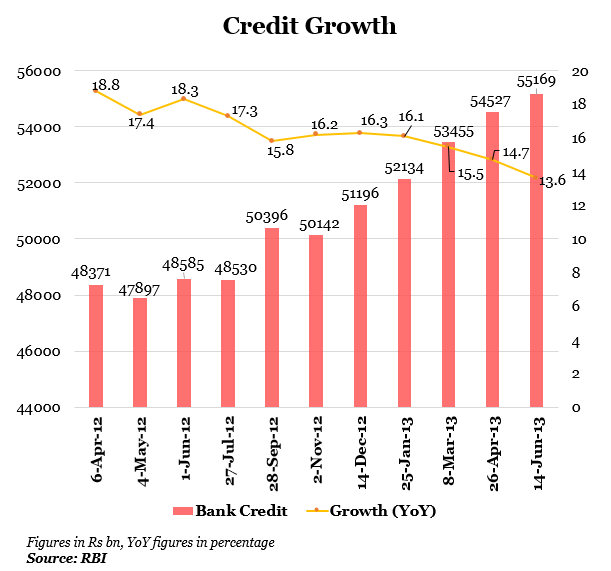 #4.Ample rainfall augurs a good agricultural harvest: In a country still dependent on South-West monsoons for a good crop, ample rains so far augur well. For the season so far, 22 of the 36 meteorological sub-divisions have reported normal rains. Rains for the country as a whole are 11% in excess of normal for the season till now.

While agriculture output depends on the spatial distribution of rainfall as much as on the quantity, the overall picture does indicate more positive news than negative. With a majority of India’s workforce employed in agriculture and related sectors and around a fifth of GDP derived from it, this is a positive for incomes and growth in Q3 and Q4 of 2013-14.

#5.Foreign Direct Investment (FDI) inflows improve: India’s total FDI inflows for Q1 of FY14 so far are up by 18% YoY to $9 billion, indicating an uptick in long-term investor sentiment potentially on account of the fact that policy was relaxed during the second half of FY13. With the rupee depreciating significantly, it remains to be seen how far the trend has sustained.

However, it is still an important trend since there has been much focus on loss of investor interest in India, and indicative of the fact that while short-term flows continue to remain unpredictable, interest in the potential of the Indian economy is still in place.

A number of economic indicators are indeed pointing in the right direction. It remains to be seen whether the current weakness in the economy will prove to be a further drag or these latest trends in major economic indicators bode well for things to come. Global economic developments could well play a part in determining the future of the Indian economy as will policy decisions in India.

A lot of folks are still feeling like the world is coming to an end. It’s understandable given the difficulty of doing business and, indeed, existence. But that wasn’t getting solved in a hurry anyway.