5 Key Lessons About Women And Work In India 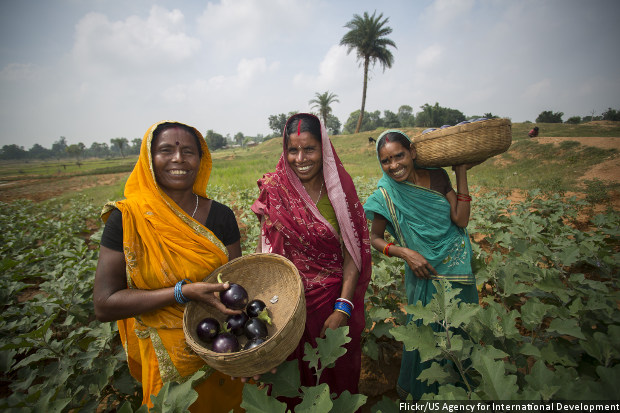 While marginally more women work in India than in Pakistan (27% and 25% respectively), Pakistan's female labour-force participation rate is growing--as India's is declining. The percentage of women working in Bangladesh is two times that in India, which ranks last among BRICS countries in terms of women's labour-force participation; among G-20 countries, it is second to last--behind only Saudi Arabia.

Why might this be? In the South Asian context, on International Women's Day, our analysis of the state of women and work in India does not offer clear explanation. Countries often experience a dip in women's labour-force participation as incomes rises and women drop out of low-paying menial work, usually in agriculture. But typically as the economy develops further and education levels rise, more and more women enter the labour force.

India's economy is well beyond the point when large numbers of women would be expected to enter the labour force, based on evidence from other developing nations. And this is no academic concern--recent estimates project that closing India's gender gap in labour-force participation would generate a 27% net increase in the Gross Domestic Product (GDP).

But despite the increasing number of women pursuing secondary and post-secondary education, India's women keep dropping out. Since 2005, more than 25 million Indian women have left the labour force.

Working outside the home is associated with a number of positive empowerment outcomes for women. At the household level, women who participate in the labour force marry and have children later, and their children stay in school longer. Even the sisters of women who work marry later.

Critically, women who work have greater decision-making power within the household, and make more decisions jointly with their partners. In work we have conducted in northern Madhya Pradesh, we document a correlation between participation in Mahatma Gandhi National Rural Employment Guarantee Act (MGNREGA) and higher self-reported levels of empowerment: Women who participate in MGNREGA report higher levels of decision-making power within their households and higher levels of mobility than women who do not participate.

On a macro-level, evidence that gender equality (and more specifically, women's increased labour-force participation) contributes to economic growth is strong. Yet women face discrimination and disadvantage across all aspects of work. They earn less, they participate less, their employment status is more tentative, and the quality of the jobs they perform is lower than men. The International Labor Organization estimates that at the global level, 48% of women's productive potential is unutilized.

The evidence on why so few women in India work--and why even more women are dropping out of workforce--is limited. At Evidence for Policy Design, research has taught us five key lessons about women and work in India:

1. Women want to work. National Sample Survey (NSS) data show that 31% of women who spend the majority of their time performing domestic duties would like some kind of job. The proportion of educated rural women who want to work is even higher: upwards of 50% would like a job apart from their domestic work. If all women who expressed a desire to work did so, Female Labour Force Participation Rate (FLFPR) in India would rise 21 percentage points (78%).

2. Jobs near home attract women. We conducted a pilot survey of rural, below-poverty-line youth in areas around Bhopal. In our study, 93% of unemployed female youth said they would take a job if they could work from home or in the village. In contrast to the national labour market, MGNREGA has seen increased participation from women over the last five years, and now employs slightly more women (52%) than men (48%).

3. Social norms are mutable, and broader economic trends and government policies matter. The Operation Blackboard initiative was launched in the 1980s, alongside a 50% quota for women teachers. Since then, the education sector has grown to employ the most women outside of agriculture.

4. Current initiatives such as Skill India, Make in India, and new gender-based quotas--from corporate boards to the police force--can spur positive change. But we need to invest in skill training and job support. More than half of women who would like a job, particularly those in rural areas, say they do not have the skills required for the work they want to do—for example, leatherwork or textile manufacturing. Further, the opportunities that exist need to be equitable. From 2010 to 2012, women's share in the manufacturing labour-force rose from 15 to 25%, but the gender wage gap across sectors in manufacturing was high--much higher than in services. To increase women's labour-force participation and wellbeing, current policies must take women into consideration.

5. Migration for employment remains an under-explored, less supported means to employ women. In one EPoD survey, 62% of unemployed female youth--similar to 68% of unemployed young men--said they would consider migrating for a job. Migration is difficult, however, and women have particular concerns that must be addressed. Despite reporting they would be willing to consider migrating for work, 69% of female youth report it is unsafe to live away from home (this time, in the context of skills training), compared to only 32% of male youth. And female respondents were more likely to report they would migrate within their district than males.

Effective strategies to increase women's labour-force participation are poorly understood. Further research is needed to explore these questions. An event called Shrinking Shakti, co-hosted by EPoD's Rohini Pande and journalist Barkha Dutt on March 7th in Delhi, convened scholars, politicians, executives, journalists, and more to discuss the question. We will be exploring the five points outlined here in greater detail through future columns. With India poised to become the largest economy in the world by 2030, it cannot afford to leave half of its workforce behind.

(Pande is the Mohammed Kamal professor of public policy and co-director of Evidence for Policy Design (EPoD) at Harvard Kennedy School. Moore is Director of EPoD India and works on a variety of research-policy partnerships aimed to bring insights from data and research to bear on public sector policies. Johnson is a Program Associate managing EPoD's India programs.)