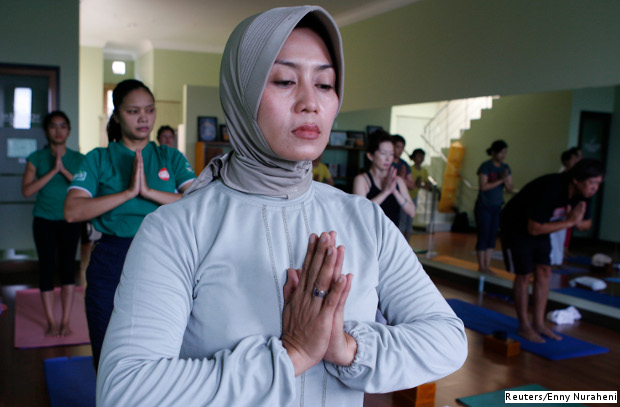 A Muslim woman attending a yoga lesson in Bandung, Indonesia. Indonesia is one of 47 Islamic nations that supported the creation of an International Yoga Day.

There are 47 Islamic nations among the 177 countries of the United Nations General Assembly (UNGA) that officially co-sponsored--with India--a resolution to establish June 21 as "International Day of Yoga".

Yoga is a 5,000-year-old physical, mental and spiritual practice rooted in Hindu tradition, a religious origin that has caused disquiet among some Indian Muslim clerics.

This is the highest number of co-sponsors ever for any UNGA resolution, according to the Union Ministry of External Affairs (MEA). The resolution was passed unopposed without a vote.

Afghanistan, Bangladesh, Turkey, Iran, Indonesia, UAE, Qatar and Oman were among the Islamic nations that co-sponsored the UN resolution.

Pakistan, Saudi Arabia, Malaysia, Brunei, Mauritiana, Cameroon, Libya and Burkina Faso were among the 8 members of the Organisation of Islamic Cooperation (OIC) that did not co-sponsor the proposal for the yoga day.

The Non-OIC members that did not co-sponsor the resolution were North Korea, Estonia, Namibia, Swaziland, Switzerland, Monaco, Solomon Islands and Zambia.

More than 35,000 people will gather at Rajpath, New Delhi, to mark yoga day. Among them will be the Prime Minister, his cabinet ministers and diplomats.

In addition, more than 1.1 million National Cadet Corps cadets nationwide will perform a "common yoga protocol", established by the Ministry of Ayurveda, Yoga & Naturopathy, Unani, Siddha and Homeopathy (AYUSH). So, too, will about 0.9 million policemen and women.

Some of the yogic postures under the common yoga protocol: 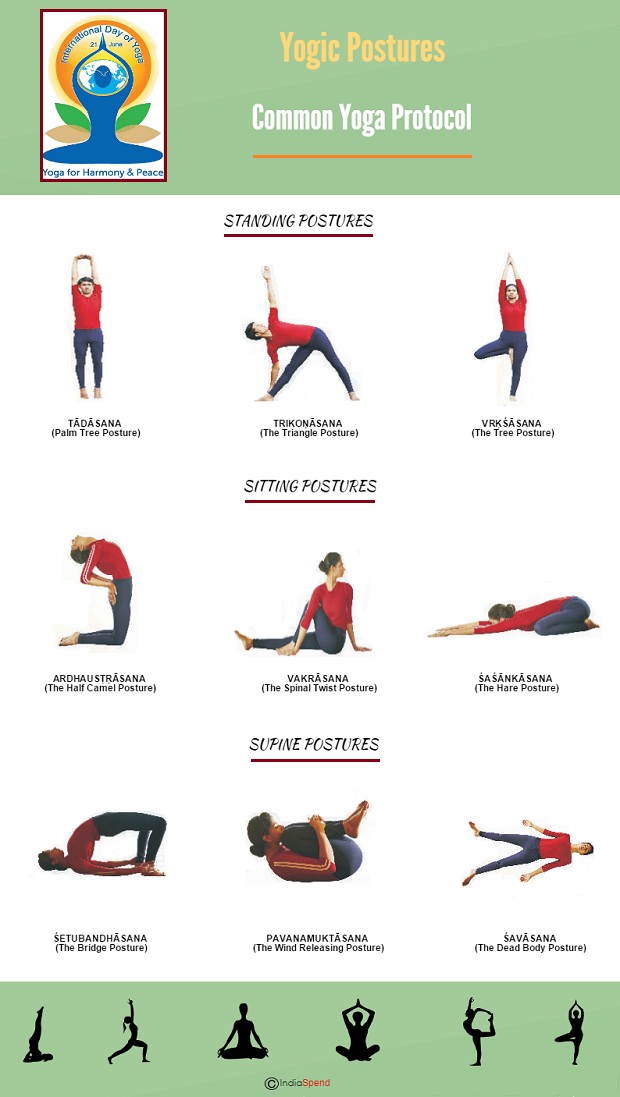 The word "Yoga" is derived from the Sanskrit root 'Yuj', meaning to join or to unite and dates to 2,700 BC, and according to this government document, considered an "immortal cultural outcome" of the Indus-Saraswati Valley Civilisation.

The government and yoga: close links

Yoga and naturopathy are widely promoted by the government of India, specifically by the AYUSH ministry.

The government has also proposed an All-India Yoga Institute. ¦