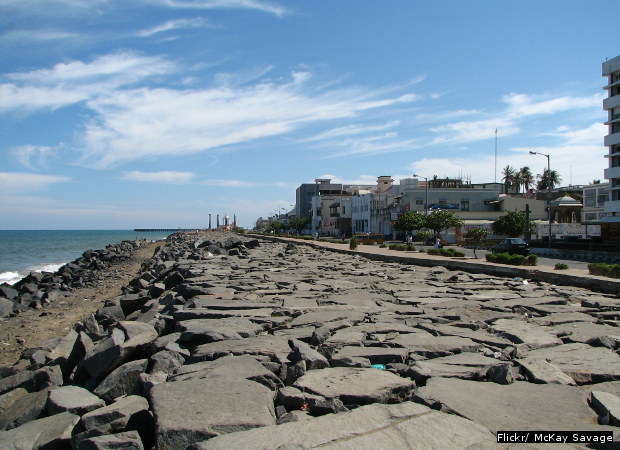 A seawall set up near Pondicherry to stop shoreline erosion.

As much as 45% of India's 8,414-km long coastline is facing erosion, according to a new study based on satellite data over 15 years, published in the Indian Academy of Science's journal Current Science.

The study--the most detailed thus far--also reports that close to 19% of the coastline is stable and about 36% is showing accretion, or expansion. The Indian coast has lost a net area of about 73 sq km.

The Andaman and Nicobar Islands face the most erosion, with close to 89% of the shoreline eaten away by the Bay of Bengal.

At the other end of the spectrum is Tamil Nadu, which has gained the most new shoreline, with 62% of its coast gaining land.

Goa has the highest percentage (52%) of stable shoreline.

Why do some regions show more erosion than others? The reasons are both anthropogenic and geographical; in other words, human activities and natural phenomena.

Shaped by wind and waves, the coast line is either convex or concave and this shape has a major bearing on coastal erosion, said Tad Murty, an oceanographer at the University of Ottawa in Canada. Murty is not connected with the Current Science study.

If the energy of incoming waves converges on a coastline, it will erode. It the waves diverge, there is little erosion. Wave energy is the main cause of coastal erosion.”

In the case of the Nicobar Islands, a probable reason for severe erosion could be the December 2004 tsunami, note the researchers. Construction of dams in catchment areas of rivers and ports, fishing harbors and jetties have sparked erosion in other areas.

An example is Palletummalapalem, Andhra Pradesh, where the coast was significantly eroded because of a reduced flow of sediment from river estuaries. "The supply was reduced because of dam construction in the catchment area of rivers,” said A S Rajawat, a co-author of the study and scientist with the SAC, Ahmedabad.

An old port created the vast Marina beach, but there's a price

Ramesh Ramachandran, one of India's leading coastal experts and the director of the National Centre for Sustainable Coastal Management, Chennai, said that the results of the new study mirror their findings on erosion along India's coastline.

He also said that “not much should be read" into the fact the Tamil Nadu coastline is witnessing the maximum accretion. Only about 25-odd km have gained in terms of beach areas; many regions are suffering erosion.

Ramachandran cites the example of Chennai's main beach, Marina, which is located at the southern end of a the century-old Chennai port. The port has caused an accumulation of sand, making Marina beach one of the world's largest. But, this excessive accumulation on the southern side has resulted in erosion on the northern side.

Coastal erosion needs to be tackled in a “holistic manner”, said Ramachandran. He is now working with the Ministry of Environment and Forests on an Integrated Coastal Zone Management Program, which cohesively considers several coastal problems, such as erosion, pollution, tourism and sediment discharge from rivers.

Ramachandran and the ministry have run successful pilots in parts of Gujarat, Orissa and West Bengal. They now hope to take the programme nationwide.

This is the first time a nation-wide inventory of shoreline changes has been prepared at a scale of 1:25,000, a measure of the map's detail.

The efforts have culminated in a shoreline atlas of India, now available with the Coastal Erosion Directorate under the Central Water Commission, Ministry of Water Resources, New Delhi.

Another aspect of of coastal erosion that needs to be considered is the time-period used to monitor the extent of erosion. “If another two time periods were used, the percentage (of erosion) would differ,” said Wong Poh Poh, a leading Singapore-based coastal expert who contributed to the 3rd, 4th and 5th Intergovernmental Panel on Climate Change (IPCC) reports.

Rajawat agreed. But the atlas is, by far, the best coastal inventory available at present, he said, urging such mapping exercises at least once every decade and for particularly vulnerable areas on an improved scale, for example, 1:10,000.