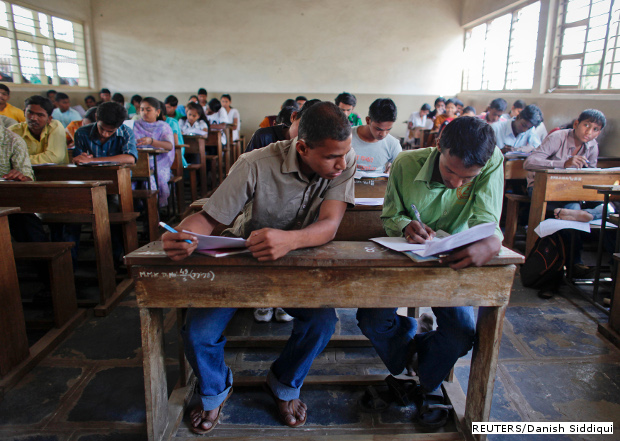 India is a political democracy, but India's society is not democratic. That has been a hypothesis offered by many social scientists.

Now there is empirical proof--from India's hope for the future, its school and college students:

* 51% college students believe women must mainly take care of the household and bring up children.

These are some of the key findings of one of the largest-ever nationwide surveys on youth attitudes, conducted by Children’s Movement for Civic Awareness (CMCA), a Bengaluru-based non-government organisation that works to nurture democratic values among young Indians.

“One of the most disturbing finding of this survey has been the negative and undesirable attitude of young people towards gender, diversity and social issues,” Dr. Manjunath Sadashiva, director, CMCA told IndiaSpend.

The only issue on which students do not appear to have regressive attitudes is the environment. More than 70% believe it is important to collect rainwater and protect lakes.

The study, one of the largest ever, revealed that youth in non-metro cities (Guwahati, Lucknow, Patna, Jaipur and Bhopal) appeared more progressive than metro cities (Bangalore, Delhi, Mumbai, Chennai, Kolkata and Ahmedabad).

Let us look at specific attitudes.

Score on Knowledge and Comprehension of Rights and Responsibility

Correctly understanding the meaning of Fundamental Right to Protection Against Exploitation

Correctly understanding the meaning of Fundamental Right to Equality

Consider themselves "Citizens" of India

The score for high school students with regards to rights and responsibility was only 27%,while it was only a tad better at 31% for college students.

Only 35% of school students consider themselves citizens of India.

Only 24% of high-school students and 29% of college students “correctly” understand the meaning of right against exploitation.

Score on Knowledge and Comprehension of Democratic Governance

Score on Attitude towards Democratic Governance

NA (Questions were not included for school students)

Do not know that legislature is responsible for enacting laws

Have fuller understanding of democracy that it is all about the rule of law, equality, human rights, and elections

Military should rule India for some years

The low score of 19% among college students on democratic governance indicates the weakness in imparting civic knowledge and lack of exposure at higher level of education.

A very large number of college students support dictatorial or authoritarian form of government, which is represented by minus 11% score on attitude towards democratic governance.

More than half (53%) of college students favour military rule in India for "some years".Faith in democratic governance is fading. The reasons: Corruption, scams, lack of policy implementation and poor governance.

Score on Attitudes towards Adherence to Civic Rules

Once again, a low score of 15% and 10% highlights disdain students have for civic rules and laws. This is reflected in the widespread violation of laws by citizens and government officials by means of bribes, breaking traffic rules and not paying taxes.

Feel it is important people reduce the wastage of water

Environmental conservation is the highest-scoring domain. This can be attributed to large-scale awareness programmes and campaigns on global warming and climate change in schools and colleges by NGOs.

Academic inclusion of environmental science as a subject could be credited for positive attitudes.

Score on Attitude towards Gender Equality

More than half of college and school students (51%) believe the main role of women is to take care of the household and bring up their children.

Giving and taking dowry is to be acceptable to 36% girls and 44% college-going boys. IndiaSpend had earlier reported that 22 married women die every day in the country due to dowry-related disputes.

Score on Attitude towards Diversity and Social Justice

Expressed intolerance regarding migrant workers from other states

Among college students, 65% do not want boys and girls belonging to different religions to meet in public places. IndiaSpend has reported on India's communal and caste divide: 72,126 riots were reported in 2013.

Among college and school students, 49% agreed that household domestic workers do not have the right to demand minimum wages and other facilities.

If equality does not appear to be valued, that could be because democracy itself appears to be a fuzzy notion.

“Young people lack the understanding of the true meaning and value of democracy. What is most disturbing is the education system that we have today is not really equipping young people with critical thinking skills which are crucial for democracy," Dr. Manjunath said. "They are being prepared to become economic or market actors rather than critical thinkers.”

An important lesson that comes out from the study, according to Dr. Manjunath, is that unless we transform the institutions we will not be able see the change.

“As a country, we are a political democracy but as a society we are not," said Dr Manjunath. "There is a huge gap. Therefore, one of the primary objectives of this research was to impress policy makers with the need to reform citizenship education.” 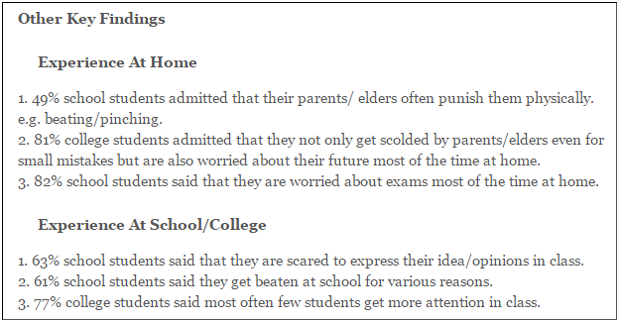 Note: This copy has been updated to reflect the correct percentage of college students who believe a woman must accept violence.