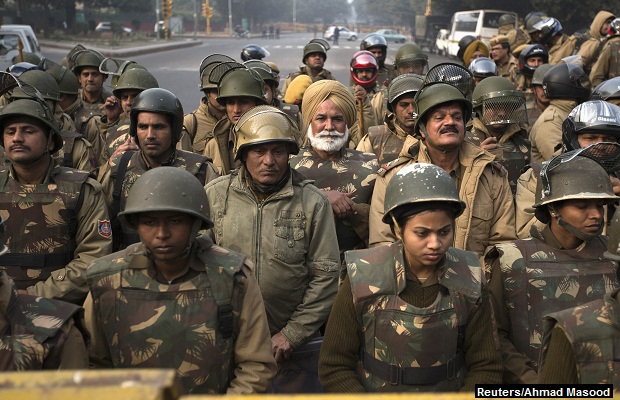 Four years after the December 16, 2012, gang-rape of a physiotherapy student that India knows as Nirbhaya, the administrative overhaul promised is fading, according to our investigation of the reform process that was to make women in India's capital safer.

The holes in police reform, and the slow progress to fill them

One of the important changes to the law recommended by the Verma Commission tasked with reforms post Nirbhaya was that female officers should record crimes against women and handle their statements.

Since that meant more female officers, the government had to allow the hiring of more women, so that they fill 33% of what are called "non-gazetted" ranks, from constable to sub-inspector. That approval came in March 2015.

There has been some progress: the female constabulary of the Delhi police grew from 3,572 in 2011 to 4,582 in 2015, according to the Data on Police organisations reports 2011-2015 of the Bureau of Police Research and Development (BPRD).

But, as we said, women are less than 9% of the Delhi Police and 6.4% of the police force nationwide, according to 2015 BPRD data. This 2014 BPRD study on national police working conditions suggested that nearly 20% of female representation would lead to better policing.

Training on "gender-sensitivity" has been slow, although police officers said there has been progress.

The first nationwide advisory on such training--which includes making police aware of discrimination and violence against women, family structures, case law, legal provisions, scientific aids and methods to handle victims--was issued in 2009, according to this 2014 reply to the Rajya Sabha, parliament's upper house.

Such training was part of the curriculum of India's police force at all levels, according to this 1993 report by the National Commission of Women and Kishan Kumar, special commissioner of police (training), Delhi Police, emphasised that “gender sensitisation is an integral component of police training”.

But there are no special funds set aside, "no separate head for budget allocation and utilisation for gender sensitisation", as Varsha Sharma, Deputy Commissioner of Police, Special Unit for Women and Children, Delhi Police put it.

"The programmes are conducted not only by police training colleges but by non government organisations (NGOs) and civil society organisations as well,” she said. There are 161 helpdesks for women across Delhi, and this response to a right-to-information (RTI) request by the writer revealed that between 2012 and 2015, the Delhi Police ran 65 courses on gender sensitisation.

In terms of crimes against women, none of this has helped.

As the chart below indicates, rapes reported in Delhi have increased 200% since 2012, the year Nirbhaya was raped, setting in motion mass protests, political promises and efforts at reform.

A comparison of Delhi police reports from 2014 and 2015 revealed a rise in the rape cases withdrawn, from 81 to 104, possibly indicating a lack of faith in the criminal-justice system, especially as cases fail judicial scrutiny.

"There is a definite need to have a steadfast and robust investigation rather than obsessing over solving cases within a week or a fortnight," said Rebecca Mammen John, a supreme court lawyer. "There is an increase in instantaneous registration, but we need to ask how far the investigation process remains as shoddy as it was before 2012. The language used by the police officers is as perverse as before. There is a dire need to follow basic protocols for investigation."

An "important weakness" in the investigative process is the lack of forensic evidence, said John. For instance, when raped women tend to urinate or wash themselves, making medical proof difficult. But an investigative process that is sensitive and robust would pay heed to evidence from fingernails (where a rapist's skin might be stuck), DNA tests markings and torn clothes.

“Many of the victims are forced to sit for hours in bloodied clothes, even after an examination, without being allowed to change/shower," said this 2013 Reuters analysis, quoting Human Rights watch report, 2010. "In most cases, no trauma counselling is given."

Other crimes against women rose 50% over the same period, from 208 to 1498, according to Delhi Police data.

Growing violence in a city of 18 million people and 866 women for every 1,000 males may be inevitable, but it is clear the police need to do more to protect women.

Women help desks are working, but many question quality of help

While the Delhi Police now have 161 help desks staffed by female officers, overwork is evident, with 70% of female officers reporting for over 8-hour shifts per day, according to this 2014 BPRD study on national police working conditions.

Those who deal with these help desks question their competence.

The view is disputed by DCP Sharma. “Women help desks are manned by lady constables who are given training as police officers and frequent training rounds. These include trainings of literacy, legal awareness, soft skill development and gender sensitivity. Trainings sessions are conducted by the police training colleges and SPUWAC. We have conducted two rounds of trainings with women help desks since January 2016 and one more round is scheduled in September. Women help desks are like an interface for the registration of complaint, they don’t function as investigative agencies. Since they have been started recently, they will gain experience with time”.

“In spite of the shocking and frightening picture, the police response to violence against women remains grossly inadequate and inappropriate," according to this 1993 NCW report. "The police officers hold several stereotypes like rape is victim-precipitated, male sexuality is an uncontrollable force and women should not arouse it.”

Chibber, the lawyer, said NGOs provide the gender-sensitivity training in police training schools and there is no standard plan or curriculum, and officers do not take it seriously.

“For many of them, it is a relaxation time or a leisure time activity," said Chibber. "The biggest failure is that there is no impact assessment exercise, no follow-up mechanism and no agency to monitor the trainings.”

There is an "imbalance" in such training, said Pratishtha Arora, a trainer at the Centre for Social Research, an advocacy. "Lower ranked women are not as empowered as their male counterparts to voice themselves," said Arora. "Thus, training itself depicts a deep patriarchal bias.”

Arora said male officers often complain, during training sessions, that female colleagues do not work as hard. "A peculiar patriarchal statement we often get to hear is, 'why pay them equally when they are not even hard working'."

Nirbhaya fund: A promise of quick response winds its way through the bureaucracy

After the Nirbhaya outrage, geo-positioning satellite (GPS) technology was supposed to be used to set up a computer response system that would locate women in distress, according to this reply in the Lok Sabha in August 2014.

The Nirbhaya Fund, started in 2013, was to fund other measures, according to this report to the Lok Sabha (parliament's lower house), including helplines, hiring professional counsellors for police stations (Rs 6.2 crore) and a building (Rs 23.5 crore) to house a special unit to address crimes against women and children.

Rs 322 crore was set aside for the nationwide emergency response project in 114 cities and crime-prone districts, but three years after approval, bidding for the project continues, according to this 2015-16 report--the latest available--from the union ministry of home affairs. While Delhi already has a helpline, the new system was supposed to be an universal emergency response for women in distress.

While the special unit has its building, there are four helplines available for women in distress: The police control room (100), an anti-stalking helpline (1091), another to report obscenity (1096) and yet another (181) to help women in distress.

"We can use as many as innovative terms but the actual reform will take place when there is rehabilitation of the victim, counselling and emotional support for the victim's family," said John, the supreme court lawyer. "The state has largely failed in the follow up mechanism. Allocation of huge funds with bleak implementation is like paying lip-service to the law, to a moment that created history."

A senior police officer, requesting anonymity, agreed. "While the contours of the policy seem exemplary, at the implementation level, it has slowed down badly....in other words, failed.”

(Chachra is an MPhil student at Delhi's Jawaharlal Nehru University. She has previously worked at Commonwealth Human Rights Initiative)