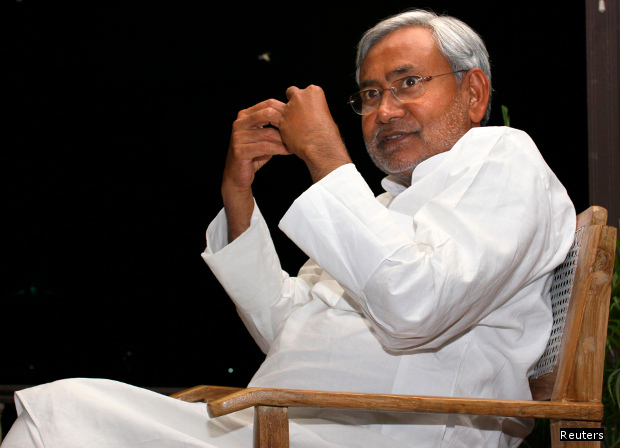 "Why were you sitting next to the persons responsible for arresting JP?" Prime Minister Narendra Modi rhetorically asked rival Nitish Kumar during his Bihar election run.

The 38-year-old JP Movement, or what is also known as the Bihar Movement, is in the limelight again, as the political battle for India's second-most populous state approaches its denouement.

Jayaprakash Narayan, or JP, was a revolutionary socialist leader, who in 1977 led a movement against the Congress party, eventually realigning India's political map.

For the first time since Independence, the Congress--thanks to the JP movement--lost power after the 1977 general elections that followed the emergency.

The Janata Party, an amalgam of anti-Congress groups, took charge of Delhi but could hold power only for two years.

Known for their caste vote-banks and implacable opposition to one another until this year, they are now allies with the Congress in the ongoing state elections.

This is ironic because the Janata Party had emerged as the opposition to the “hegemonic” rule of the Congress in the 1970s.

The story of 2015 elections: new alliances

The 2015 Bihar vidhan sabha (state legislative assembly) elections are witnessing a grand political alignment, a mahagathbandhan (grand alliance) of the JD (U), RJD and Congress.

Bihar is the third-largest state in India, home to 104 million people, sending 40 representatives to the Lok Sabha, fourth after U.P. (80), Maharashtra (48) and West Bengal (42), making it an important proving ground for national politics.

Offshoots of the Janata Party keep forming new factions and new alliances. Based on their performance in national and state elections, their status keeps swinging between national or state parties.

Another important factor was the creation of Jharkhand from Bihar in 2000, making JD (U) and RJD seats more intensely concentrated in Bihar.

National Parties – A party is recognised as a national party in India when it has candidates contesting elections to the Lok Sabha from four or more states. The party must be a state party in four or more states as well. Also, it must have won at least 2% of the total seats in the last Lok Sabha.

Update: The copy has been updated to correctly reflect the state-wise position of Bihar in terms of Lok Sabha seats.