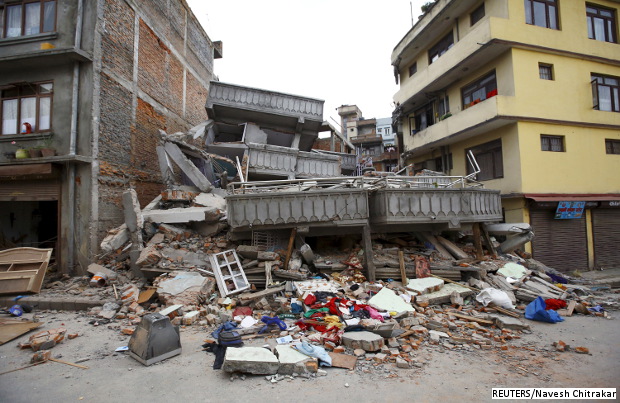 A collapsed building in Kathmandu, Nepal after an earthquake hit the region on April 25, 2015.

At least 38 Indian cities lie in high-risk seismic zones; nearly 60% of the subcontinental landmass is vulnerable to earthquakes and except for rare exceptions—such as the Delhi Metro—India's hastily-built cities are open to great damage from earthquakes.

The earthquake that devastated the Kathmandu Valley in Nepal and jolted northern India, damaging buildings as far apart as Agra and Siliguri, was expected by geologists, who have warned of more Himalayan earthquakes, caused by the growing pressures of the subcontinent grinding into the Asian mainland.

The metro is prepared, almost no one else is

Very few buildings in India meet the standards prescribed in 'Indian Standard Criteria for Earthquake Resistant Design', first published by the Bureau of Indian Standards in 1962, the latest revision being in 2005. These are not enforced, so almost no one knows such earthquake-resistant standards and guidelines for home-owners, exist.

The Delhi Metro is one of the few Indian structures built to withstand a quake. Many of the houses built in Bhuj after the Gujarat quake of 2001 are now earthquake-resistant. The rare building and high-rise may be designed for quakes.

But nothing has changed since 1993, when a relatively mild earthquake of magnitude 6.4 in Maharashtra's Latur district killed nearly 10,000 people, in what was considered a non-seismic zone. Most died because shoddily constructed houses collapsed at the first major shake, as they did in Gujarat eight years later.

The government of India today lists 38 cities in moderate to high-risk seismic zones. "Typically, the majority of the constructions in these cities are not earthquake-resistant," notes a 2006 report written by the United Nations for the ministry of home affairs. "Therefore in the event of an earthquake, one of these cities would become a major disaster."

The earth's landmasses ride like gigantic rafts on 'plates', or sections of the earth's outermost layer, the crust. These plates frequently slip and slide, causing earthquakes. We don't feel the small ones. The big ones, literally, shake us up.

The US Geological Survey (USGS) explains on its website how the magnitude of an earthquake, as measured on the Richter scale, can be greatly out of proportion to its energy and potential for devastation.

"The magnitude scale is really comparing amplitudes of waves on a seismogram, not the STRENGTH (energy) of the quakes," says the USGS. So, a magnitude 8.7 is 794 times bigger than a 5.8 quake as measured on seismograms, but the 8.7 quake is about 23,000 times STRONGER than the 5.8! Since it is really the energy or strength that knocks down buildings, this is really the more important comparison. This means that it would take about 23,000 quakes of magnitude 5.8 to equal the energy released by one magnitude 8.7 event."

Why north India is on shaky ground

The Himalayas and north India are on particularly shaky ground. Sometime in the geological past, before humans, India broke off from an ancient supercontinent called Gondwana, a name still used for what is now Chhattisgarh.

Everest base camp huge earthquaqe then huge avalanche from pumori.Running for life from my tent. Unhurt. Many many people up the mountain.

#Everest camp1 and camp 2 swept away by avalanche, many climbers missing. climbers also missing from north side as per reports. #Nepalquake

The Indian plate skewed north, displaced an ancient sea, travelled more than 2,000 km - the fastest a plate has ever moved - and slammed into the Eurasian plate, creating the Himalayas, where you can still find sea shells.

India still grinds northeast into Asia at roughly 5 cm every year. The last significant - but not geologically significant - quake in this area was the 2005 temblor in Pakistan-administered Kashmir, which sits directly atop the clashing Indian and Eurasian plates. About 80,000 died. About 60% of India is vulnerable to earthquakes caused by the great, northward grind of the Indian subcontinental landmass. 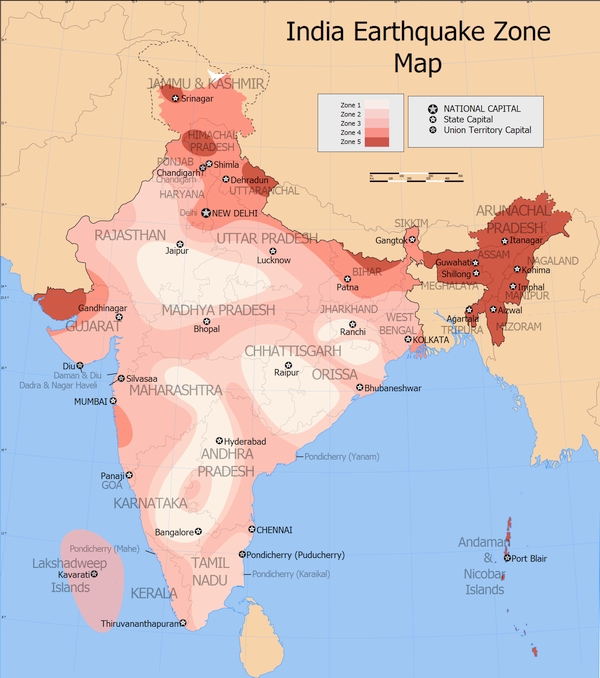 The only serious earthquake that modern India remembers is the temblor that killed about 20,000 in Gujarat in 2001. The 2004 tsunami, which resulted from the third-most most severe quake ever recorded, 9.3 on the Richter scale, occurred when the Indian plate slid with greater violence than it normally does under the neighbouring Burma plate, upon which rest the Andaman and Nicobar islands. It caused a 100-km-long rupture in the crust, thrusting the seafloor upwards and pushing up masses of water, setting off tsunamis that killed 230,000 people in 14 countries.

No Indian city has yet been hit, but risks, history serve warning

No Indian metropolis has witnessed a serious earthquake, although Delhi lies in high-risk seismic zone 4. Srinagar and Guwahati are in the highest-risk zone 5; Mumbai, Chennai and Kolkata lie in zone 3.

History serves warning that a big one may come at any time. Those lessons come from Bihar in 1934 and Assam in 1950.

The 1950 Assam earthquake, may have geologically set the stage for a really big one in the Himalayas, according to geologists. Now that 65 years have passed, it may be time for a big one.

“The world seismic community has taken advantage of the experiences from these events, but we in India have paid no heed to these reminders. Today, the number of persons interested in improving the earthquake preparedness in the country is effectively very small. Moreover, most of these persons are in the academia.”

(You can check the Indian Meteorological Department's website for the latest earthquake reports.)