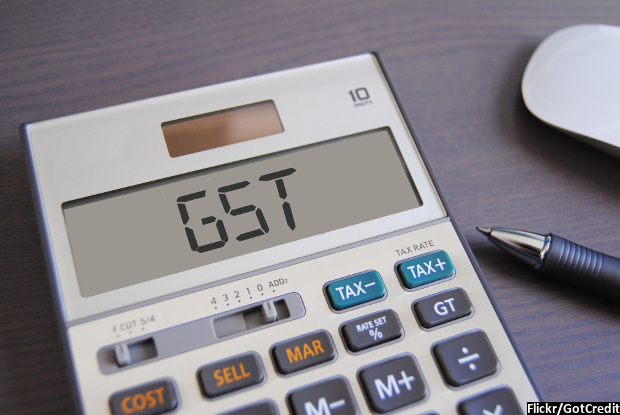 A small-scale manufacturing company with operations in only one state will have to file a minimum of 37 returns instead of the current 13 once the goods and services tax (GST) goes live from July 1, 2017,increasing work for industry, accountants and banks, according to an IndiaSpend analysis.

With the deadline for the GST less than a month away, finance professionals, banks and industry seem unprepared for the challenges of implementing the one nation-one tax idea, work towards which began 13 years ago.

“The entire ecosystem needs to be changed to accept GST,” K Raghu, former president, Institute of Chartered Accountants of India, told IndiaSpend. “An ideal date for implementation would be September 1.”

The Indian Banks Association--a body that represents 237 banks--has informed a parliamentary panel that their members were unprepared to implement the new indirect tax regime.

“Everything will now be online and will need to be updated regularly. A business will have to file 37 returns in a year (three returns per month and one annual return) per state,” the Economic Times reported on June 5, 2017. “If it does business from offices in more than one state, the number of returns will go up accordingly. A business with offices in three states will have to file 111 tax returns in a year.”

Type Of Returns To Be Filed Under Goods & Services Tax

Details
of outward supplies of taxable goods and/or services effected

10th of the next month

Monthly return on the basis of
finalization of details of outward supplies and inward supplies along with
the payment of amount of tax.

20th of the next month

18th of the month succeeding quarter

20th of the next month

13th of the next month

10th of the next month

31st December of next financial year

Taxable person whose registration has been surrendered or cancelled.

Person having UIN and claiming
refund

With the government announcing GST for four tax rates--5%, 12%, 18% and 28%--industry will face implementation challenges that include system upgrades, manpower training and understanding new taxes. Every transaction - sale or purchase - will now have to be recorded online to benefit from the tax paid earlier. 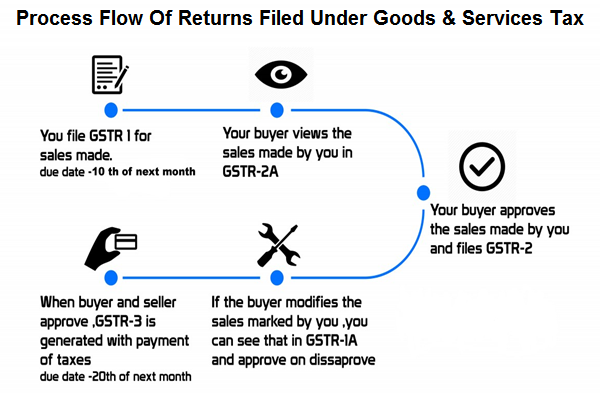 The challenges of central and state GST and federalism

India is implementing a dual GST with the centre and states together levying it on a common tax base. "The GST to be levied by the centre on intra-state supply of goods and/or services would be called the Central GST (CGST) and that to be levied by the states would be called the State GST (SGST),” according to this list of frequently asked questions published by the Central Board of Excise and Customs (CBEC), the central body of indirect taxes.

“Similarly, Integrated GST (IGST) will be levied and administered by centre on every inter-state supply of goods and services,” said the CBEC FAQ.

A dual GST adheres to the constitutional requirement of fiscal federalism, since both the Centre and states have the powers to levy and collect taxes.

While 24 states have passed state GST acts, seven have not--yet.

Understanding GST intricacies is not easy

An illustration from the FAQ published by the government: Suppose the CGST rate is 10% and the SGST is 10%. When a wholesale steel dealer in Uttar Pradesh supplies bars and rods to a construction company within the state for, say, Rs 100, the dealer would charge CGST of Rs 10 and SGST of Rs 10, in addition to the basic price of the goods.

The wholesaler would be required to deposit the CGST into a central government account and the SGST into the account of the state government.

“Of course, he need not actually pay Rs 20 (Rs 10 + Rs 10) in cash, as he would be entitled to set-off this liability against CGST or SGST paid on his purchases (say, inputs),” said the FAQ

This is where implementation challenges arise, as former ICAI president Raghu explained. Every invoice from buyers and sellers must be entered in the GST system correctly to ensure that benefits accrue down the chain.

“We have a system today across a majority of small units where an accountant comes (in) once a month, makes vouchers and inputs details for taxes,” said Raghu. “That will have to end now because we are moving to an online, almost real-time system that will need a lot of manpower.”

The finance industry is ready by training its professionals, said Raghu, who predicted many job opportunities over the next 5-6 years. But, as he added, it would take at least 12 to 18 months for the system to “settle down”.

“I do see a lot of CAs and other finance professionals being trained for indirect taxes in the coming years,” he said.

Industry, services not yet there

India’s industry and its banking system will have to change systems, train personnel and accept the extra workload for the new taxation system.

The banking system has clearly said it is not yet ready. Industry is ambivalent.

“Nearly 50% of Indian businesses are not aware of the changes that GST will usher in," Bharat Goenka, managing director, Tally Solutions, was quoted as saying in the Economic Times on June 5, 2017.

Tally accounting software is widely used by Indian companies. The company is waiting for the GST rules to be finalised, so that it can roll out its GST software for Indian companies, the Economic Times reported.

A senior official of Federation of the Indian Chambers of Commerce and Industry (FICCI), requesting anonymity because the launch date was close, said GST was “now a fact”, and industry was trying to adapt. FICCI has been conducting awareness sessions among industry verticals to help understand the new structure, he added

The industrial sector, especially the services sector, is waiting for more clarity on tax rates, processes and the time frame for the systems to settle down.

“What we still don’t know is which tax slab we fall in,” a marine service provider operating in Goa told IndiaSpend, on condition of anonymity.

“While it is good that the taxation system will be streamlined and we will not have to deal with multiple tax payments like excise, service tax and value added tax, we still don’t know how much time it will take for everybody to be on board.”

Correction: An earlier version of the story erroneously referred to K Raghu as a former president of the ICWAI. We regret the error.