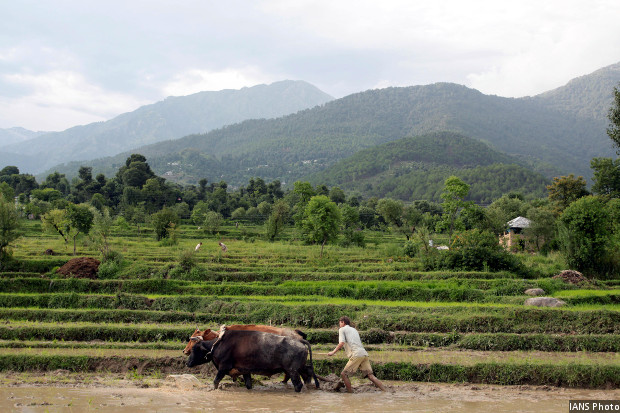 After two consecutive droughts, India received normal rainfall—2% less than the 100-year average—by the end of August 2016, but within that normality, more than a third of the country is short of rain, according to India Meteorological Department (IMD) data.

In 610 of 641 districts for which data are available, 389 districts received normal or excess rain, while 221 received "deficient" or "scanty" rain in the first three months of the four-month-long monsoon season. This means September rainfall will now be important to make up for these widespread deficits.

Still, these are best rains since 2013, when India received 14% more than the average rainfall of the June-August period.

As much as 16% of the country’s area is now rain deficient, according to IMD data.

The sowing of kharif (summer monsoon) crop was 5% more than normal by August-end because more than half of India's districts received normal rain, reiterated by the Reserve Bank of India in its 2015-16 annual report: "As on August 18, 2016, the cumulative rainfall was at its long period average (LPA) level as against 9% below LPA in the corresponding period of the previous year, leading to an increase of 6.5% in kharif (summer monsoon crop) sowing, thus far."

The monsoon deficit is greatest in northeast India, which is between 30% to 40%—repeating the situation in 2013—followed by Punjab, Haryana, Gujarat and Kerala, where the deficit is between 20% and 30% of normal.

Though the area sown is more than normal, some crops have taken a hit.

While 40% more pulses were sown than normal till the end of August, cash crops like sugarcane and cotton were 15% short of normal.

Extreme rainfall events in central India, the core of the monsoon system, are increasing and moderate rainfall is decreasing—as a part of complex changes in local and world weather—according to a clutch of Indian and global studies reviewed by IndiaSpend in April 2015.

Over a third of India—221 of 610 districts—is short of rain in a year when the government’s weather agency, the IMD, and private weather agencies, such as Skymet and Weather Risk Management Services, and international monitoring agencies, such as the European Centre for Medium-Range Weather Forecasts and the International Research Institute for Climate and Society, USA, had predicted an above-normal monsoon for 2016.

The three monsoon months of 2016 bettered the three deficit years of 2012, 2014 and 2015 but lagged 2011 and 2013, which were normal monsoon years, with respect to the proportion of districts facing rain shortfalls.

Sown area by the end of the kharif sowing season is 106 million hectare, which is achieved normally by the first week of September.

Irregular rainfall in the cotton-belts of Maharashtra and deficient rains in Gujarat has resulted in less-than-normal sowing of cotton.

The sowing of soyabean, a relatively new entrant on farms, is growing. The area under soyabean in Maharashtra was 3.9 million hectare, 0.5 million above the average of 3.4 million hectare, as of August-end.

“The cost of cultivation for cotton is high, and has risen especially after 2008-09," Ayaz Khan, a soyabean and tur cultivator from Vidarbha region in Maharashtra told IndiaSpend.

Unirrigated cotton produces a fourth to a fifth of the yield of irrigated cotton; 200 to 300 kg per acre against 1,000 kg per acre, said Khan. "Soyabean gives you assured output in less than three months without irrigation. Further, tur and soyabean require less human effort to cultivate.”