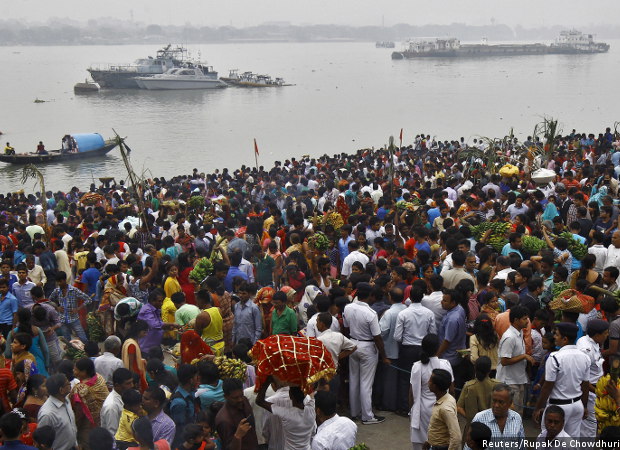 Devotees gather on the banks of river Ganga to perform rituals in Kolkata. If India’s parliamentary seats were to be re-allocated across states on the basis of population--the Constitution requires that the allocation be looked at in 2026--the Gangetic belt would send 275 of 548 MPs to the Lok Sabha, according to estimates.

From 29% today, 33% members of the Lok Sabha (Parliament's lower house) will come from three states--Uttar Pradesh, Bihar and West Bengal--within a decade, according to an IndiaSpend analysis of data in a Kotak Securities report on the demographic dividend of India's Gangetic Belt.

Uttarakhand, Uttar Pradesh, Rajasthan, Madhya Pradesh, Bihar, Jharkhand, Chhattisgarh and West Bengal are the states identified as part of the Gangetic belt. Accounting for half of India’s population, the states from the Gangetic belt have fertility rates higher than the Indian average. On an average, Bihari women of child-bearing age have 3.4 children each, and women in UP have 3.1. The average for the Indian woman is 2.3 children.

If India’s parliamentary seats were to be re-allocated across states on the basis of population, the Gangetic belt would send 275 of 548 MPs to the Lok Sabha, according to estimates.

India’s Constitution has fixed the number of MPs per state, based on the 1971 census, although it allows periodic delimitation exercises--changing constituency boundaries to adjust for population growth, so that each Lok Sabha MP represents a fairly equal number of people. States that had lower birth rates wanted to protect their political say at the Centre, and so, the numbers of MPs per state have been frozen for the last 45 years.

The Constitution currently requires that this arrangement be looked at again post 2026, the Kotak report said.

The Gangetic belt represents three of India's largest four states in terms of population--Uttar Pradesh, Bihar and West Bengal. These three states are home to a third of India’s population: 394 million of 1.2 billion.

Why state elections are important to the BJP

Bihar held the assembly elections about six months ago in October- November 2015. The Janata Dal (United) rule was restored in Bihar with the help of a Mahagatbandhan (grand alliance) with the Rashtriya Janata Dal and the Congress after swinging pre-poll predictions, IndiaSpend reported earlier.

Another state in the Gangetic belt, West Bengal, will vote in the sixth and the last phase today. Bharatiya Janata Party (BJP), the ruling party at the Centre, has only two Lok Sabha seats from West Bengal and no seats in the state assembly.

The Uttar Pradesh (UP) elections are scheduled in 2017. While the BJP swept the national elections in 2014 by winning 71 of 80 Lok Sabha seats in the state, the party sends only three members to the Rajya Sabha (upper house of Parliament) from UP.

Laws cannot be passed without the approval of both houses of Parliament, and a lack of majority in the Rajya Sabha is hurting the BJP-led National Democratic Alliance.

With the loss of elections to the Bihar state assembly, the BJP lost a chance to be better represented in the Rajya Sabha, IndiaSpend reported earlier.

An MP from the Gangetic valley represents about 25% more people than a non-Gangetic MP, according to the Kotak report.

Rajasthan has the highest proportion (2.7 million) of people represented by each MP, followed by Bihar (2.6 million), and UP and MP at 2.5 million each, which is also the average of the Gangetic belt.

With high fertility rates, the proportion of people represented per MP is estimated to rise in the Gangetic belt to 2.9 million by 2026, when the next delimitation of parliamentary seats is due.

(Tewari is an analyst with IndiaSpend. Additional research by Devanik Saha.)