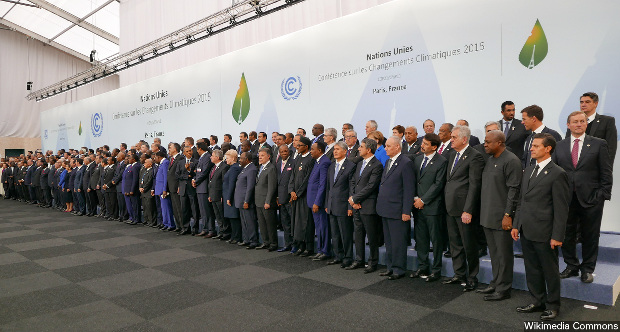 As India prepares to ratify the terms of the Paris Agreement on climate change on October 2, Gandhi Jayanti, it must prepare to fulfil a global commitment by ensuring 40% of its power capacity comes from non-fossil fuel sources by 2030, up from 30% today as per the ministry of power assessment in August 2016.

The countries who will sign the accord must reduce the focus on fossil fuels in their energy mix to 30-35% below 2005 levels by 2030. India generated 75% electricity from coal, IndiaSpend reported in May 2015; this has reduced to 61% by August 2016, according to the ministry of power.

The Paris Agreement to tackle climate change was approved by 195 countries in December 2015. The agreement will come into force in 2020; till then plans need to be formulated to bring the annual global temperature increase to well below 2 degrees Celsius.

China was the leading polluter, producing 27.3% of the world’s total carbon emissions; the US was next with 16.4% followed by India with 6.6%, according to the June 2016 BP statistical review of world energy.

India produced 13.8% of all CO2 emissions in Asia Pacific in 2015, the second largest contributor behind China (57%).

Although its per capita emissions are roughly one-twentieth of the average global level, IndiaSpend reported in May 2015, India houses one sixth of the world’s population. The average citizen of the UK, Germany, Canada, and the US pollute between five and 12 times as much as an average Indian.

India has the fourth largest wind power capacity in the world (29,000 MW).

Challenges will emerge as India continues to develop

Deforestation in urban areas is predicted to lead to several Indian cities with trees on less than 5% of their land areas, IndiaSpend reported in March 2016.

When trees are cut, they release stored CO2, and they can no longer absorb the same during photosynthesis. As much as 3 billion tonnes of CO2, or 10% of the world’s heat-trapping emissions, come from deforestation, according to this December 2013 note by Union of Concerned Scientists.

As India develops, Co2 emissions will rise, IndiaSpend reported in a three-part series in May 2015 (Read it here, here and here).

Despite problems, the government has outlined ambitious targets: as much as 50% of power capacity could come from non-fossil, environmentally-friendly sources, Business Standard reported in September 2016.

The transition will be costly, and the focus now will be on working with developed nations to acquire funding and identify affordable technology.

Developed nations are committed by the terms of the Paris agreement to support developing nations.

Help from developed nations may not come—a particular danger being the presidency of Donald Trump, who could and seemingly would renege on the USA’s commitment were he elected, the BBC reported in May 2016.

It is for these reasons that the union cabinet has inserted caveats, conditions into their acceptance of the agreement, Business Standard reported in September 2016.

So, if the global situation changes and other countries are not fulfilling their commitments, India can review their position rather than risking their development targets.

India is the 12th country to take this position, and it is unclear whether this will undermine the accord’s success.

Update: This story has been modified to reflect the correct figures on wind power capacity in India.