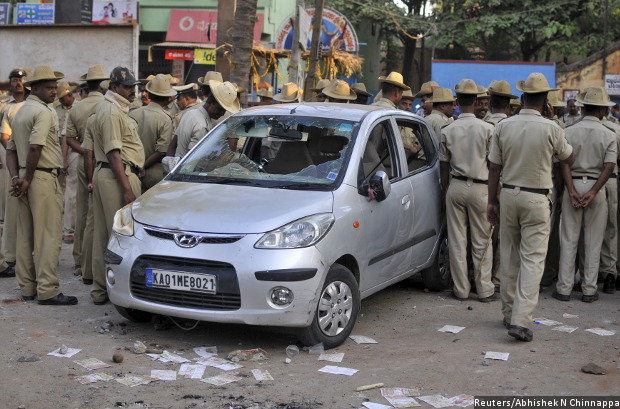 Policemen stand next to a damaged vehicle after a protest by garment workers in Bengaluru on Tuesday.

Bengaluru's garment workers--about half a million of them, mostly women--have no pensions, job security, health insurance and live life close to the poverty line. This hitherto silent mass was suddenly agitated by a central government order to restrict early withdrawals from the Employee Provident Fund (EPF), a financial security net.

The Employee Provident Fund has been around since 1951, a law passed by India's Parliament, requiring employees to contribute a fixed proportion of salary to their EPF account, with the employer matching this contribution. Here's how it works:

The employee earns an interest of 8.75% compounded annually on the money accumulated in her EPF account.

In this year’s budget, Finance Minister Arun Jaitley announced that EPF would be taxed when claimed--to prevent savings from being used before retirement--a move he had to rollback. People did not want the government denying them access to their savings.

There are 65.6 million active EPF accounts-- both public and private sector--according to this August 2015 Employee Provident Fund Office (EPFO) newsletter.

Until the controversial order, workers could withdraw all their EPF money, with interest, if they were unemployed.

Now, EPF holders cannot withdraw all their money for marriage, education of children, serious illnesses and buying property, according to this notification issued on February 10, 2016.

The order was a blow to garment workers, who need money at intervals for precisely the reasons mentioned above.

The new order says you can withdraw all your EPF money only at retirement, the age of which has been increased from 55 to 58. This rule has now been suspended until July 31, 2016.

India's formal, or organised, workforce comprises 28.9 million workers, with secure employment, pension and medical benefits. Of these, 40% (11 million) work in the private sector, according to government estimates.

The 40% private-sector employees we referred to are only those the government’s statistical agencies categorise under the organised sector. Of these, 92% have no income security, pensions or health insurance, an IndiaSpend analysis has shown. Garment workers are among this insecure population, which needs regular access to EPF accounts for vital life needs.

While many private-sector workers, such as those in the garment industry, lead precarious lives, they are better off than their compatriots in the unorganised sector.

Much like workers in the private sector, those in the unorganised sector also depend on money from EPF accounts--if at all they have such accounts--to get by.