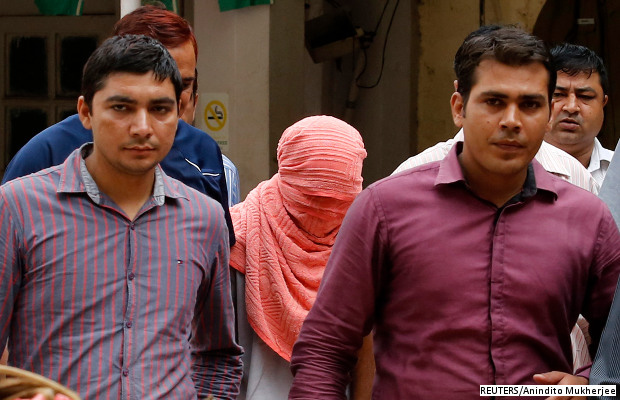 The Indian teenager (head covered by towel) who took part in the gang-rape of a Delhi student in Dec. 2012 being escorted out of a juvenile court in Aug. 2013

Rape was the fastest-growing crime among juveniles, 86% of teens arrested for various crimes come from poor families, only 6% were homeless and less than 6% were girls, reveal crime data for 10 years.

Arrests of juveniles in the age group 16-18 increased 60% from 2003 to 2013, the highest among all three juvenile age groups, according to data from the National Crime Records Bureau (NCRB), a division of the home ministry.

Juvenile arrests for rape rose 288% over this period and arrests for theft increased 68%, the data showed.

Contrary to popular belief that juveniles from broken homes commit the most crimes, 81% of teens arrested in 2013, lived with their parents, the data reveal.

The figures lend perspective to an unfolding national debate around a cabinet decision to enact a law that proposes trying juveniles as adults.

The demand for such a law arose after a 17-year-old was sentenced to three years in a reform facility, after he and five other men gang-raped and battered a physiotherapy student in a Delhi bus on December 16, 2012.

The proposed law provides, in the case of heinous crimes allegedly committed by adolescents aged 16 to 18, for examination by a Juvenile Justice Board to assess if the suspect should be regarded as child or adult.

As mentioned earlier, juveniles living with parents accounted for more than 80% of arrests, 35,244 in 2013, according to an NCRB report.

As many as 8,392 juveniles arrested were illiterate, and 13,984 had gone to primary schools.

When juveniles arrested are beyond the law

As many as 379,283 minors were arrested in the period 2003-13 under the Indian Penal Code (IPC) and special and local laws, according to the NCRB. 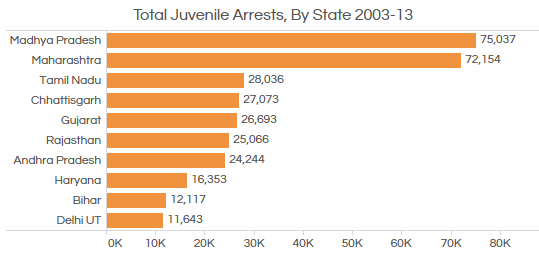 Similarly, arrests on the charge of assaulting a woman “with intent to outrage her modesty (Sec. 354 IPC)” and “insult to modesty of women (Sec. 509 IPC)” rose 117% compared to the previous year.

Parliament will now decide if juveniles can be tried as adults.

One of the major amendments include removal of a clause in the law that relates to the trial of a person above the age of 21 years as an adult for committing serious offences when the person was between the ages of 16 and 18.

The amendment also increases the period of preliminary inquiry by the Juvenile Justice Board in case of heinous offences committed by children aged 16 to 18.

The amendment to the Juvenile Justice (Care and Protection of Children) Bill, 2014, will be introduced in the current session of Parliament.

How the law treats juveniles in the USA, UK and China

China: The general age requirement for bearing criminal responsibility under Chinese law is 16. A person aged from 14 to 16 bears criminal responsibility in intentionally committing serious criminal offenses spelt out in the criminal law, including homicide, rape and robbery. An offender aged from 14 to 18 is given a lighter or mitigated punishment. There is no criminal punishment for an offender under the age of 14.

United Kingdom: The minimum age of criminal responsibility in England and Wales is currently 10. Those below this age are considered incapable of forming criminal intent. Children arrested for crimes in England and Wales and held in custody, must be separated from the adult population of the jail. The general principle for children charged with crimes is that they should not be held in police custody but instead be taken care of by social services in local authority accommodation.