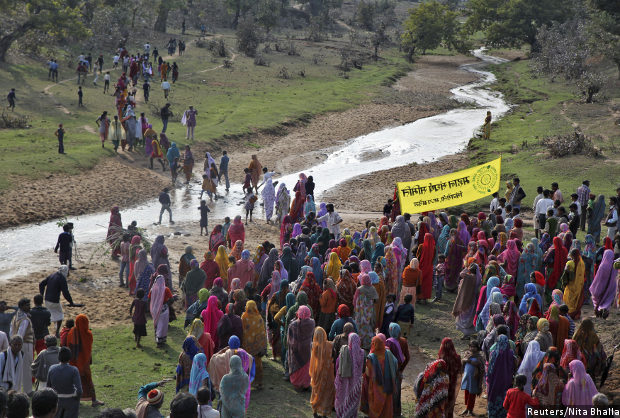 Indian villagers walk towards the Mahan forest during a protest against a coal mining project in Singrauli district, Madhya Pradesh. Of the 14,000 sq km of forests cleared over the past three decades in India, the largest area was given to mining (4,947 sq km), followed by defence projects (1,549 sq km) and hydroelectric projects (1,351 sq km).

Over the last 30 years, forests nearly two-thirds the size of Haryana have been lost to encroachments (15,000 sq km) and 23,716 industrial projects (14,000 sq km), according to government data, and artificial forests cannot be replacements, as the government recently acknowledged.

The government's auditor has said conditions under which these projects are given forest land are widely violated, and experts said government data are under-estimates.

“It (government figure) is just the tip of the iceberg," T.V. Ramachandra, associate faculty, Centre for Ecological Sciences, Indian Institute of Science, Bangalore, said. "Our study shows dense forest areas in northern, central and southern Western Ghats have decreased by 2.84%, 4.38% and 5.77% respectively over the last decade.”

Currently, up to 25,000 hectares of forests--250 sq km, or more than twice Chandigarh's area--are handed over every year for "non-forestry activities", including defence projects, dams, mining, power plants, industries and roads, the government recently told Parliament. The rate of "diversion", as the process is called, varies across states.

Punjab diverted about half its forest land since 1980, compared to Maharashtra, West Bengal and Tamil Nadu, which diverted less than 1% of their area.

India's forests now cover 701,673 sq km, or 21.34% of the country, compared to 640,819 sq km 29 years ago, according to the India State of Forest Report, 2015, the latest available. The rise is explained by planted trees, particularly as monocultures, which do not replace the diverse, natural forests that are permanently lost.

India's forests increased over the last 13 years, according to data from Indian State of Forest Reports. Such increases are an “outcome of statistical jugglery and the use of flawed definitions by India's forest bureaucracy”, the Economic Times commented in 2012.

Defence projects and dams get most forest land

With 11% of India's forests, Madhya Pradesh has the largest area under forest cover, followed by Arunachal Pradesh (10%) and Chhattisgarh (8%). Forests cover more than 70% of the area of the northeastern states, except Assam where it is 35%.

Forests must largely remain inviolate and can only be diverted as exceptions, according to the Forest Conservation Act, 1980.

Of the 14,000 sq km of forests cleared over three decades, the largest area was given over to mining (4,947 sq km), followed by defence projects (1,549 sq km) and hydroelectric projects (1,351 sq km), according to data from the Compensatory Afforestation Fund Management and Planning Authority (CAMPA), run by the ministry of environment and forests.

Of the 15,000 sq km of forest lost to encroachment, the greatest loss was reported in Madhya Pradesh, followed by Assam and Karnataka. Some states, such as Kerala, Andhra Pradesh and Bihar, have curtailed such encroachment.

"Compensatory afforestation" is the term used to describe the trees that must be planted as compensation for forests cut down, which requires special permission from the ministry of environment and forests.

Experts criticised compensatory afforestation as an "unscientific" and "flawed concept". The loss of forests is not a loss of trees alone but the collapse of an ecosystem, said Samarpita Roy, PhD scholar in environmental science from Pune University.

The government may claim planted trees compensate for forests lost, but that does not mean complex flora and fauna destroyed have been restored, said Roy.

Of 14,000 sq km of forests cleared since 1980, 6,770 sq km were planted anew, or afforested, according to the latest government data. As the second part of this series reveals, the process of afforestation is faltering, with no more than 6% of a fund set aside for the purpose used.

“It is not possible to compensate (the) loss of a natural forest, at least for centuries,” said Ajay Kumar Saxena, Programme Manager (Forestry) at Delhi's Centre for Science and Environment, an advocacy.

A forest has thousands--even millions--of species of flora and fauna living in a complex “ecological mix”, with natural nutrient cycling processes that “cannot be restored by creating monoculture plantations”, said Saxena.

Why Uttarakhand suffers so many leopard attacks

Arunachal Pradesh has cleared the most forests over 30 years (3,338 sq km), followed by Madhya Pradesh (2,477 sq km) and Andhra Pradesh (1,079 sq km), according to Ministry of Environment and Forests data. Jammu & Kashmir, Tamil Nadu and West Bengal have released the least forest land for non-forest uses.

Many projects are allowed within forest land, and that is a process disruptive of both human and animal lives.

“Whenever a developmental project goes inside the forest, it results in fragmentation, the breaking up of large forest blocks into smaller patches, which permanently destroys habitat for many species,” said Roy.

Fragmentation is one of the most serious threats to long-term Indian biodiversity conservation, former National Board of Wildlife members Praveen Bhargav and Shekhar Dattatri wrote in The Hindu earlier this year. It is a driving reason for growing human-animal conflicts across India.

Leopards attacked 550 people in Uttarakhand, killing 198, between 2001 to 2010, according to Wildlife Conservation Society data.

The legal diversion of forest land is accentuated by illegal actions, which means many who get permission to cut down forests ignore the conditions imposed on them.

The ministry of environment and forests failed to "appropriately discharge" its responsibilities in monitoring forest-clearance laws related to diversion, said this 2013 Comptroller and Auditor General report.

“In our opinion (the) penal clause prescribed in the Forest (Conservation) Act, 1980, was largely inadequate and ineffective to put (sic) any deterrence towards illegal and unauthorised practices,” the CAG report said. “Numerous instances of unauthorized renewal of leases, illegal mining, the continuance of mining leases despite adverse comments in the monitoring reports, projects operating without environment clearances, unauthorized change of status of forest land and arbitrariness in decisions of forestry clearances were observed.”

The IISc's Ramachandra illustrated how a project that did not do what it should have caused widespread ecological destruction: “A vast tract of forests with evergreen species in central Western Ghats was given on lease to a paper industry," he said. "These forests were replaced with monoculture plantations that affected the livelihood of forest-dependent communities.”

“A nexus of contractors, politicians and some corrupt forest officials is responsible for this situation," said Ramachandra. "Scarcity of water and food insecurity is evident in many districts which have witnessed large scale deforestation with irresponsible forest diversions.”

Experts said projects in forests should share benefits with people, and compensatory afforestation should factor in local livelihoods. "Plug all pilferages by proper accountability at all levels, adopt ecosystem approach and continuous ecological monitoring in Compensatory Afforestation,” said Saxena.

Most experts said that, as far as possible, dense forests shouldn’t be diverted for developmental projects; and if the forest is diverted, the land should be afforested with native flora to reduce the impact of forest loss.

Correction: The story has been corrected to reflect that Samarpita Roy is a PhD scholar in environmental science from Pune University.

This is the first of a two-part series. Next: Only 6% Compensation To Repair Destroyed Forests Used