2017: Five Things That Should Worry India 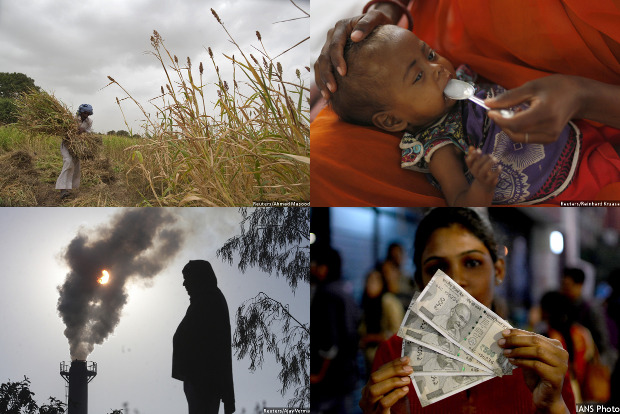 In 2015, IndiaSpend wrote about five things that should worry India in 2016--slow growth in agriculture, climate change and the danger of drought, malnutrition, illiteracy, and reduced growth and trade forecasts. As 2016 comes to a close, we analysed the status of these five problems, and challenges that will continue in 2017.

Recovering from two--and some places even three--consecutive drought years, agriculture, for the first time since 2013, saw a growth of above 3% in the second quarter of 2016-17, over the same period in 2015-16. 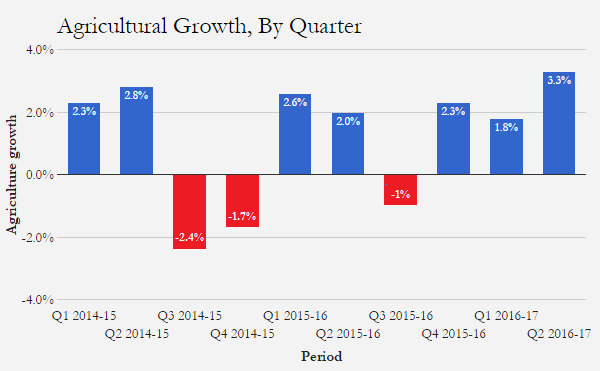 Record summer crop production of rice, at 93.8 million tonnes, and pulses, at 8.7 million tonnes, is estimated in 2016-17, according to advance estimates by the agriculture ministry.

But the withdrawal of old Rs 500 and Rs 1,000 notes in November 2016 has been a setback to the rural economy--on which 800 million people, or 65% of India’s population, depend--largely driven by cash.

Vehicles entering a rural market yard in Maharashtra dropped, onion prices halved in the biggest onion market in the country, the fishing economy in Goa faced roadblocks, and flower farmers in Madhya Pradesh lost business, as IndiaSpend’s visit to these regions revealed.

Similar reports from Uttar Pradesh, Odisha and other parts of the country appear to have dampened the bright agricultural prospects of 2016. But there is hope that cash pressures will ease in the long term, and the rural economy will be back to normal, according to a Livemint report.

2. Good monsoon; India signs climate change agreement; India has half of the world’s 20 cities with the most toxic air

From a severe drought in 11 states in June just before the arrival of the monsoon, India--barring Punjab, Haryana, Gujarat and Kerala--received normal rains in 2016. Rajasthan, Madhya Pradesh and Maharashtra received 20% more rain than normal.

Overall, rainfall patterns have become more irregular over the last decade. Extreme rainfall events in central India, the core of the monsoon system, are increasing and moderate rainfall is decreasing--as a part of complex changes in local and world weather--according to a clutch of Indian and global studies, as IndiaSpend reported in January 2016.

In 2016, India ratified the Paris Agreement, under which countries agreed to take steps to limit the rise of the earth’s temperature to under two degrees Celsius by the year 2100.

India also signed a legally binding international agreement, starting 2028, to phase down the production and consumption of hydrofluorocarbons (HFCs)--gases that can have global warming potential up to 12,000 times more than carbon dioxide (CO2)--as IndiaSpend reported in October 2016.

Still, India will have to do more to prepare itself for the effects of climate change in the future. Between 2030 and 2050, a study, conducted by the University of Oxford, projected 136,000 climate-related deaths in India, according to an answer given by the environment ministry in the Lok Sabha (lower house of Parliament).

Even as CO2 concentration levels in the world breached 400 parts per million, levels that will last our lifetime, thick smog engulfed the nation’s capital and other northern states, with the concentration of toxic particles reaching up to 45 times above safe levels set by the World Health Organization (WHO).

Between 2011 and 2015, in a comparison of megacities with a population above 14 million, Delhi’s ambient air-pollution levels were worse than Beijing and Shanghai, according to an IndiaSpend analysis of 2016 WHO data. Indian cities make-up half of the world’s 20 most toxic cities, according to data from the WHO.

Even with declining child undernourishment rates, India is home to over 40 million stunted children under five, more than any other country in the world, IndiaSpend reported in January 2016. Stunting refers to low height for age.

India ranks 120 out of 130 countries in prevalence of wasting (15.1%), or low weight for height, according to the 2016 Global Nutrition Report, which ranks countries from lowest to highest prevalence.

At current rates of decline in malnutrition, India--currently lagging behind several poorer African countries--will achieve the current stunting rates of Ghana or Togo by 2030, and that of China by 2055, stated the report.

India also does poorly on indicators that could help reduce malnutrition.

For instance, there is a link between improved health of the mother and lower stunting prevalence in children under five, IndiaSpend reported in January 2016. States such as Goa and Kerala, with 99% of institutional deliveries, had amongst the lowest levels of stunting in the country. But Uttar Pradesh and Bihar, states that have some of the highest levels of stunting, have just about 65% institutional deliveries.

Improved sanitation also impacts the health of children, as seen in the state of Mizoram, which reported a 13% decline in wasting prevalence and 5% decline in underweight children in ten years, when there was a 10% improvement in household access to a toilet, IndiaSpend reported in January 2016. Still, there are 93.1 million households in rural India without access to a toilet.

4. Education budget rose 4.8%, but millions are dropping out before secondary school

Last year, we wrote about how India had reduced its education budget, even though the country has 282 million illiterate people--equivalent to the population of Indonesia--and 18% of those who went to school were unable to complete secondary school.

Net enrolment in primary education, the number of primary age school children enrolled in school, as a proportion of the total primary school age population, remained constant: 87.3% in 2015-16 compared to 87.4% in 2014-15, according to District Information System for Education data.

Trade and growth forecasts for 2016 were lower than that of 2015, while declining wholesale inflation was not being passed to consumers, IndiaSpend had reported in December 2015.

The move to demonetise Rs 500 and Rs 1,000 notes, announced by Prime Minister Narendra Modi, on November 8, 2016, is likely to slow down economic activity in 2017, but some experts say claims are exaggerated.

Gross value added (GVA) growth for the financial year 2016-17 has been revised to 7.1% from the earlier estimate of 7.6% due to demonetisation, the Reserve Bank of India (RBI) said in its fifth bi-monthly monetary policy statement issued on December 7, 2016. Demonetisation is expected to affect cash-intensive sectors such as retail and transportation and reduce demand due to adverse wealth effects.

Ambit Capital, a financial services firm, slashed its growth projection for the current year by 330 basis points to 3.5, BloombergQuint reported on December 19, 2016.

Consumer inflation is expected to remain in single digits (5% in December 2016-March 2017 quarter), but there is a risk it could increase, the RBI said, due to volatility in global crude oil prices, increased turbulence in financial markets and the effects of demonetisation.