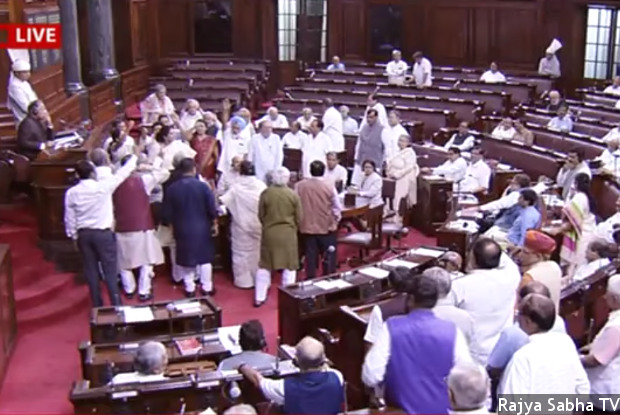 Frequent interruptions over notebandi marred the Parliament’s 2016 winter session--the least productive in 15 years--according to an analysis by PRS Legislative Research, a think tank.

The loss of productivity (the hours spent without interruptions during the scheduled working hours) to the Lok Sabha, parliament’s lower house, was 83%, while it was 80% in the Rajya Sabha, the upper house, according to government data.

In the 2016 winter session, 92 hours of disruption in the Lok Sabha cost the Indian taxpayer Rs 144 crore, IndiaSpend reported in December 2016.

In the budget and monsoon sessions, the Lok Sabha recorded 100% productivity.

Here are some important bills pending in both the houses:

It aims to prevent the exploitation of surrogate mothers and protect the rights of children born through surrogacy. The Bill also allows a close relative of the couple between the ages of 25 and 55 years to act as the surrogate.

A provision preventing foreigners, homosexual couples, singles, live-in couples and those married for less than five years from seeking surrogacy has been criticised, The Hindu reported in September 2016.

India is attempting to regulate surrogacy without having adequate information about the larger assistive reproductive technology industry, IndiaSpend reported in October 2016.

The Bill, which deals with the welfare, safety and health of workers, proposes to amend the Factories Act, 1948, so that state governments can regulate overtime hours and increase overtime limits to 100 hours from 50 hours in a quarter.

The Bill further allows the state and central governments to increase overtime hours in the public interest to 125 hours per quarter from 115 hours.

Under the current law, all wages must be paid either in coin or currency notes or both. While employers may also pay wages using cheques or crediting it to bank accounts, written consent from employees is necessary.

The new Bill proposes to dispense with written authorisation for cashless payment of wages through cheques or bank accounts.

It also allows state governments to specify industrial or other establishments that may adopt digital methods for salary payments.

Andhra Pradesh, Uttarakhand, Punjab, Kerala and Haryana have already made state amendments to the Act.

The Bill was put forward in the winter session of parliament amid tense discussions on notebandi. These amendments would help curb complaints of non-payment or less payment of minimum wages, and also aid the objectives of a digital and cash-less economy, the Bill states.

Status: Pending in Lok Sabha. The central government issued an ordinance (valid for six months) on December 21, 2016, to allow cashless payment of wages.

The Bill, introduced in the Rajya Sabha during the monsoon session, seeks to amend the Maternity Benefit Act, 1961, to extend maternity leave from 12 weeks to 26 weeks for all women.

If a woman already has two or more children, she will be entitled to 12 weeks of leave.

For a woman legally adopting children younger than three months, or a “commissioning” mother--“a biological mother who uses her egg to create an embryo implanted in any other woman”--12 weeks of maternity leave will be granted from the date the child is handed over.

The Bill also allows women the option to work from home if the “nature of work assigned” to her permits this after she avails of the maternity benefit. The employer and the woman may mutually agree upon the period and related conditions.

Every establishment with 50 or more employees is also mandated to provide a crèche for employees’ children within a prescribed distance. Employers will allow women four visits a day to the facility, which includes rest periods.

It allows cashless treatment of road accident victims during the “golden hour” following a traumatic injury, when prompt medical care can prevent death.

The Bill raises compensation for victims of hit-and-runs, from Rs 25,000 to Rs 200,000, and provides a compensation upto Rs 10 lakh to the families of those who die in road accidents.

Penalties for several offences under the Act have also been raised. For example, the penalty for drunken driving will now be Rs 10,000 instead of Rs 2,000, while the penalty for overspeeding is proposed to be raised to Rs 5,000 from Rs 500.

The Bill also protects “Good Samaritans”, who in good faith, voluntarily and without expectation of any reward or compensation, render emergency medical or non-medical care or assistance at the scene of an accident to the victim or transporting such victim to the hospital. Such persons, the Bill states, shall not be liable for any civil or criminal action for any injury to or death of the accident victim that may have resulted from their negligence.

The Bill addresses the advent of aggregator services or digital intermediaries, such as Uber and Ola, mandating licenses for these aggregators and other provisions, apart from requiring them to comply with the Information Technology Act, 2000.

Status: Pending in the Lok Sabha

Here are some of the important bills passed in both the houses:

First introduced in the parliament in 2014, the Goods and Services Tax (GST) Bill proposed to introduce a comprehensive indirect tax levy on manufacture, sale and consumption of goods. It is set to replace other indirect taxes levied by state and central governments; 23 states have ratified the Bill that will come to effect from April 1, 2017.

2. The Rights of Persons with Disabilities Bill, 2014

The Bill provides for targeted delivery of financial subsidies directly to the bank accounts of residents of India through a unique identity number or Aadhaar number. Though it is not mandatory yet, the government may ask for the Aadhar number as a means to verify the identity of the resident. The Unique Identification Authority of India, which issues the Aadhaar number, is not allowed to share the information collected, except in the interest of national security or under court orders.

The Bill, introduced in the budget session of the Rajya Sabha, seeks to protect the interest of home buyers and allottees by raising transparency, accountability and efficiency in the real estate sector. The Bill enforces the contract between the developer and buyer and provides a fast track aid to settle disputes.

For example, it provides for mandatory registration of real estate projects with the Real Estate Regulatory Authority (Regulatory Authority) of each state. This is to hold builders/developers accountable. Real estate brokers and agents, intending to sell any plot, apartment or building must also be registered with the authority.

The Bill also mandates disclosure of all information for registered projects, such as details of promoters, layout plan, land status, schedule of execution and status of various approvals.

The Bill is important as no more than 3.5% of India’s trade takes place through waterways, DNA reported in March 2016. In comparison, waterways-linked trade in China is 47%; 40% in Europe, 44% in Japan and Korea and 35% in Bangladesh.