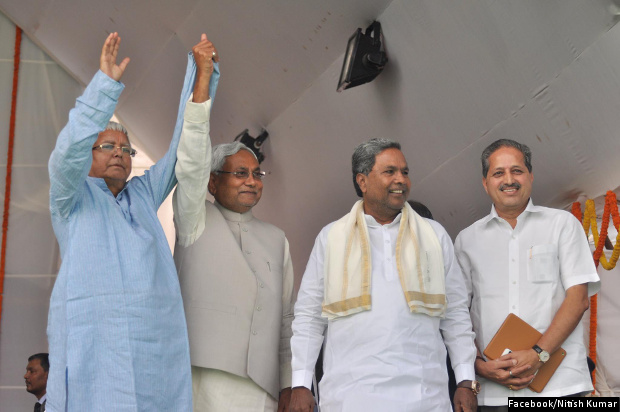 The year 2015 has been a blessing for political parties other than the Bharatiya Janata Party (BJP), in the same way 2013 and 2014 were exciting for the BJP.

The Indian National Congress could not rise from the ashes, while regional parties improved their political stature.

The Rashtriya Janata Dal (RJD) rose from political wilderness to become the single largest party in Bihar. The Aam Aadmi Party (AAP) broke electoral records in Delhi by virtually wiping out the opposition. Nitish Kumar’s Janata Dal (United), JD (U), came in second but won the battle of political ideology.

The Lok Sabha election in 2014 saw a convincing majority after 30 years. The three preceding state elections in 2014—Madhya Pradesh, Chhattisgarh and Rajasthan—also led to electoral majorities.

The four assembly elections after May 2014—Maharashtra, Haryana, Jharkhand, and Jammu and Kashmir—sent the BJP to power, either as a partner or alone. The party succeeded on its own where it was largely a two- or three-cornered fight, while success faded where it was four-cornered.

The year 2015 saw the opposite, with convincing victories to the AAP, the RJD and the JD (U). These victories were more convincing than those of the BJP in 2014, akin to the BJP's victories in the 2013 MP and Rajasthan assembly elections.

The elections of 2015 were evidence that the electoral tide could be turning away from the BJP.

The BJP: Some triumphs, many setbacks

After the triumph of 2014—when it got a national vote share of 31% and 282 of 543 parliamentary seats—the BJP's vote share and seats won in state and local elections indicate a declining trend.

In the Maharashtra municipal polls, the BJP either failed to become the single-largest party (Kalyan Dombivali Municipal Corporation), or was denied power by a united opposition (Kolhapur Municipal Corporation). In three other local bodies, it came third (Aurangabad), fourth (Navi Mumbai) and won a single seat (Vasai Virar).

In Kerala, the BJP became, for the first time, the second-largest party in the Thiruvananthapuram Municipal Corporation, surpassing the Congress-led United Democratic Front. In five other corporation elections, it did not figure in the top two.

While the Congress gained some support by opposing land-law reform and heightened communal rhetoric after the BJP came to power, 2015 offered little respite to the 130-year-old party.

Delhi voters gave no seats to the Congress, while Bihar voters gave it 27 seats—68% of the seats the party contested. That it could contest only 17% of seats in Bihar underlines its weak bargaining power, which will remain that way in 2016.

In the chart above, the Congress' share of seats in state assemblies is around 10-20% (except Chattisgarh). In 2015, the Congress won 27 of 313 seats–Bihar and Delhi combined–of states that went to election. Its vote share declined from 2013, and 2015 was no different.

AAP leader Arvind Kejriwal became the face of the opposition through his rhetoric against corruption in the run-up to the 2014 General Elections.

After winning 28 of 70 seats (seven seats short of a majority) in 2013 in the Delhi Assembly, the AAP increased its vote share in the Lok Sabha election but won no seat.

The AAP sprung back in 2015, winning 67 of 70 assembly seats in the national capital. The ouster of some leaders and backtracking on some issues hurt the image of the new and highly successful party in 2015.

The RJD won 80 seats in the 243-seat Bihar assembly to become the single largest party after a decade; it won only 22 seats in 2010.

That the people of Bihar voted for a party with a convict as leader underlines the popularity of Lalu Yadav--out on bail, as he serves a five-year term for corruption–the support for Nitish Kumar and the opposition to the BJP.

Bitter rivals Lalu Yadav and Nitish Kumar fought together to deny the BJP power. Anti-corruption crusader Kejriwal shared the stage with convict Lalu Prasad Yadav, inviting speculation of what might happen in 2016.