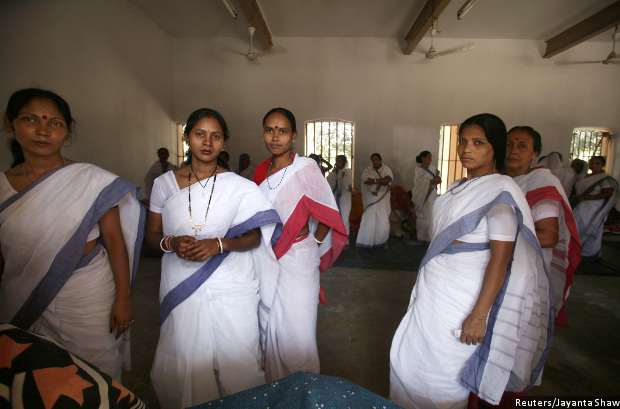 Women inmates watch visitors from their cell in a prison in Kolkata. The percentage of female inmates in Indian prisons has remained steady over a 30-year timeframe: 4% of total inmates, the same as in 1985.

As many as 17,681 women were in prisons at the end of 2014, according to data from the National Crime Records Bureau (NCRB).

The percentage of female inmates has remained steady over a 30-year timeframe: 4% of total inmates, the same as in 1985.

Women imprisoned increased by 4% over three years to 2014 compared to a 9% increase in the general prison population over the same period, when it increased from 385,000 inmates to 418,000, leading to overcrowded prisons, IndiaSpend reported in September 2016.

As many as 51 female prisoners died behind bars in 2014; 46 were natural deaths while two were suicides.

The highest number of deaths were in Uttar Pradesh (11, including two suicides), followed by Maharashtra (seven), and Punjab (five).

1,800 children growing up in prisons

Uttar Pradesh had the highest number of children growing up in prisons, 428, followed by West Bengal (298) and Bihar (166).

Letting a child grow up in prison is a controversial provision that has sparked debate: Children are allowed to live with their jailed mothers until the age of six in India.

Growing up in restricted spaces, children sometimes miss any sort of education and may not be able to recognise what is obvious to other children, such as the difference between an elephant, a needle and a tractor, BBC reported in November 2005.

The Supreme Court issued guidelines for basic rights to be observed in prisons lodging women with children in 2006. It stated that children should not be deemed as convicts and “should be provided with food, clothing, separate utensils, adequate sleeping facilities, and other necessary facilities”.