13% of samples in Tamil Nadu are testing positive, 4% in India

We analysed testing data released by 12 states individually--because the central government is not releasing state-wise data--and found that the percentage of tests coming out positive varies from 0.4% to 13% across states.

In general, states testing more are detecting more positive cases, though this could be because testing criteria are still restricted to symptomatic people with a history of international travel; healthcare workers; close contacts of infected patients; and those with severe acute respiratory illness (fever and cough and/or shortness of breath)--those more likely to be infected.

Tamil Nadu, which has the second highest number of cases in the country at 690, also has the highest percentage of positive samples among total samples tested. Chhattisgarh, which has tested 2,764 samples, got only 10 positives (0.4%). 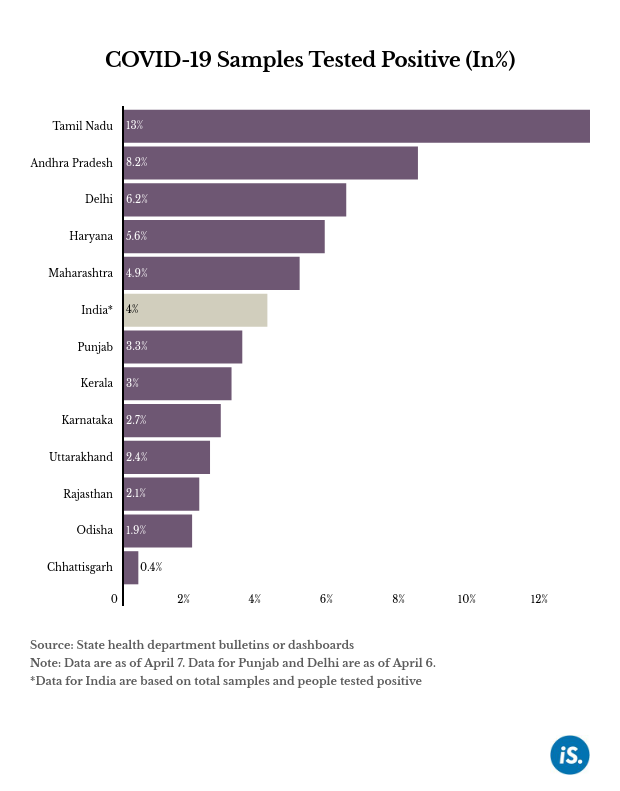 The last update from the Indian Council of Medical Research (ICMR), which announces testing data at daily briefings, said that 114,015 samples were tested and 4,616 people had tested positive, which is a rate of 4%. It does not provide state-wise figures, the cumulative numbers for the samples tested positive till date, or the number of repeat tests among the samples tested daily.

Data we gathered from states show that among states with high testing numbers, Kerala and Rajasthan have a positive rate of 3% and 2.1%, lower than the national rate.

Andhra Pradesh, Delhi and Tamil Nadu--which saw a spike in cases in April because of detection of cases related to the Tablighi Jamaat gathering in Delhi--have more positive samples among comparatively fewer samples tested.

For all the 12 states analysed, the sum of confirmed cases, negative tests and tests for which results were awaited matches the total samples tested.

65 private labs have been designated to conduct tests for COVID-19--Maharashtra has the most (14), followed by Telangana (10) and Tamil Nadu (9), per an April 7 press release from ICMR. New testing labs have been approved for Delhi, Punjab & Maharashtra based on request from the state governments.