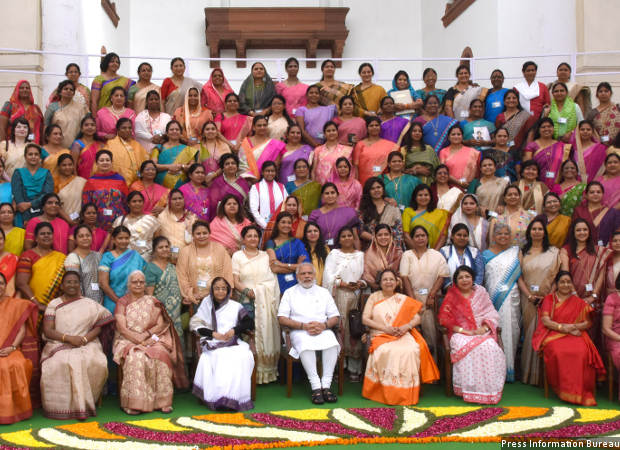 Prime Minister Narendra Modi in a group photograph at the valedictory session of the National Conference of Women Legislators, at the Central Hall of Parliament, in New Delhi on March 06, 2016.

From 5% in 1951, women Members of Parliament (MPs) today constitute 12.2% of the Lok Sabha (the lower house of Parliament), according to Factly.in, a data-journalism portal.

The rise in numbers has been steady through the years, both in absolute numbers and percentages.

The first Lok Sabha in 1951 had 22 women MPs. The current Lok Sabha has 66. Over 54 years and 16 Lok Sabha elections, this is a three-fold increase in the number of women MPs in the Lok Sabha.

The issue of women’s representation in elected bodies came to the forefront last year when the cabinet of Aam Aadmi Party (AAP) government in Delhi had no women, reviving the debate over constitutional and legal safeguards for them. The third-tier of elected bodies, the panchayats (village councils), now mandate 33% reservation for women.

Apart from the fact that half the population is systemically excluded from political participation, representation and decision-making, what do the numbers tell us about female representation in Lok Sabha over the years?

Female representation in state assemblies only 9%

The current average representation of women MPs (12.15%) is higher than the national average of women representatives in state assemblies, which is 9%.

While the numbers have increased over the years, the percentage of women that make up the Lok Sabha even today is not a figure to be proud of, especially when the ideal number should be at least 33%.

Women do want to enter politics; 15-fold rise in contestants over 59 years

Central to the question of women’s representation in Lok Sabha is the appetite for women to enter politics.

While the popular perception might be that few women are willing to or have taken the political plunge, the data indicate otherwise.

Women are more successful than men in politics

The success rate of women--winners vis-à-vis contestants--has consistently been higher than men over the years, in every election. In 1971, the success rate for men was 18%, half that of women (34%).

In the current Lok Sabha, the success rate was 6.4% for men and 9.3% for women. This could mean one of two things: Either women had a greater chance of winning or that tickets were being given to women who were more likely to win.

While the data point towards a broad but important trend, slicing the data further to constituency level could establish causal relationships.

What is the percentage of successful women who come from political families with already nurtured constituencies as opposed to self-made female politicians?

Either way, women are clearly more eager to enter politics, and have been more successful than ever. With the rise of new parties that don’t rely on political patronage of families, money and muscle power, a greater number of women in politics can only be good for half the population.

Data compiled by Factly team from the statistical reports of the Election Commission of India.

(This story first appeared on Factly.in)