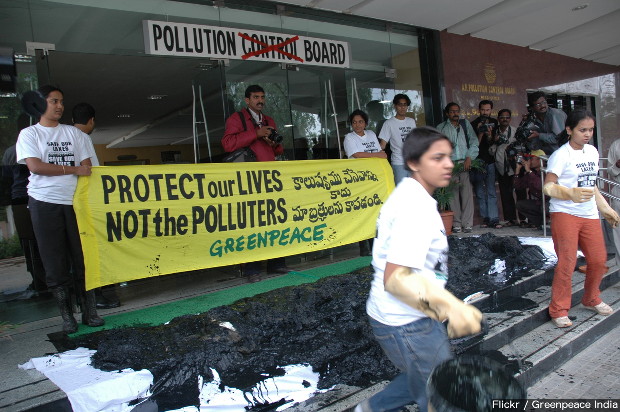 Greenpeace activists dump nearly a ton of toxic sludge from the Asanikunta Lake in Medak District, at the doorstep of the Andhra Pradesh Pollution Control Board in Hyderabad. GreenPeace was one of 10,000 non-government organisations whose registration under the Foreign Contributions Regulation Act registration was cancelled by Prime Minister Narendra Modi's government.

Delhi, Tamil Nadu, Andhra Pradesh (unified), Karnataka and Kerala together got 65% of foreign aid coming to India, the data, tabled in the Lok Sabha (lower house of Parliament) on July 26, 2016, revealed.

Organisations in Delhi received Rs 10,500 crore ($ 1.6 billion), while each of the five states—Tamil Nadu, Andhra Pradesh, Karnataka, Kerala and Maharashtra—received close to Rs 5,000 crore ($770 million) over the past four years. 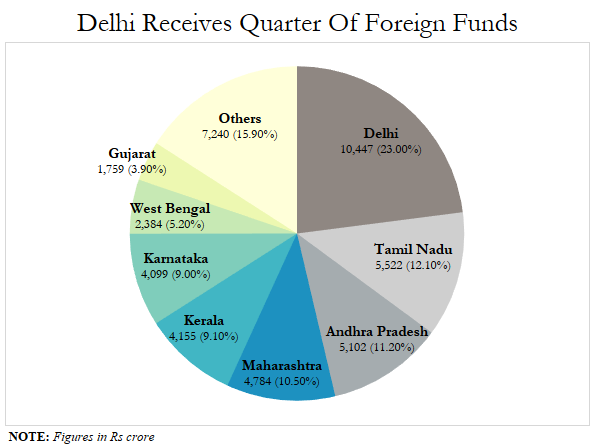 There are 33,091 NGOs registered to receive foreign funds—under the Foreign Contributions (Regulation) Act (FCRA)—after the registrations of 10,000 NGOs were cancelled by the Ministry of Home Affairs in 2015.

Among the reasons for cancellation of NGO registrations: Not filing returns, misutilisation of funds and accepting funds for "prohibited activities", which include funding legal costs of bail, writ petitions of Indian NGOs and their activists, and undisclosed payment of salaries by foreign NGOs to foreign activists.

Note: For NGOs with contributions more than Rs one crore

Foreign funds to Indian NGOs from 165 countries, most for social sector

Health, education and child-welfare together received Rs 4,500 crore ($ 690 million) of the Rs 12,000 crore received in 2011-12, according to our analysis of the 2011-12 annual report of the Foreign Contributions (Regulation) Act, the latest available.

International NGOs free to fund in India but only to govt

As many as 109 international organisations, including various branches of the United Nations, World Bank, World Health Organisation, International Monetary Fund, World Trade Organisation and Asian Development Bank, are not treated as a foreign source while funding projects in India.

“The World Bank funding in 2013-14 was $5.2 billion (Rs 33000 crore).This funding goes to the government and not to any NGO,”, wrote Prof. Trilochan Sastry of Association for Democratic Reforms (ADR), an advocacy, in this blog post.

A writ petition has been filed in the Delhi High Court by ADR to constitute an independent body to administer enforcement of Foreign Contribution (Regulation) Act, 2010. The case is currently being heard.