Bengaluru: Internet shutdowns in India have grown exponentially--from three in 2012 to 106 in 2019--according to the internet shutdown tracker maintained by the Delhi-based Software Freedom Law Center (SFLC), a legal services organisation working to protect digital freedom.

On January 10, 2020, the Supreme Court (SC) criticised the government for not producing the orders based on which the internet was blocked in Kashmir on August 5, 2019. By mid-December 2019, the shutdown had already made the record for being the world’s longest internet shutdown in a democracy. It was partially restored only in mid-January.

The SC ruled that the government cannot suspend the internet for an indefinite period and asked the government to publish all orders of restrictions in the public domain.

While most shutdowns lasted from a few hours to three days, 41 have lasted for over 72 hours. A majority of the shutdowns--301 out of 381--were targeted at mobile internet services alone.

In 2019, India was one of the three most economically impacted nations after Iraq and Sudan, according to data released by the internet research firm Top10VPN. Internet shutdowns cost the Indian economy $1.3 billion and the global economy a total of $8 billion in the past year alone.

Since the shutdown in Kashmir, the team at SFLC has been fielding multiple calls from journalists seeking data every day. IndiaSpend spoke with Prasanth Sugathan, 45, who is the volunteer legal director of SFLC. In a telephonic interview, Sugathan discussed digital freedom in India, trends in the internet shutdowns and the legal recourse available.

The SC’s judgement asking the orders for internet shutdowns to be placed in the public domain is a positive move that would allow parties to challenge their validity in the orders, Sugathan said.

Edited excerpts from the interview:

What are the areas SFLC works in?

The main area is policy intervention. When the government comes up with new laws and policies which could have an adverse impact on free speech rights, privacy rights etc., we write to them and make the policymakers aware of the various issues involved.

We also work closely with other organisations in this space because most of these issues are common--whether it is free-speech rights or privacy rights.

Why did you feel the need for an entity like SFLC in India?

Initially, when we started [in 2010], the idea was to provide support to the open source software community. Since that community was growing in India, there was a lot of confusion about licensing of software. Then, we realised that for that community to exist freely, we need to have an open internet, and that is how we started working in this area which is specifically speech rights and privacy rights. 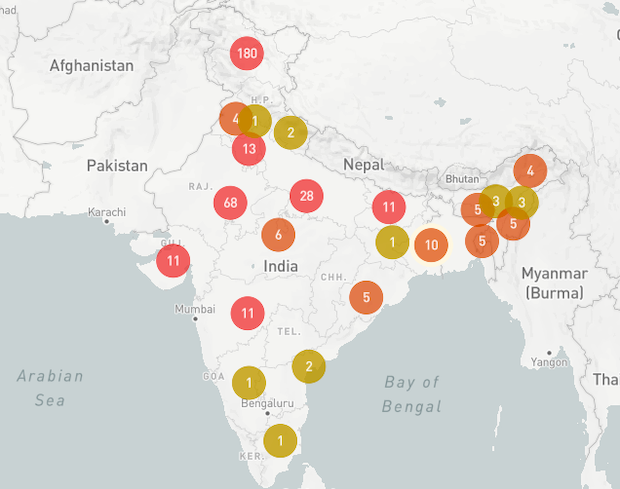 Could you give an example of any of the cases you helped successfully defend?

There was a recent case filed by a student in Kerala High Court (HC). She was expelled from her hostel because she protested against the rules which did not allow the use of mobile phones and the internet.

This was a landmark judgement where the Kerala HC has said that the right to access the internet is considered a part of fundamental rights along with the right to education and the right to privacy. That is an important judgement not just in terms of the students’ rights but also with respect to what we are seeing in terms of internet shutdowns, etc.

The SC, hearing the case of internet shutdown in Kashmir, has said the right to access the internet is a part of freedom of expression. We have seen a continual rise in internet shutdowns in India. Legally, has anything changed to make it easier for governments to do so?

There has not been much of a change. The only change is that, in 2017, new rules were introduced [Amending the Telegraph Act]. Earlier, internet shutdowns were invoked under Section 144 of the CrPC (Law of Sedition). The new rules under the Telegraph Act provided for temporary suspension of telecom services [by central or state government]. When the news came out, we thought there would be fewer shutdowns, now that there is a procedure or some safeguard in place.

The shutdowns have increased over a period of time and the number has not gone down after 2017 [Refer to the chart above].

Duration Of internet Shutdowns In India 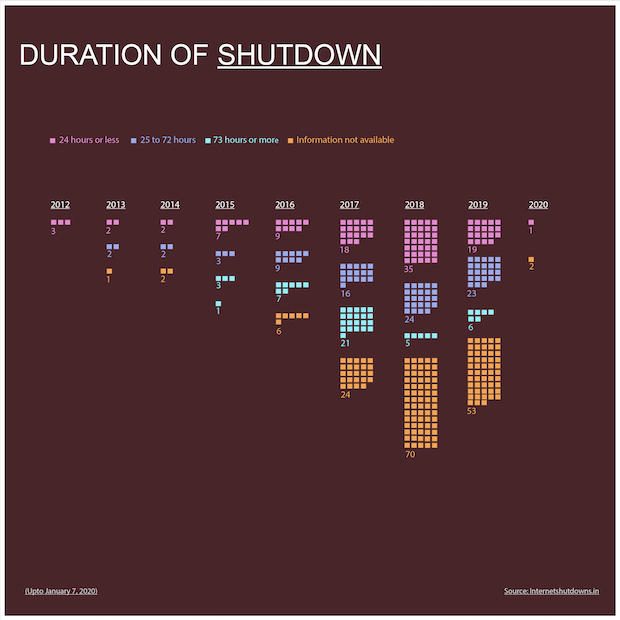 The lack of information is chiefly because no public notifications are issued by the government or internet service providers before, during or after shutdowns, leaving stakeholders outside the affected areas to source this information from available news reports, which do not consistently mention the duration of the shutdown.
Source: https://internetshutdowns.in

Did you observe any trends in terms of the shutdowns since SFLC began tracking them?

We have seen shutdowns for the silliest of reasons such as cheating in examination. In fact, there is a case in Ethiopia where the internet was shutdown to prevent a leak in the examination. You can’t have that happening in a democracy like ours. That is a problematic situation.

I believe, at least with the order that we have from the SC, that the number of shutdowns will go down. The SC has said that there should be a periodic review [of the shutdown] and they have also focused on the issue of proportionality, that there should be a proportionality test. So, I think that leads to some reduction in the number of shutdowns.

How do you verify an internet shutdown before updating the data on your website?

Initially, the main source of information was newspaper reports. Now, we also get a lot of reports from people who are affected. We have a button on our website where people can report a shutdown.

We also try to verify that with our own sources. This works on multiple levels. Any report that we put up on our website is done so only after verification.

Is there anything people can do legally to hold the governments accountable in case of a shutdown?

The only instance we have of the court directing the restoration of the internet is the Guwahati HC order recently. The HC of Assam said that you cannot suspend the internet.

We had filed a case in the Delhi HC but that was dismissed because the shutdown was already over. We had asked for a direction that arbitrary shutdowns may not be ordered, and challenged that it [the Delhi shutdown order] was not issued by the cognisant authority.

The rules provide that the order be issued by a person at the secretary level--either by the secretary in the home affairs at the Centre or a secretary in the home department at the state. [In the case of Delhi], this was done by the deputy commissioner of the Delhi police. He was not authorised to do that. But the court said since the shutdown was already over we don’t want to get into those details. 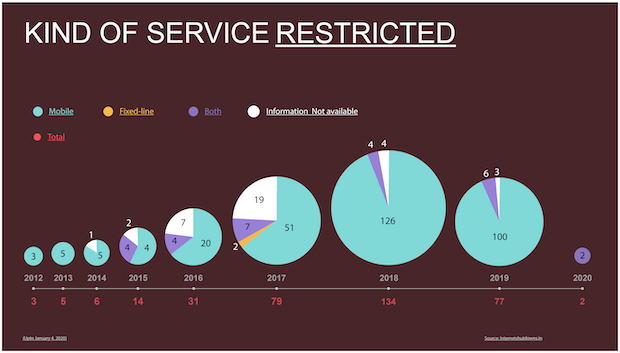 What are the challenges in questioning the shutdowns legally?

We have been filing applications under the Right to Information (RTI) Act to get copies of these orders. In most cases, these orders are denied, often citing security and other reasons.

We have asked questions whether reviews have been conducted--which is a mandatory aspect of the rule. This has been the bigger problem because there is no information about when shutdowns were ordered or when these were rolled back. Nothing is in the public domain.

Even if you have to approach a court of law, you should have access to the order. A person can then approach the court on the ground that the order is arbitrary and has to be struck down.

The best thing about the recent judgment [in the Kashmir petition] is there are specific directions to make all those orders public. That will go a long way in ensuring that the number of shutdowns comes down. Another advantage is that it becomes all the more easy for people to approach the court. When there is a chance of judicial review of the order, I feel that the government will also be more careful with coming up with an order which is arbitrary and unlawful. Currently, they are shielded by the lack of transparency.

What next for SFLC?

We feel that the right to access [the internet] is a fundamental right and that there is no reason for shutdowns in the country or any part of the world. We need to look at solutions even for the government. When there is a law and order situation, they won’t look at the internet as a medium by which riots are caused. That’s not true.

If you look at what happened during the London riots or the Christchurch bombing, in none of these places was the internet shut down. The ideal way for the government to handle a situation is to ensure that a proper channel of communication is open. Don’t just shut down the internet.

There is a lot of responsibility on all of us--academicians, civil society organisations--to ensure that the internet remains open and everyone can get access to it.

(Shetty is a reporting fellow at IndiaSpend.)