1 In Every 3 Children In Mumbai Municipal Schools Malnourished, Up 4 Times Since 2013-14 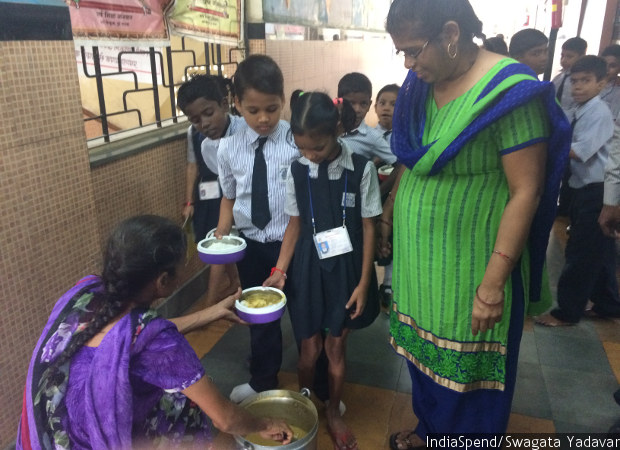 Despite an extensive mid-day meal programme, a third of children in schools run by India’s richest municipal corporation in India’s richest city, are malnourished, according to a new report that quotes the corporation’s own data, obtained through a right-to-information request.

Malnutrition has increased more than four times in Mumbai, from 8% in 2013-14 to 34% in 2015-16, according to the report released on May 30, 2017, by Praja Foundation, a nonprofit focussed on governance, even as the city leaves a rising proportion of its mid-day meal budget unused.

“We cannot compare Mumbai to Shanghai if many wards in Mumbai have malnutrition rates worse than sub-saharan Africa,” said Nitai Mehta, Founder and Managing Trustee of the Praja Foundation.

Malnutrition and diet are now the largest risk factors globally for disease and represent losses upto 10% in gross domestic product (GDP), greater than the loss sustained during the 2008-10 global financial crisis, according to the 2016 Global Nutrition Report.

Up to 36% (383,485 ) of more than 1 million children in Mumbai are enrolled in government schools, according to 2015-16 District Information System for Education (DISE) and BMC figures.

Source: Status of Malnutrition in Municipal Schools in Mumbai

Students were malnourished even though 83% and 95.1% of government and aided schools in Mumbai city and its suburbs, respectively, had a mid-day meal programme, according to the DISE.

“This raises serious questions on the efficacy of the ICDS (Integrated Child Development Services) and other schemes aimed at improving the nutrition of children,” said Milind Mhaske, Project Coordinator, Praja Foundation. “If children are malnourished in their early years of schooling, then it means that the gap in the schemes need to be identified.”

The highest proportion of malnourished children in 2015-16 among municipal schools was found in grade I—42% for boys and 43% for girls. Most join schools from anganwadis (courtyard shelters or creches), run under the ICDS, which is one of the world’s largest child-health programmes.

In 2015-16, 25.5% of children under the age of five years were stunted (less height for age) and 25.8% were wasted (less weight for height) in Mumbai City and 21.3% were stunted and 20.3% wasted in the Mumbai Suburban District, according to the latest health data available from the National Family Health Survey, 2015-16. The BMC malnourishment data reveal that the health of students does not improve as they grow up.

As diarrhoea rises, so does malnutrition

The rise of malnutrition among students at BMC schools is correlated with a rise in diarrhoea cases reported to Mumbai’s health system, said the authors of the Praja Foundation study.

An estimated 73% of malnourished children in 2015-16 studied between grades I to V, higher than lower in grades.

Mankhurd and Govandi, areas with most malnourished school children

The poor, eastern suburbs of Mankhurd and Govandi--areas packed with slums--reported the highest number (15,038) of malnourished children in 2015-16. Together, these areas comprise what is called the M/E ward, which has Mumbai’s lowest human development index (0.05), according to the 2009 Mumbai Human Development Report.

Despite the growing malnutrition rates among its children, there does not appear to be a shortage of money to address the problem.

Source: Status of Malnutrition in Municipal Schools in Mumbai