1.12bn Indians Have Aadhaar Numbers--How The Govt Plans To Sign Up The Rest 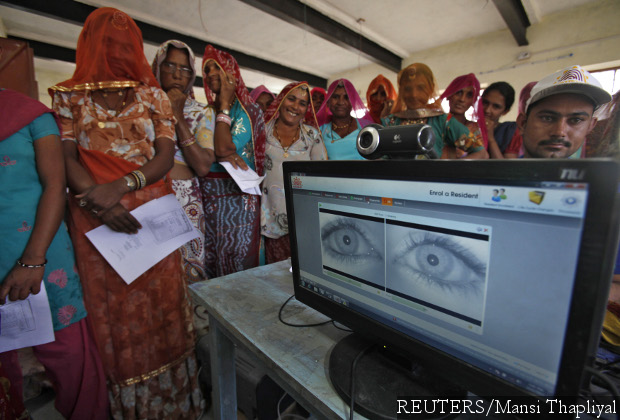 Village women stand in a queue to get themselves enrolled for the Unique Identification (UID) database system at Merta district in the desert Indian state of Rajasthan February 22, 2013.

More than 1.12 billion Indians--88.2% of the population--have now been enrolled for Aadhaar, India’s controversial biometric national identity programme. An IndiaSpend analysis of a government law that came into effect without much public attention six months ago reveals how the government plans to sign up the remainder of the population.

A 2 November 2016 circular from the cabinet secretariat used two sections of the Aadhaar (Targeted Delivery of Financial and Other Subsidies, Benefits and Services) Act of 2016 to make it mandatory for citizens to provide an Aadhaar number to benefit from schemes and services paid for from the Consolidated Fund of India.

This fund, the most important of all government accounts, receives all government revenues and is the source of most government spending nationwide, by central as well as state governments. The new Aadhaar law thus brings almost every government expenditure under the Aadhaar ambit.

This comes despite a 2015 Supreme Court (SC) interim order that held Aadhaar enrollment voluntary, and in the face of strident civil society opposition over privacy and security concerns that personal information obtained under the programme could be misused, and that already-deprived sections of the population without access to Aadhaar enrollment may be further marginalized.

The 12-digit, biometric Aadhaar unique identification (UID) number, meant to be a voluntary enrollment, will soon be compulsory to receive benefits under 530 welfare schemes and to perform a host of activities including filing income-tax returns, receiving college degrees and obtaining driver’s licenses.

What The New Law Says
Section 7

Section 7 of the Aadhaar Act, described as a “condition precedent” in the 2 November circular, allows central or state governments to ask those receiving “a benefit, subsidy or service” from the Consolidated Fund of India to furnish an Aadhaar UID as proof of identity.

Section 57 says “nothing contained in the Act” can prevent the use of Aadhaar for establishing an individual’s identity “for any purpose, whether by the State or any body corporate or person, pursuant to any law, for the time being in force, or any contract to this effect.” This allows for Aadhaar to be used as a primary identifier, although the agencies involved must conform to data protection and privacy provisions contained in the law.

The 2 November 2016 circular directed all secretaries to the Government of India to ask central ministries and state governments to “expeditiously” identify schemes that can use Aadhaar as “primary identification.”

It offered detailed instructions on how to ensure these moves would stick: “In order to do so legally, the ministry/department or other agencies in their jurisdiction should amend their own rules, issue circulars, orders or guidelines under their laws thereby prescribing use of Aadhaar under Section 7 or 57 of the Aadhaar Act, as the case may be.”

This contradicts the SC’s 27 March 2017 order that the government can demand enrollment with Aadhaar for accessing general public services, but cannot make it compulsory for claiming benefits under social welfare programmes. “For benefits, it [Aadhaar] cannot be pressed…for non-benefits, it can be done,” Chief Justice of India J.S. Khehar said, reiterating the apex court’s previous orders that had said Aadhaar would not be mandatory for obtaining benefits otherwise due to citizens.

Although the Unique Identification Authority of India (UIDAI), the statutory body collecting Aadhaar data and issuing UID numbers, claims Aadhaar is a voluntary identification option, the programme’s mission statement says Aadhaar is expected to form “the basic, universal identity infrastructure” for “registrars, government and other service providers across the country.”

As of 15 March 2017, 1.12 billion Aadhaar numbers have been assigned to 88.2% of the Indian population, according to this UIDAI report. The UID is envisaged as an easily verifiable number unique to each Indian citizen, which will carry biometric and demographic information while eliminating duplication and fake identities. Supporters of the programme rubbish privacy concerns, pointing out the number does not carry details on an individual’s religion, caste, tribe, ethnicity, language, records of entitlement, income or medical history--nothing beyond information contained in other proofs of identity, many of which are in the public domain. 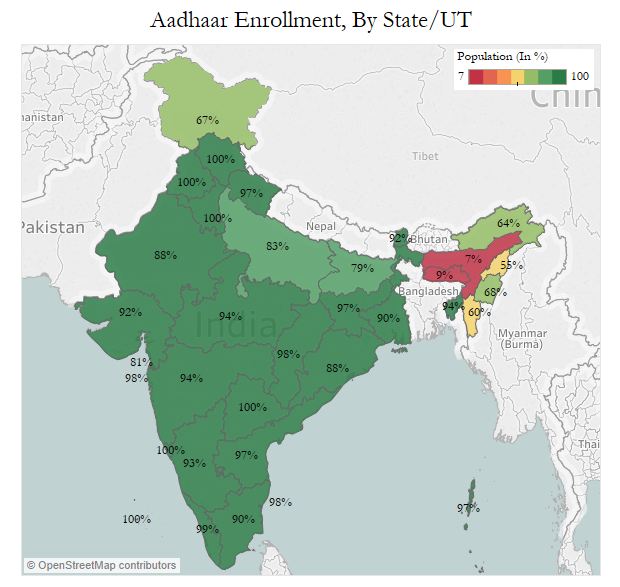 So far, 530 social welfare programmes from 63 ministries--of nearly 1,200 schemes from 75 ministries--are ready to be linked to Aadhaar, according to the government’s Direct Benefits Transfer (DBT) Mission website.

Started in 2013, DBT is a platform for the government to transfer subsidies and benefits from the Consolidated Fund of India directly into people’s bank accounts. The UID programme is expected to play a key role in this.

The DBT has already undertaken “an exhaustive exercise,” communicating with various ministries and departments to identify “approximately 500 schemes” capable of notifying the use of Aadhaar--in consultation with UIDAI--under Section 7 of the Aadhaar Act, the cabinet secretariat said in its 2 November circular.

The applicable welfare schemes range from the Sarva Shiksha Abhiyan (“education for all programme”) to the Swadhar Greh scheme (for women in difficult circumstances) and the maternity benefit programme. They also include housing subsidies for a range of workers--beedi makers, limestone and dolomite workers, and those involved in mining iron, manganese and chrome ores.

For non-welfare schemes, apart from filing taxes, Aadhaar will soon be mandatory for, among others:

-- the department of telecom, which has moved to make Aadhaar-based e-KYC (know your customer) mandatory for mobile phone connections, Mint reported on March 25, 2017.

-- the University Grants Commission, which has made it mandatory for undergraduate and graduate students to enroll for Aadhaar if they are to receive their degrees, India Today reported on 23 March 2017.

-- the road transport ministry, which has revealed plans for making Aadhaar identification necessary for new licences and renewals, The Times of India reported on 26 March 2017.

The Act provides for Aadhaar to be the primary identification tool for services that do not use funds from the Consolidated Fund of India, “such as issue of SIM cards, KYC [know your customer identification] for opening bank accounts, pension accounts etc.,” the circular said.

Thus, while not declaring Aadhaar mandatory, these laws ensure individuals using government programmes and services provide Aadhaar as proof of identity or furnish an Aadhaar enrollment slip, or provide a temporary photo identification (such as a driver’s license or voter identity card) until they get an Aadhaar UID. If the individual has still not enrolled for the UID programme, the agency concerned may even become a UIDAI registrar to help them do so.

Regulation 12 empowers ministries and state governments or agencies (unspecified if these are public or private) to arrange for Aadhaar enrollment facilities at “convenient locations” or become UIDAI registrars themselves.

Is the new law in violation of the Supreme Court order?

Amid controversy and in seeming violation of a 2015 Supreme Court order, on 22 March 2017, the Lok Sabha passed the Finance Bill with 40 amendments. One of these includes a clause that makes it mandatory for Aadhaar to be linked to bank accounts and permanent account numbers (PAN) for filing taxes. The Bill also sets a deadline of 1 July 2017 after which unlinked PAN cards will be deemed invalid.

Introduced through the “money bill” route, a Finance Bill enables the government to pass a range of usually tax- and finance-related bills and amendments without much opposition as the Rajya Sabha, in which the ruling BJP does not have adequate strength, cannot debate money bills. The 2017 Finance Bill, however, contains numerous amendments to non-tax and -finance legislation, such as the Aadhaar-related provisions, which has made it highly controversial. The Aadhaar (Targeted Delivery of Financial and Other Subsidies, Benefits and Services) Bill of 2016 had also been passed in Parliament through the money bill route.

The Aadhaar-related aspects of the 2017 Finance Bill, particularly, have sparked controversy because they conflict with an August 2015 SC order, in which the court had stated: “The production of an Aadhaar card will not be condition for obtaining any benefits otherwise due to a citizen.” The court had specified that the government may not use Aadhaar for “any purpose other than” the Public Distribution Scheme and the LPG Distribution Scheme, and that the information obtained about an individual “shall not be used for any other purpose except as may be directed by a Court for the purpose of criminal investigation.”

In October 2015 the court had modified this order to allow Aadhaar to be used for the following schemes too: the Mahatma Gandhi National Rural Employment Guarantee Scheme (MGNREGS), the National Social Assistance Programme (Old Age Pensions, Widow Pensions, Disability Pensions), the Prime Minister's Jan Dhan Yojana and the Employees' Provident Fund Organisation. Nevertheless, the SC had maintained that Aadhaar is “purely voluntary” and it could not be made mandatory “till the matter is finally decided by this Court one way or the other.”

Yet, in January 2017, the government made Aadhaar enrollment mandatory for beneficiaries of the Employees’ Pension Scheme and MGNREGS, having enacted a new Aadhaar law four months earlier to preempt a legal challenge. Since then, it has made a growing number of services provided by government agencies and private enterprises conditional on providing one’s Aadhaar number.

On 27 March 2017, following the controversy over the Finance Bill, the SC turned down a plea seeking an urgent hearing of the Aadhaar case. The court reiterated, however, that the UID can be “pressed” for all “non-benefit” plans where questions of entitlement do not occur.

The November 2016 cabinet circular and the accompanying UIDAI guidelines for “notifying the use of Aadhaar” show the government’s resolve to use Aadhaar as the “primary identifier” for all schemes and services. The document also includes a circular from the Ministry of Petroleum and Natural Gas for “ready-reference.”

Describing it as the the most widely held identity document in the country that is also the “only identity which is authenticable online from practically anywhere, anytime,” the UIDAI guidelines said Aadhaar can now be used “not only as one of the official valid documents for KYC and other identification purposes, but also as a condition precedent and primary identification for the delivery of various services, benefits, or subsidies.”

Condition precedent, a term used mostly in contractual law, refers to an implied stipulation in a contract that one contracting party must perform on its part before it can demand performance from the other. In other words, the circular implied that citizens must enroll for Aadhaar as identity proof to be able to avail of services or benefits.

However, the circular says such subsidies and benefits should not be denied to anyone who does not have an Aadhaar number; such persons can provide temporary enrollment details of Aadhaar, or an alternative photo identity card, bank passbook, etc. until an Aadhaar number is obtained.

In a subsequent cabinet secretariat meeting on 24 November 2016 to discuss notifying Aadhaar for various schemes, the legal affairs department of the law ministry “advised” those present that the Aadhaar Act does not “necessarily mandate” issuing a notification for using Aadhaar as a primary identifier. However, UIDAI chief executive officer, Ajay Bhushan Pandey reiterated the programme’s guidelines, adding that the UIDAI will take responsibility for getting the draft notification vetted by the law ministry, the minutes of the meeting show.