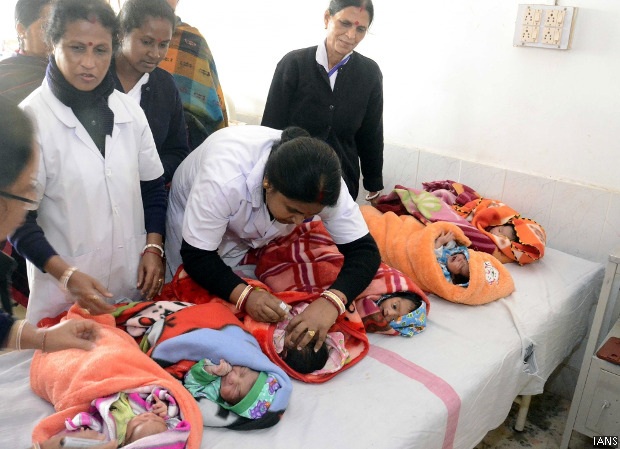 A nurse administers polio drops to new born babies in a Dharmanagar hospital of Tripura on Jan 17, 2016.

Among larger Indian states, Gujarat has the least number of vaccinated children: 50.4%, as of 2015-16 data. The immunisation rate of India’s fourth richest state (as of 2013-14 constant prices) is now worse than that of some of its most backward states -- Bihar, Madhya Pradesh, Rajasthan and Uttar Pradesh (UP), clubbed together as BIMARU (‘sick’ in Hindi).

While Gujarat’s current immunisation rate is up 11.5% from the previous decade, it is now 11.6 percentage points below the national average of 62%, according to an IndiaSpend analysis of National Family Health Survey (NFHS) data from 1991 to 2015-16.

Till recently, the BIMARU states, along with Arunachal Pradesh, Nagaland, Assam and Meghalaya, held the worst child vaccination records in the country.

Across India, the percentage of children who have received full immunisation that includes polio, BCG, DPT, and measles vaccines, has dramatically risen over 40% in the last 10 years -- from the 43.5% reported during the NFHS round three in 2005-06 to 62% in the fourth round.

The percentage of children immunised in Madhya Pradesh comparatively grew at a slower pace of 33% in the same period.

Other rich states that show a slump -- Tamil Nadu, Maharashtra and Uttarakhand

Among Indian states, Punjab, Goa, and West Bengal recorded the highest numbers in immunisation of children between the ages of between 12 and 23 months.

Meanwhile, Gujarat aside, growth of immunisation coverage in the large prosperous states of Maharashtra and Tamil Nadu has also particularly slumped. 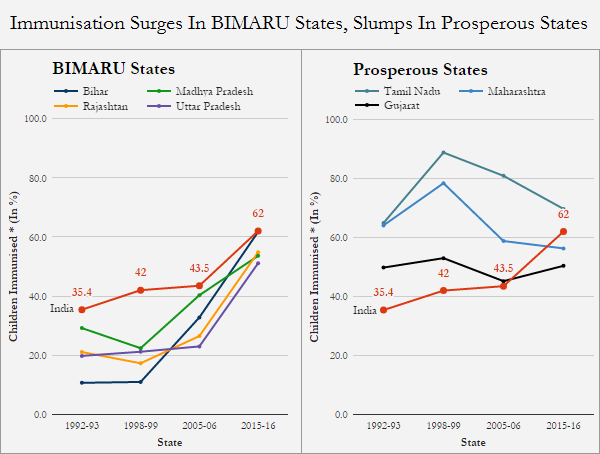 Maharashtra, India’s richest state, recorded a decline of 4.3% in the number of children vaccinated in 2015-16 over 2005-06. It now fares worse than Bihar which has witnessed an 88.1% growth in the same period.

Uttarakhand too, carved out of UP in 2000, saw a 3.8% drop in percentage of children immunised from 60% a decade ago. The young state, has been otherwise recording significant growth in its state gross domestic product, per capita income, poverty reduction, and literacy and performing better than its parent state, as IndiaSpend previously reported in February, 2017.

Himachal Pradesh too witnessed a 6.3% decline in immunisation coverage.

While much of India’s north-east showed low immunisation of children in the latest survey -- with Nagaland recording the lowest percentage -- five of seven states in this region still showed significant improvement since 2005-06. From 33% a decade ago, Meghalaya recorded a notable growth of 87% in vaccination coverage. The percentage of children receiving full immunisation grew 70% in Nagaland, and 50% in Assam. 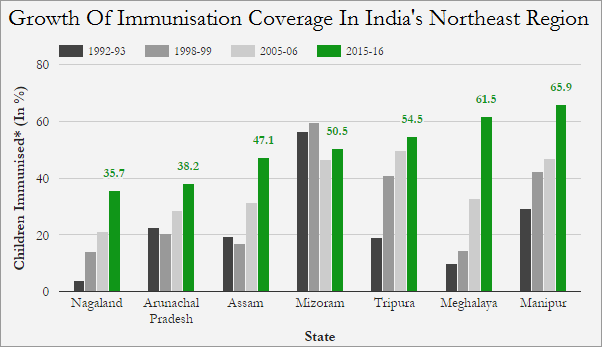 In December 2014, Mission Indradhanush (Indra’s Bow) -- now in its second phase -- was launched with the goal of increasing immunisation by 5% every year. This would ensure that 90% of children are immunised by 2020.

During the first phase of the mission, the government identified 201 “high-focus” districts accounting for nearly 50%ph of all unvaccinated or partially vaccinated children in the country, according to this 2015 press release from the ministry of health and family welfare ministry.

Of these, 82 districts were located in the BIMARU states alone -- 14 in Bihar, 15 in Madhya Pradesh, nine in Rajasthan and 44 in Uttar Pradesh --where 25% of the unvaccinated or partially vaccinated children reside.

The increased focus on these states may thus be credited with the significant progress in immunisation efforts here. The shift in focus from the more prosperous states may have also contributed to their slow growth in vaccination coverage.

Reasons for low immunisation: lack of awareness, conviction and time

There are several reasons for partial or no immunisation across India but the most common ones are: not convinced about the need (28%) and lack of awareness (26%), according to this Mission Indradhanush factsheet.

This was also reflected in the findings from Gujarat, where not feeling the need for vaccines (22.3%) and not knowing about the vaccines (15.5%) were the primary two reasons for low immunisation. A sizeable 10.2% attributed this to “wrong advice from someone” while 8.1% felt the “time (for administering shots) was not convenient”.

In Maharashtra, time inconvenience (15.2%) and not knowing where immunisation shots are being administered (9.6%) were cited as major reasons for low vaccination coverage apart from the other primary reasons.

In the north-eastern states where vaccination coverage is particularly low, a median 44.9% did not feel the need to vaccinate their children.

doses at different times. Possible reasons for Gujarat’s poor performance in immunising its population could be that its health institutions, clinics and nurses who provide regular check-ups and care are less efficient and capable than in many other states, according to this 2015 report in The Economist.

“Short campaigns to roll out one-off vaccinations are one thing, but sustained investment in health is required to achieve long-term improvements in full immunisation,” the report said.