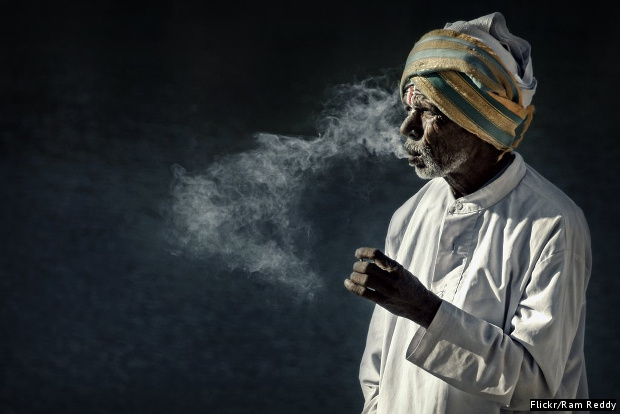 In January this year, the government asked for public opinion on tougher new laws to curb smoking: To raise the minimum smoking age to 21 from 18, and to ban the sale of single cigarettes, which account for 70% of nationwide cigarette sales.

People responded enthusiastically; 45,000 emails and 100,000 letters poured in to the health ministry, as Reuters reported earlier this month. What they said, however, is not known because the government hasn’t yet read the messages, according to a health ministry representative quoted in the story.

Like those messages, the World Health Organisation’s Report on the Global Tobacco Epidemic 2015 is largely ignored in India. Its single-line message: Raising tobacco taxes can help curb smoking.

Curbing smoking is very important to India for two reasons:

Indians aged 35 to 69 spent Rs 104,500 crore ($15.9 billion) in 2011 on diseases associated with tobacco--including cancer, respiratory diseases, tuberculosis and cardiovascular diseases. This figure is almost six times as much as central-excise tax collections from all tobacco products that year, according to the Government of India, WHO and the Public Health Foundation of India.

To put the health cost of tobacco in further perspective, it exceeded the combined annual state and central government expenditure on health care by 12% in 2011.

Taxes on cigarettes rise--not enough--but they do. Bidis are the problem

A 10% price increase on tobacco products could cut consumption between 2% and 8% in developing nations, according to the WHO. Tax hikes increase prices, which in turn lower demand and protect people from the ill effects of tobacco.

“Raising taxes is a win-win situation," said Arun Thapa, Acting WHO Representative to India. It’s good for human health and for the country’s fiscal health.”

Over the last 19 years, taxes on cigarettes in India have risen 1606%. As the next part of this series will tell you, that isn’t quite enough, and the six-tier tax structure is so complex--based on stick lengths and filters--that companies manipulate it with relative ease to keep demand intact.

The biggest problem in curbing tobacco use lies with the influence wielded by those who make the humbler--but more damaging--cousin of cigarettes, the bidi.

Taxes on a pack of bidis are 7% of the retail price, less than a tenth of the WHO’s suggested level of 75%. A 20-stick pack of best-selling cigarettes is taxed around 60% of retail price.

Bidi smokers make up 61% of the nation’s 120 million smokers, according to the Global Adult Tobacco Survey (GATS) 2010. This is a conservative estimate. Some studies peg the numbers of bidi smokers higher, at 73%, even 85%.

But the bidi industry has consistently squeezed concessions from the government.

Million of jobs and livelihoods at stake, so taxes must stay low, argue bidi barons

Here are some concessions the government gives the bidi industry:

Some eight million people work as bidi rollers nationwide, said a representative of the All India Bidi Industry Federation.

“Imposing taxes on bidis and introducing pictorial warnings on bidi packs would lower demand,” said Sudhir Sable, secretary, All India Bidi Industry Federation. “Any fall in production would jeopardise the jobs of bidi rollers. It would also adversely impact tobacco farmers, as well as the thousands of corner shops selling the product.”

Increasing taxes on bidi would invariably increase the illicit trade in bidis, leading to the proliferation of fake bidis, Sable argued. It would also deprive states and the central government of tax revenue.

These arguments do not wash, say experts.

In 2013, the bidi industry contributed less than 3% to the government’s central excise collection from tobacco products, not surprising, given the low excise duty it pays.

A Public Health Foundation of India study says there is indeed scope for taxes on bidis to be increased.

Essentially, the argument goes, higher tax rates would offset any loss of excise from fall in consumption. In the bargain, spending on “useful” goods and services will grow.

“Money not spent on bidis or cigarettes will not disappear from the economy,” said Prabhat Jha, founding director of the Centre for Global Health Research, University of Toronto. “It will be spent on other products which generate employment.”

Additional revenue could help the government meet the cost of transitioning bidi workers to other means of employment. The government has previously considered a cess on cigarettes to encourage farmers to switch from tobacco to other crops.

So, why not tax all segments of the tobacco-products industry, experts suggest, to fund a gradual transition? Bidi workers, among some of India’s most disadvantaged people, can only benefit.

“The effect (of high taxes and low consumption) on bidi employment will take years,” said the University of Toronto’s Jha. “It does not mean current bidi rollers will lose their jobs. It means fewer people will take low paying bidi rolling jobs in the future.”

West Bengal, Maharashtra, Andhra Pradesh and Karnataka are among India’s top bidi-producing states. In West Bengal’s district Murshidabad, bidi rolling is pretty much the only livelihood.

“They earn minimum wages or ‘negotiated’ wages,” said Sable. ‘Negotiated’ means a lower wage than the minimum government-prescribed wage, for which Sable said the consent of the local government authority is always taken.

“Lower wages are negotiated because the cost of the bidi has to be kept low for the consumer and also ensure parity with wages in neighbouring states,” said Sable.

Collusion between local government authorities and the bidi industry--as Sable admits to--keeps bidi workers in penury, while tying their daily wage to punishing targets of about 1,000 bidis a day causes ill health, write Sunanda Sen and Byasdeb Dasgupta in their book “Unfreedom and Waged Work: Labour in India’s Manufacturing Industry.”

Most workers are given tobacco to roll at home. Protective measures such as masks and gloves are unheard of, and soon enough, they suffer the ill effects of exposure to tobacco flakes and dust.

“Ear, throat and lower respiratory tract infections are common among bidi workers,” said Arora. “So are cancer and tuberculosis.”

Bidi workers and rollers exposed to tobacco dust had a six-fold higher incidence of respiratory impairments, such as breathlessness and cough, reported a 2006 study in Murshidabad, West Bengal.

Many women workers suffer gynaecological problems and pregnancy complications. This should be a concern, as 90% of the workforce is female.

This is the first of a two-part series. Tomorrow: How India's Tax System Helps Cigarette Smoking Flourish.