States That Received Most Migrants Also Saw Most Road-Accidents Deaths

Mumbai: Of the several million migrant workers stranded across India during the world’s biggest lockdown, 2.6 million set out on foot, cycles, carts, motorbikes, trucks, buses and trains to return to their villages by any means possible, according to data from the central Chief Labour Commissioner’s Office. As many as 198 of these labourers died en route between March 25 and May 31, found a study by SaveLIFE Foundation, a Delhi-based non-profit working on road safety.

In all, 750 people died in 1,461 road accidents across India during the lockdown, the SaveLife Foundation study found, with Uttar Pradesh, Madhya Pradesh and Bihar accounting for 46% of these deaths. The study analysed 30 online and print media resources for data on road accidents and deaths due to road accidents to collate its data.

The maximum number of road crash deaths were reported in Uttar Pradesh (245), followed by Telangana and Madhya Pradesh (both 56), Bihar (43) and Punjab (38).

Of the 245 people killed in accidents in Uttar Pradesh, 94 were migrant labourers--the state accounts for 48% of migrant labourer deaths. Madhya Pradesh (38), Bihar (16), Telangana (11) and Maharashtra (9) are the other states with the highest number of migrant workers’ deaths in crashes, the study found.

“These states are home to most of India’s migrant labourers and witnessed a large-scale movement of migrants. It is no coincidence that these states are also the top four when it comes to migrant deaths,” said Piyush Tewari, founder of SaveLIFE Foundation.

Migrant labourers died while cycling and walking, on rickshaws and carts, in trucks and cars, and even while traveling in buses organised privately and by the state, the study noted.

Vehicle-on-vehicle collisions were responsible for 43% while over-speeding led to 15% of all road crash deaths. Collisions with roadside objects and pedestrians run over accounted for 9% each.

The highest number of deaths were reported during the fourth phase of the lockdown between May 18 and 31 when a large number of long-distance buses were pressed into service. 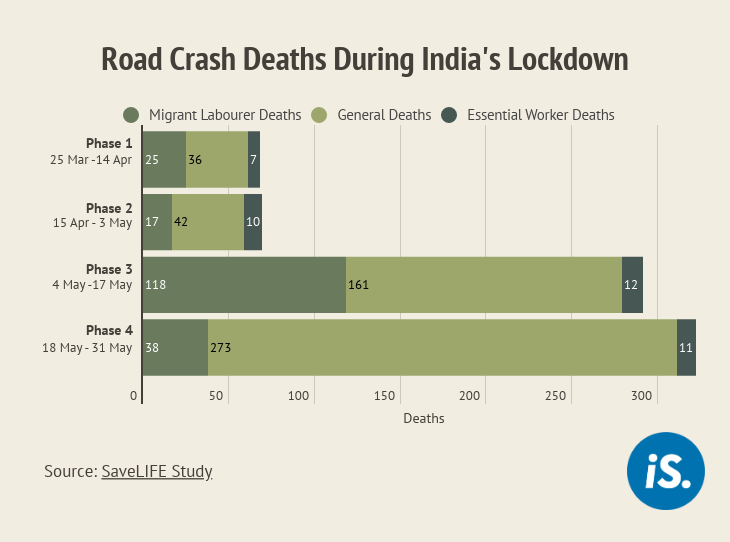 (Salve is an IndiaSpend contributor.)