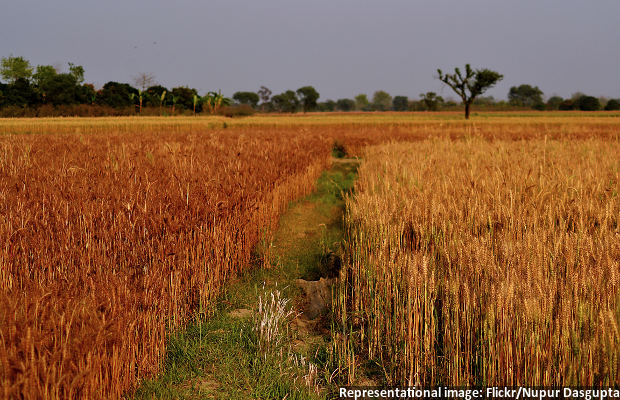 Successive generations of Indians have quibbled about the sliding quality of dana-pani (food-drink) and hawa-pani (air-water). Now, US-based scientists have proven that more carbon dioxide (CO2) in the atmosphere is indeed sapping the nutrient content of staple foods, leaving people less healthy. And they expect this situation to worsen.

Such high levels will strip wheat and rice of their protein, iron and zinc content, increasing the number of people at risk of micronutrient deficiencies, according to studies led by Samuel Myers, senior research scientist at the Harvard T.H. Chan School of Public Health, USA.

The 5.3% drop in the protein content of wheat and rice expected by 2050 will put 53.4 million additional Indians at risk of protein deficiency, according to Myers’ newest study published in August 2017 in the journal Environmental Research Letters.

In India and globally, poor people who rely on cereals for their protein intake will face the biggest risk. Roughly 60% of the protein content in the average Indian diet comes from cereals.

Protein is a macronutrient comprised of different amino acids; its deficiency causes a host of diseases already common in India, ranging from stunting in children to cardiovascular disease in adults.

Another new paper from Myers, published in GeoHealth, predicts that less iron in wheat and rice grown in in India—which modelling studies show will diminish by 4.8% by 2050—will exacerbate iron deficiency in Indian children aged 1 to 5 years and women of childbearing age (15 to 49 years).

Insufficient iron is the most common micronutrient deficiency in the world. Already, almost six in 10 Indians are anaemic, according to the World Health Organization. A similar number depend on wheat and rice for their iron intake.

Expected Fall In Nutrient Level By 2050

Number of Indians to be impacted

6 in 10 Indians anaemic, to worsen

Source: Studies of Samuel Myers, others

Globally, anthropogenic CO2 emissions are also expected to shave off 9.1% and 3.1% of the zinc content of wheat and rice, respectively. In India, this will put nearly 48 million more Indians at risk of zinc deficiency, Myers concluded in his 2015 study.

More than one-third of the Indian population is zinc-deprived; seven in 10 Indians rely on wheat and rice for their zinc intake.

To safeguard the millions of Indians who depend on wheat and rice for their micronutrient intake, India must, at the very least, “step up dietary surveillance efforts to identify sub-populations who are not meeting their nutritional needs, and address culturally appropriate interventions to ensuring nutritional adequacy”, Myers said.

Wheat and rice, classified as C3 grasses—C3 denotes the pathway the plant uses to capture CO2 for photosynthesis—are among the crops most sensitive to environmental CO2.

Higher heat from CO2 emissions-driven climate warming hastens wheat ageing or senescence, which can reduce the crop yield by up to 20%, as per a study led by Stanford University scientist David Lobell and published in the journal Nature Climate Change.

Myers admitted not knowing the reason why environmental CO2 zaps protein and other nutrients in plants: “All we know for certain is that since crop nutrients have a symbiotic association, such as zinc aids protein synthesis, a fall in any one nutrient impacts the bioavailability of another and so on.”

“Reducing CO2 emissions is the most basic thing we could do to address the problem,” said Myers. “Breeding crops that are less sensitive to the harmful effects of CO2 would help, and biofortification to produce crops that are richer in nutrients is also possible.”

Traditional grains that were a larger part of the Indian diet may be richer in nutrients and could be revived, Myers said.

Ragi (finger millet), bajra (pearl millet) and jowar (sorghum) are native to India and were widely consumed in the past.

In open field experiments at three locations spanning a decade, Myers found that sorghum displayed no effect when exposed to higher concentrations of CO2 even as C3 grasses, legumes and maize showed significant iron loss.

“Millets tend to be C4 grains, which use CO2 more efficiently than C3 grasses, making them less vulnerable to rising CO2,” Myers said, adding, “More diverse diets, less reliant on wheat and rice for key nutrients would be the best thing for India's population, particularly for the poor.”

For this, the focus of public health and agriculture policy-making must change, as must farmer education.

Cereal-based diets and cereal-focused food subsidy programmes offer low-quality protein, and the percentage of Indians at risk of quality protein deficiency is estimated to vary between 4% and 26% among different age groups and between the urban or rural areas.

By incorporating millets and other protein-rich foods such as pulses in the three main public food distribution programmes--the Public Distribution System (PDS) through which the government provides subsidy on 5 kg of cereal each month to millions of eligible persons; the Mid-Day Meal programme for primary and upper-primary students in government and government-supported schools; and the Integrated Child Development Services programme for improving nutrition among children up to six years of age--the government could enable more people to consume quality protein.

By creating steady demand, this would also give a fillip to farmers’ efforts to diversify towards millets and pulses.

Although the National Food Security Mission attempted to include millets in the PDS in 2014, apart from Karnataka and Andhra Pradesh, states are yet to comply with its directions, IndiaSpend reported in August 2016.

“The consumption of millets is lower down on the agenda of policy makers as well as the community,” Sheila Vir, founder director of the Public Health Nutrition and Development Centre, New Delhi, and a former consultant with UNICEF India, told IndiaSpend. “Wheat has become popular because it is easy to cook, it requires comparatively less time and energy. Now we possibly need campaigns to make millets popular again.”