Despite intense floods in some parts of India, the monsoon rainfall across India through August 10 is only 91% of average rainfall, a quarter of the country is now rain deficient, according to the latest meteorological data, and the monsoons should start withdrawing from northwest India this week.

The strongest El Nino-Southern Oscillation (ENSO)--a coupled ocean-atmosphere system in the Pacific Ocean that influences, among other weather events, the monsoons--in 17 years and human-induced global warming have significantly contributed to the severity of the recent weather. These include heat waves and floods, not just in India but its neighbourhood, according to scientists.

These events--recently, a typhoon last month in Taiwan and record high temperatures in Hong Kong--appear unconnected, but it appears increasingly apparent that weather systems over Asia are interlinked and feeling the effects of three phenomena: El Nino, global warming and local air pollution.

Heat waves occur over land and also over oceans, and typhoons are controlled by ocean temperatures. While El Nino triggers variations from year to year, global warming makes the consequences worse. This year, the planet has experienced the highest average temperatures in 136 years of record keeping.

“In general the climate is changing because of human influences changing the composition of the atmosphere and leading to global warming," said Kevin Trenberth, Distinguished Senior Scientist at Climate and Global Dynamics, National Center for Atmospheric Research, in the US city of Boulder. "The atmosphere is generally warmer and moister as a result.”

Interconnections are typified by the typhoon Soudelor, which slammed Taiwan on August 9 and swept into China as a tropical storm.

“Sometimes local heat can be intensified around the edges of a typhoon, where air is sinking in response to the rising air within the typhoon itself,” said Bob Henson, a meteorologist and blogger for Weather Underground and the author of The Thinking Person's Guide to Climate Change.

"This process taking place around the periphery of Typhoon Soudelor probably helped lead to the all-time record high observed in Hong Kong (37.7°C on August 9), as well as the sustained very hot temperatures in Japan,” said Henson.

All weather events, Trenberth observed, are “in the context of large natural variability (that) we call weather and climate variability.” These weather events would occur anyway because they are natural phenomena. With global warming, their effects and consequences are often worse: the heat is greater, the rains are heavier.

Already, it has been a very warm year for earth as a whole, said Henson. Global temperatures are at a record high for January through July for the planet (land and ocean), in records that go back more than a century, manifesting as heat waves.

As for the El Nino event currently underway, its scale is substantial and has led to a much warmer Pacific, resulting in more typhoons and related weather events. The Climate Prediction Center in Maryland, U.S reported in its update on August 31 that the sea surface temperature as measured by the Nino 3.4 index for the previous week was 2.2 degrees above average, reflecting the influence of El Niño. 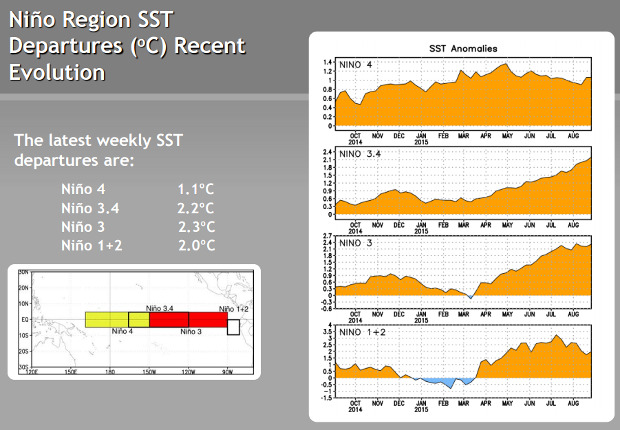 “El Nino has large-scale patterns associated with it, affecting all Pacific-rim countries always, but extending much farther for large events as we have now," said Trenberth. "It helps determine where the rains occur and where the droughts, heat waves and wild fires are more likely.”

Although typhoons, such as Soudelor, can develop from small atmospheric disturbances, they feed on the warm waters of the Pacific and the associated water vapour in the atmosphere.

"But not every typhoon will be wetter just because the overall climate is warming," said Henson. "It is critical to recognise that climate change does not cause a weather event like a typhoon. Instead, it changes the overall atmosphere in which these natural weather events take place.”

The changes in Asia's three monsoons

The monsoons are related to the build-up of heat in spring and early summer across Asia. As the hot air builds and rises, moist air sweeps in from the south to replace it at lower levels. This is why all of Asia's monsoons take place in the summertime so predictably.

Jayaraman also added that “there is some connection between rainfall in India and that in East China because they are a part of the giant Asian monsoon system.”

Precipitation falling in monsoon circulations around the world has been rising in recent decades, and it is expected to increase further in the decades to come, says Henson. This is largely because a warmer atmosphere allows more water vapour to evaporate from oceans, so there is more fuel for heavy rain.

IndiaSpend has previously reported how extreme rainfall events in central India, the core of the monsoon system, are increasing and moderate rainfall is decreasing—as a part of complex changes in local and world weather—according to a clutch of Indian and global studies reviewed.

However, not all locations will see more intense monsoons every year. Heating in one area can trigger downstream changes.

“Like a rock in a stream, there are waves that spread out," says Trenberth. "The heating is like the rock. The waves are the cyclone and anticyclones that then get preferentially stuck in one place. They are also greatly affected by the fact the Earth is rotating.”

Added to that is local pollution. Its immediate effect is to block the sun, leading to cooling, but it also leads to less heating of the surface and less evaporation. Sooty pollution--brown or black--also heats the area where it is above the ground, and that short-circuits the water cycle, so the rain is reduced in that area.