Update (June 5, 2020): The Lancet has retracted the paper that had said that hydroxychloroquine is harmful and not beneficial for COVID-19 patients, and the World Health Organization, which had paused its trial of this drug, has also resumed the trial. Read our blog on the update here.

New Delhi: The Indian government issued a revised advisory on May 22, 2020, expanding the use of the anti-malarial drug hydroxychloroquine (HCQ) as a preventive against COVID-19 to even those healthcare workers who are not working in COVID-19 hospitals. On the same day, medical journal The Lancet published an analysis of data from nearly 15,000 patients and concluded that there is no evidence of HCQ benefiting COVID-19 patients. Rather, the drug could harm them, the analysis said.

A higher percentage of patients with COVID-19 who used HCQ had died compared to those who had not received chloroquine, HCQ or their combinations with antibiotics (known as macrolides), the study found. Further, patients who were given the drug had an increased risk of “de-novo ventricular arrhythmia”--that is, an abnormally high heart rate--compared to those who had not.

The World Health Organization (WHO) has cautioned against the use of HCQ in two press conferences in the last week. “At this stage hydroxychloroquine nor chloroquine have been as yet found to be effective in the treatment of COVID-19 or in the prophylaxis against coming down with the disease. In fact...warnings have been issued by many authorities regarding the potential side effects of the drug,” said Michael Ryan, a WHO official, on May 20, 2020. “Reserve it for randomised trials where it is approved for emergency use in clinical settings, under close clinical supervision because of its potential side-effects,” said Ryan on May 22, 2020.

India’s guidelines, which are not in line with the WHO's, came just as Harsh Vardhan, India’s health minister, took over as chair of the WHO executive board on May 22, 2020.

But taking HCQ “should not instil a sense of false security”, cautions the advisory. 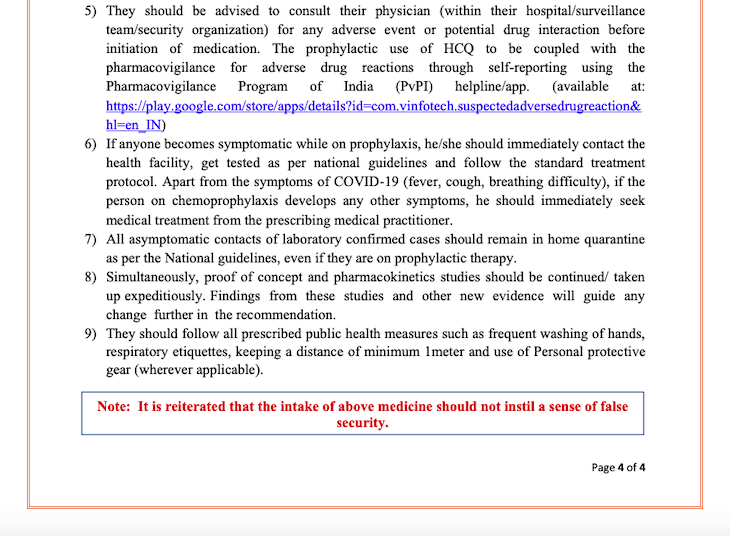 A screenshot of the May 22, 2020 advisory by the Indian Council of Medical Research. The ICMR recommended health workers use HCQ as a preventive but also cautioned against a “sense of false security” and recommended they continue to take other precautions.

Even when the earlier recommendation was published, experts had cautioned against the use of HCQ as a preventive measure for COVID-19, as IndiaSpend had reported on March 29, 2020. Experts had said that efforts should instead be made to ensure that healthcare workers have access to protective gear, which is known to prevent contact with SARS-CoV-2, the virus that causes COVID-19.

“Yes the evidence in favour of HCQ as a prevention, may not yet be 100% clinching. But we had to do something to boost the morale of the health workers,” a member of the government’s task force on COVID-19 had told IndiaSpend in March 2020.

Scant evidence on safety or efficacy of HCQ for COVID-19

India’s latest advisory which expands the use of HCQ says “emerging evidence on its safety and efficacy” has been reviewed by a national task force constituted by the ICMR. The advisory said they looked into the use of HCQ as a prophylaxis of SARS-CoV-2 infection for populations at a high risk of contracting COVID-19.

A group of experts--a joint monitoring group headed by the director general of health services--also reviewed the information around HCQ and is aiding the government in formulating its policy, the advisory said. This group has representatives from All India Institute of Medical Sciences (AIIMS), the ICMR, the National Centre for Disease Control and the WHO.

The advisory does not provide a list of citations for what “emerging evidence” has been reviewed. The advisory mentions a few studies undertaken by the Indian government but these have not been made public yet.

One of the studies is by India’s National Institute of Virology (NIV). They did a laboratory study on the effect of HCQ on the viral RNA copy of SARs-CoV-2 and found lower infectivity, the ICMR advisory said.

Another study assessed reports of adverse effects from 1,323 healthcare workers who were given HCQ prophylaxis and said that most of them had only “mild adverse effects”.

The advisory says that a study was also carried out in three central government hospitals in New Delhi and showed that healthcare workers involved in COVID-19 care who were on HCQ prophylaxis “were less likely to develop SARS-CoV-2 infection, compared to those who were not on it”, the advisory said.

Another study by the government of 334 healthcare workers at AIIMS, showed that those on HCQ prophylaxis (248 people out of 334) had a “lower incidence of SARS-CoV-2 infection than those not taking it”.

No further details have been provided on any of these studies and none of them have been published in peer-reviewed journals so far.

(Bhuyan is a special correspondent at IndiaSpend.)