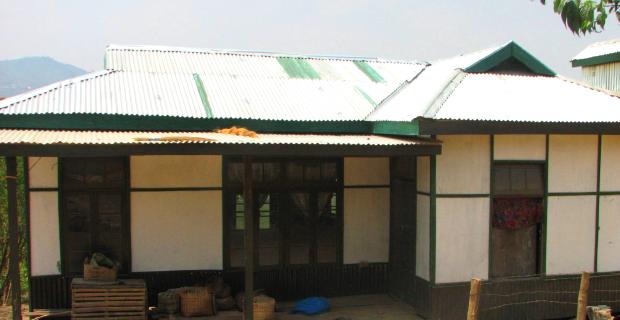 * About 30 million houses have been built with a total spending of around Rs 94,087 crore

Housing for India’s poor, especially in rural areas, is a major worry for all, including policy makers.

The Government’s own estimates put the country’s rural housing shortage at 40 million till the end of the 12th Five-Year Plan (2012-2017).

And it hopes to fix this by spending some Rs 150,000 crore over the 12th Plan by assisting 30 million rural households and subsidising another 10 million. The objective is noble but seems ambitious - the Government took 25 years to build 30 million houses (since the scheme began in 1986), and is now wanting to build as many in 5 years.

A Planning Commission report on 12th Plan says that one major reason for continued shelterlessness in rural India is shortage of financial resources. "According to the NSSO, about 66% financing of new construction in rural areas in 2010–11 was done by rural families with their own resources, about 27% had some amount financed from non-institutional agencies such as moneylenders, family and friends while only 9% of new construction was financed by institutional channels such as Government schemes, banks and so on...”

The key Government programme for home-building in rural areas is Indira Awaas Yojana (IAY). Starting off from 1986, about 30 million houses have been built under IAY with a total spending of around Rs 94,087 crore (up to December 2012). The Ministry of Rural Development, which is implementing the programme, had allocated Rs 11,075 crore for rural housing in 2012-13. Out of this, Rs 10, 513.20 crore had been allocated under IAY for the construction of 3 million houses. 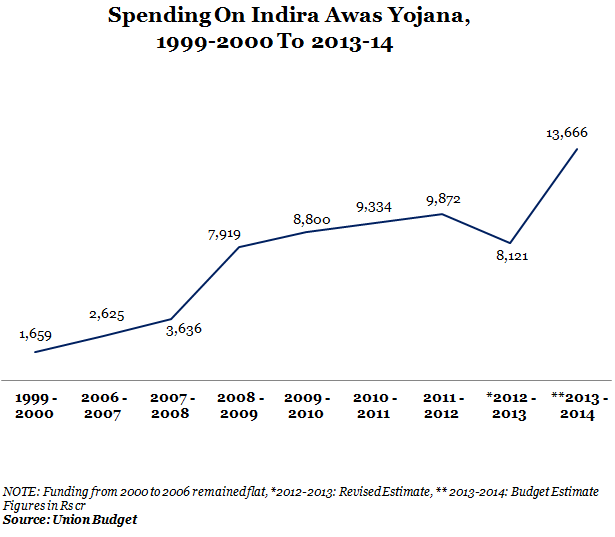 Here’s a look at the five states with the highest allocations for IAY. 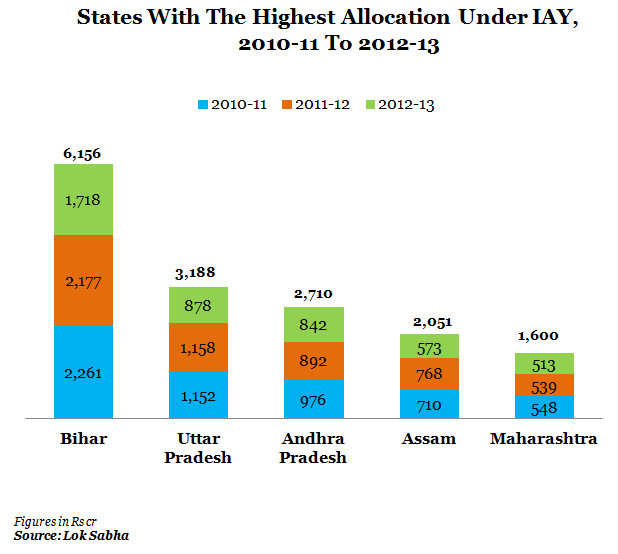 Around 50% of the total allocation is shared among Bihar, Uttar Pradesh, Andhra Pradesh and Maharashtra with Bihar accounting for 43% in the year 2012-13. Interestingly, Bihar, Assam and Maharashtra are some of the worst-performing states when it comes to number of houses completed under IAY.

Let us now take a look at the physical performance of the Top 5 and Bottom 5 states based on the completion rates from 2008 to 2013. 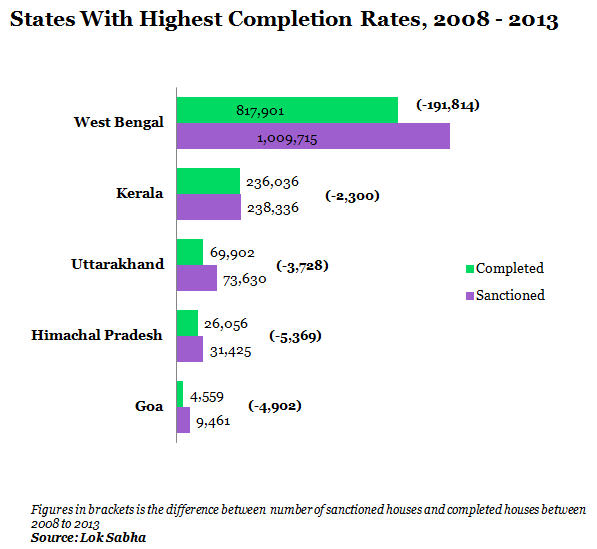 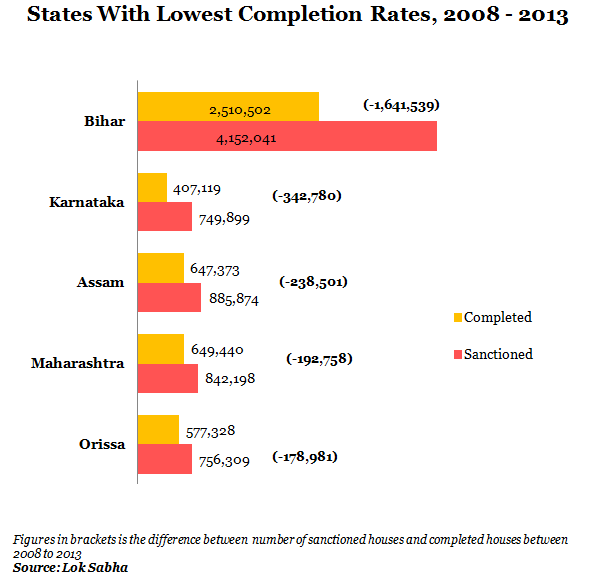 While Kerala, Uttarakhand and Goa have the best completion rates in the country, Bihar has a big shortfall of over 1.6 million houses. Karnataka (342,780), Assam (238,500), Maharashtra and Orissa also were slow in executing projects.

Houses For SCs/STs/OBCs: Are They Being Built?

As per IAY guidelines, at least 60% of the funds available are to be utilised for construction of houses for SC/ST BPL families. Allotment of the dwelling unit is usually done in the name of the female member of the beneficiary household.

According to the poverty estimates of 2009-10, in the rural areas, Scheduled Tribes suffer the highest level of poverty at 47.4% followed by Scheduled Castes with 42.3%, and Other Backward Castes (OBC) with 31.9% as against 33.8% for all classes.

Let us now look at IAY allocations for SCs/STs/OBCs: 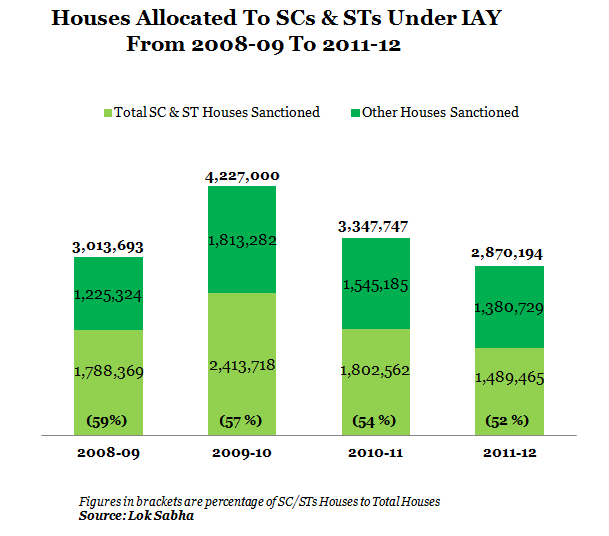 Like all other Central Government programmes, IAY, too, faces implementation challenges. One major problem facing the scheme is that when the State Governments receives the money, it goes to the District Rural Development Agency (DRDA), which is then expected to distribute the funds among the districts (or the gram sabhas) on the basis of proposals received by the gram sabhas.

However, many gram sabhas do not send proposals in time due to which money, which has been sanctioned to construct houses, is generally lying unutilised with DRDA. For example: in the case of Gujarat (also among the low performing states), only 10 out of the total 26 districts had submitted proposals and funds were released to only 5 districts in 2012-13.

An audit report by the Government auditor Comptroller & Auditor General (CAG) said that in some cases, houses were incomplete for want of the second installment while in some cases houses that had been constructed as an extension of existing houses were used as garages and for other purposes.

Other issues hampering the scheme include proposals not being submitted to the respective agencies, non-compliance of conditions imposed while releasing the second installment, non-settlement of accounts and misuse of funds.