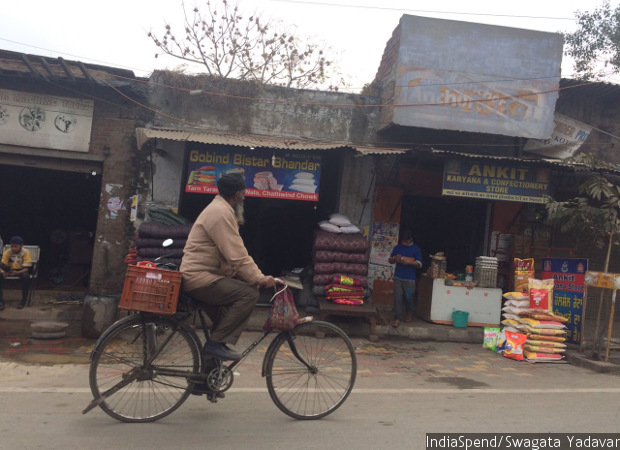 A cyclist rides past grocery stores in Tarn Taran, near Amritsar, Punjab. The growth of the poll-bound state's industries, services and overall economy lags the national average, and the unemployment rate among its youth exceeds the Indian average.

The growth of its industries, services and overall economy is 5.9%, which lags the national average of 7.6%, the unemployment rate among its youth is 16.6% while the Indian average is 10.2%, and while literacy is rising, the education system is faltering with the dropout rate increasing from 1.3% in 2014-15 to 3.1% in 2015-16 for the primary level.

It is against this economic backdrop that 19.74 million (roughly equal to the population of Romania) voters in India’s 11th-richest state, Punjab, will vote on February 4, 2017, to choose a new government in a state where the Shiromani Akali Dal-Bharatiya Janata Party alliance has held sway for a decade, riding on populist policies that appear to have cut money for education and public investment without adequately addressing farm distress.

The per capita income for Punjab will likely increase 5% to Rs 101,498 in 2015-16, according to advance estimates, but this rise does not reflect a host of economic problems.

Although Punjab is likely to have recorded a higher agricultural growth rate in 2015-16 than the national agricultural growth rate for the first time since 2010, average farm sizes are falling--from 3.9 hectares to 3.7 hectares over five years from 2005-06 to 2010-11, according to 2010-11 Agricultural Census data, the latest available--farm growth has slowed, and many youth are no longer interested in farming, as this 2016 study in the Asia Pacific Journal of Research observed.

Lack of research and development and the inability to exploit irrigation facilities and boost yields are issues that lead to agriculture to grow slower than it could, according to the Economic Survey 2015-16 of Punjab. Water is an emerging issue: Of 142 groundwater blocks in Punjab, 110 are over-exploited, IndiaSpend reported in March 2016.

The declining agricultural growth has had a severe impact on the 6.3 million people of the working population that are engaged in agriculture, according to the 2011 Census.

This has led to increasing farmer suicides. Punjab reported India’s third-highest number of farmer suicides at 449 in 2015, according to a written reply given by the Lok Sabha in 2016.

Services and industry should, normally, absorb those who move out of agriculture, and while that is happening in Punjab, it doesn’t appear to be happening at the required rate.

Services growing, but not enough jobs--or jobs that youth want

The services sector is growing, but it does not appear to be enough to provide enough jobs--or jobs that the state’s educated youth, particularly in rural areas, want or are prepared for.

Over seven million workers in the state are engaged in the services sector, according to the Census 2011 data.

“Due to lack of technical skills, the rural youth face hardships to compete with the urban ones… To fulfill their aspirations they choose the way to settle abroad which is major trend among Punjabi rural youth,” said the Asia Pacific Journal of Research study quoted earlier.

Punjab’s economy is expected to have grown 5.9% for the year 2015-16, according to the Economic Survey of Punjab, 2015-16, compared to India’s growth rate of 7.6%, apparently inadequate to generate enough jobs. The estimated growth rates for the secondary (industrial and allied activities) and tertiary (services) sectors are likely to be lower than the national average for the year 2015-16.

Increasing subsidies--and hence a shortage of money for government investment--have been cited as a key reason for Punjab’s declining growth rate, according to this 2012 commentary by the CATO Institute, an American think tank based in Washington DC.

Populist policies, such as free electricity to farmers and cash handouts to lower-caste married women, could also be responsible for slowdowns, the Wall Street Journal reported in May 2011.

Inflated land prices due to restrictive laws, neglect of higher education due to emphasis on agriculture, investment rates below the national average since the 1990s and corruption are other reasons for slow industrial growth in Punjab, according to this 2012 paper by the CATO Institute.

Punjab’s industrial sector also suffered due to tax breaks given by New Delhi to establish factories in the hilly states of Uttarakhand and Himachal Pradesh, leading to a flight of industrial capital, the paper said.

Even if this capital stayed in Punjab, it does not appear that the state’s education system can supply the human resources it needs.

The neglect of primary education, and Punjab’s drop-out problem

Punjab’s education data hide more than they reveal: Literacy and the general education budget rose, but spending on primary education and incentives to retain students in school were cut, leading to the primary school dropout rate doubling in one year.

But the average annual dropout rate at the primary level increased, from 1.3% in 2014-15 to 3.1% in 2015-16, according to District Information for System Education data, explaining why the rising literacy rate may not be enough to prepare young Punjabis for industrial and service-sector jobs.

The funding cut to incentives could be a reason why students drop out: Over 50,000 students in 32 government-aided schools were not being served mid-day meals, NDTV reported in September 2016. Funding for the mid-day meal programme, often cited as an incentive to keep students in schools, was cut from Rs 277 crore in 2015-16 to Rs 250 crore in 2016-17.

Lack of classrooms, over-congestion of present ones and unavailability of basic electricity or drinking water are some reasons as to why students dropped out or cut classes, the Indian Express reported in May 2016.

The government is trying to address the dropout issue by introducing “smart classrooms”-- classrooms that foster teaching through computers, assistive listening devices and audio-visual devices with specialised software that will enable the children to study in an internet-free environment--Hindustan Times reported in December 2016. The aim of these classrooms is to encourage children who love to watch television to enrol in schools and learn from a similar medium.

Punjab’s education crisis appears to partly manifest itself in rural unemployment. There may not be as many jobs as young Punjabis need, but many youth, as we said, may not be adequately trained for the available jobs.

Punjab has India’s eighth-highest rural youth unemployment rate, which is higher than the national average for both rural and urban areas. The youth employment rate refers to the proportion of youth (ages 18-29) labour force that is unemployed.

Increasing mechanisation of agriculture and the lack of required skills to work in information technology firms have left Punjab’s rural educated youth in a limbo, according to this 2014 paper by the Economic and Political Weekly.

The state’s failure to provide employment opportunities and its focus on agriculture has also contributed to the growing unemployment situation, Mint reported in June 2016.