New Delhi: Thousands of Rohingya refugees in the National Capital Region of Delhi are at high risk for contracting COVID-19, as they live in cramped habitations and have limited access to public healthcare, activists say.

Three weeks after the Centre announced a country-wide lockdown and over 14,000 people have tested positive for the deadly COVID-19, the Ministry of Home Affairs has reportedly directed all states and union territories to screen Rohingya refugees as some may have attended last month’s Tablighi Jamaat congregation in Delhi’s Nizamuddin, which later emerged as a hotspot.

Rohingya Human Rights Initiative (R4R), an NGO working for Rohingya welfare across India, says the situation in camps across Delhi-NCR is precarious. “There have been no reported cases yet, but we have seen some showing symptoms like fever and cough in the Kalindi Kunj and Madanpur Khadar camps. For the Rohingya, social distancing and quarantine is a privilege that they can’t afford,” R4R said.

“Think of Dharavi, in Mumbai. That is how cramped these camps are. Two rooms are a luxury and it would be impossible to self-quarantine someone without infecting their whole family,” said Arshad Nihal of the Ubais Sainulabdeen Peace Foundation, an NGO working with the community. Living conditions in Dharavi’s slum cluster have, in fact, generated a COVID-19 hotspot, with 100 cases and 10 deaths as of April 17, 2020.

Other Rohingya refugee camps such as the ones in Faridabad and Haryana’s Nuh district are no different. The home ministry has reportedly said Tablighi Jamaat members had attended “ijtema” (congregation) at Nuh, adding to the fear that the pandemic may spread in these camps too. 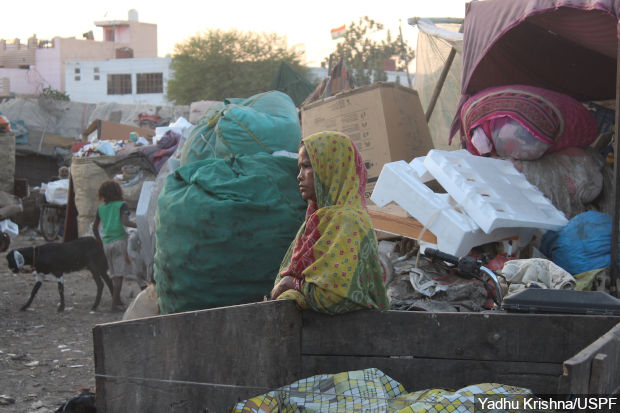 A Rohingya refugee at a garbage dump in Delhi-NCR, November 2019

However, Rohingya refugees associated with the Tablighi event in Delhi, Haryana and Jammu were already screened in the third week of March 2020 and have completed quarantine, according to community members in Delhi. “We know of 12 people altogether, who were screened and quarantined in March due to the Jamaat case,” said Sabber Kway Min, founder, R4R.

Rohingya refugees who had travelled back home to Jammu after the Tablighi event have also been screened already, said Abdul Rohim, a Jammu-based liaison for R4R, who also works with Save The Children, a UNHCR implementing partner. “Those who were quarantined here in Jammu have not shown any signs of the disease. So far, we have not seen any signs among other community members in Jammu, either.”

Although the government screening is a welcome move, the refugees fear targeting or a communalisation of the issue. “I am afraid that if any refugee gets the disease, they will say that the Rohingya brought the virus,” said Sabber. The Rohingya, not formally recognised by the Indian government as refugees, have also had members of their community deported to Myanmar, where they are not recognised as citizens and suffer persecution.

Due to their stateless condition, Rohingya refugees struggle to access basic healthcare even under normal circumstances. In Nuh, camp residents said pregnant women received little prenatal care and 17% of deliveries in 2016 took place in the camp itself.

The narrative was similar in camps located in Faridabad (Budena Gaon and Mirzapur) where refugees referred to Safdarjung Hospital by the local Badshah Khan Hospital have no passage due to the lockdown. Here, too, all deliveries take place in the camp.

In Kalindi Kunj, the United Nations High Commissioner for Refugees (UNHCR) conducts occasional medical camps and assists financially with any consultations at Safdarjung Hospital, which are reimbursed, residents told IndiaSpend. However, a prohibitively long waiting period often forces them to avail of expensive private doctors’ consultations. Residents also depend on medical supplies often given by the Jamia Hamdard and Alshifa hospitals in the vicinity.

Access to healthcare is similarly strained in Nuh--residents here go to a local school for check-ups, illnesses and vaccinations, though they were unable to confirm whether the facility was a dispensary, anganwadi or primary health centre. The last reported medical camp was held here in 2016. Refugees living in this camp also complained that ambulances never responded to their calls. The two hospitals they visited for emergencies--Nallhar and Nuh Medical College--often referred them to Safdarjung Hospital in Delhi, which is over 70 km away.

Due to the current lockdown, that is not accessible.

The health hazard faced by Rohingyas living in camps across Delhi-NCR is exacerbated by the profession these refugees engage in. Some living in the Kalindi Kunj camp are involved in sorting potentially hazardous biomedical waste, heightening the infection risk for an already vulnerable community. Similar worries were expressed by the Ubais Sainulabdeen Peace Foundation (USPF), which supports Rohingya communities in Faridabad.

“The community is quarantined inside various camps across Delhi-NCR at present, which keeps them safe but efforts are on to help them,” said Nihal of USPF. “Transporting essentials to them during lockdown is our main challenge. We are also worried about their exposure to any surgical and bio-waste they sort. Faridabad’s relative isolation is an advantage but Rohingyas who live in non-camp areas are more vulnerable.”

“We are 70 families living in Khajori Khas, in rented accomodation. We have rations for now, but no income, how will we pay rent? Already some families are being harassed for rent,” said Shafi Mohhamed*, a Rohingya resident of Khajori Khas.

With fear of COVID-19 raging among refugees, community members and NGOs are attempting to find new ways of conveying the seriousness of the threat to camp residents.

“We had created some warning videos in their mother tongue (Rohingya) which we are circulating among the camp residents. We are also distributing essentials,” said Nihal of USPF. Additionally, R4R has been distributing food, masks, sanitisers and soap in Faridabad, Kalindi Kunj, Shaheen Bagh, and Khajori Khas in a limited capacity. “We have sent food supplies but we need more financial support to distribute medical supplies,” said Sabber.

The UNHCR in India and its implementing partners (Bosco Organisation for Social Concern and Cooperation, Development and Justice Initiative, Save the Children and others) have been disseminating credible information from the World Health Organization and the Government of India in eight different languages. The UNHCR has also instituted a toll-free number for the refugees to reach out, its Delhi office told IndiaSpend by email on March 27, 2020. As of April 2020, they are also distributing food rations, soap and sanitiser in the camps.

This dependence on outside organisations, especially NGOs, which is guaranteed under normal circumstances, has become tenuous during the prolonged lockdown. As the Delhi government has sealed ‘hotspots’ around Delhi-NCR, movement has been further restricted and the already strained access to healthcare and NGOs could be cut off. IndiaSpend confirmed that R4R has managed to access a movement pass, but much of their distribution and awareness-related work has been affected by the lockdown.

There has been little indication from the Centre or state governments whether the Rohingya community and its settlements are being factored into the larger COVID-19 response. The latest directive to screen the Rohingya raised concerns surrounding potential Rohingya participation at Tablighi Jamaat events across India, not the poor hygiene conditions in packed camps.

There have been reports of camp residents in Madanpur Khadar suffering from COVID-19-like symptoms. The UNHCR’s awareness and preparation efforts could prove ineffective given the Rohingyas’ limited access to healthcare and the closure of outpatient departments in major government hospitals in Delhi. Conversations with NGOs indicate that no cases have been formally detected in the Rohingya camps as of yet.

Since the announcement of a total lockdown across India on March 24, 2020, and its subsequent extension to May 3, 2020, various state governments have announced initiatives to help the poor and the vulnerable. The Delhi government has announced free meals for those lodged in shelters and government schools, and also announced measures to take care of internal migrants in the capital.

However, these initiatives have not benefited the Rohingya refugee communities, Sabber of R4R said. Except for the latest directive, there have been no specific policy announcements about measures for the 18,914-strong community from Myanmar in India. The country is also home to 209,234 people categorised as “population of concern”--refugees and asylum seekers--by the UNHCR.

(Mitra is a researcher with Mumbai-based migration research organisation, India Migration Now. Srinivasan is a migration policy analyst, a former researcher at IMN).

Rohini Mitra is a researcher at Mumbai-based migration data, research, and policy organisation, India Migration Now. IMN is a venture of the South East Migration Foundation. Follow their work: Twitter/@nowmigration and Instagram/@indiamigrationnow