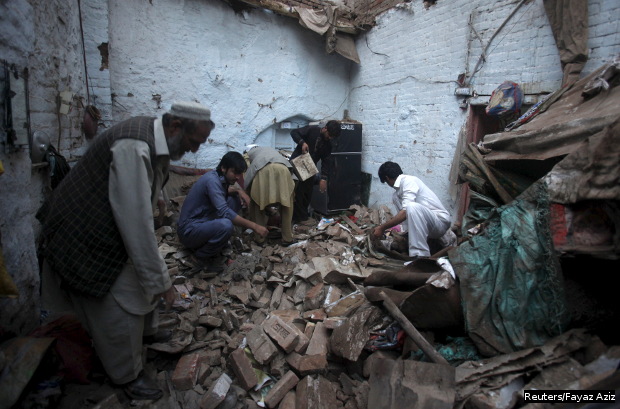 People searching for their belongings at their home in Peshawar, Pakistan, damaged by Monday's earthquake.

As geological data and details emerge of the earthquake that struck the Hindu-Kush mountain range straddling Pakistan and Afghanistan and was felt across north India on October 26, the good news is that the 7.5-magnitude tremblor was too deep to be catastrophic.

The bad news is that it was unrelated to the much shallower, far more devastating Gorkha earthquake of April 25 and it did not relieve any of the tectonic pressures that have built up over more than 500 years along a 400-km section of a fracture called the Main Himalayan Thrust, situated on the geological confluence of India and Asia.

In other words, a big earthquake is still expected, although no one can predict when, as IndiaSpend previously reported.

As per reports here and here, more than 260 people were killed in the October 26 quake, and the death toll is likely to rise.

The quake occurred at “approximately 210 km below the Hindu Kush Range in northeastern Afghanistan”, according to a preliminary analysis from the US Geological Survey (USGS). The 7.9 magnitude Gorkha earthquake that devastated Nepal took place about 15 km under the surface. Shallower tremblors typically cause the earth's surface to shake more and cause more damage in a concentrated area.

“This was a large, deep earthquake... under the Hindu Kush," said Roland Burgmann, professor of earth and planetary science at the University of California at Berkeley. "The depth explains the wide area of damage.” 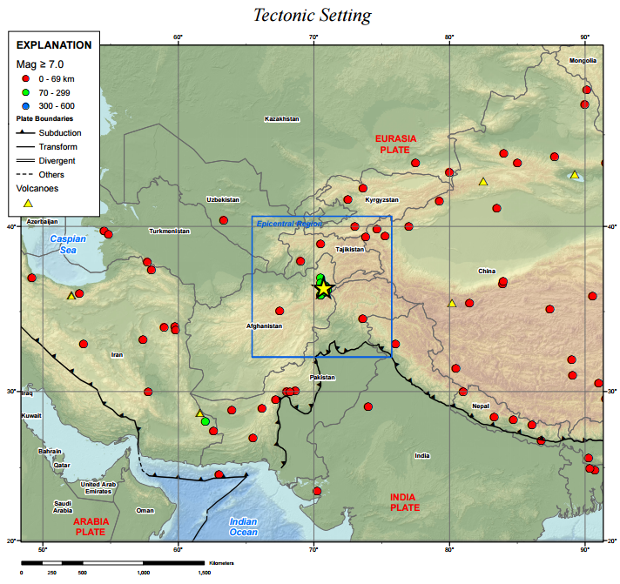 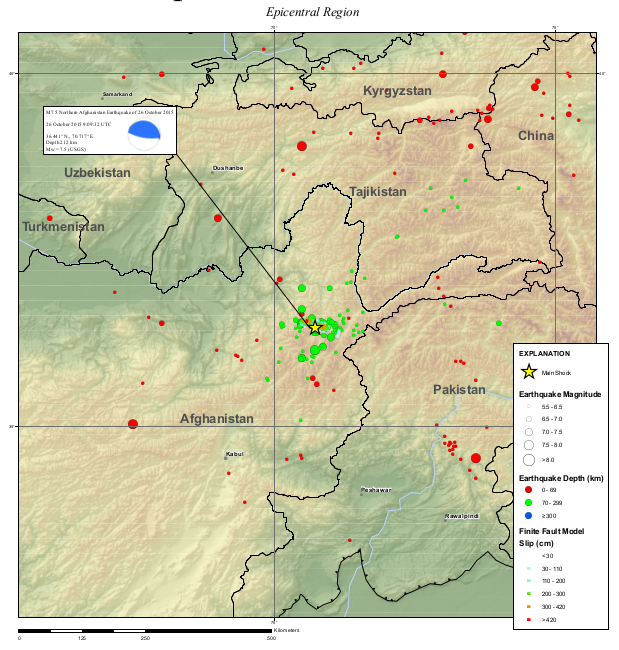 The Hindu-Kush earthquake indicates a clear pattern of quakes shaking up the region. “Seven other M (magnitude) 7 or greater earthquakes have occurred within 250 km of this event over the preceding century, the most recent being a M 7.4 earthquake in March 2002, just 20 km to the west of the October 26, 2015 event, and with a similar depth and thrust fault orientation," said the USGS analysis. "The 2002 event caused over 150 fatalities, and the damage or destruction of over 400 houses in relation to an associated landslide.” 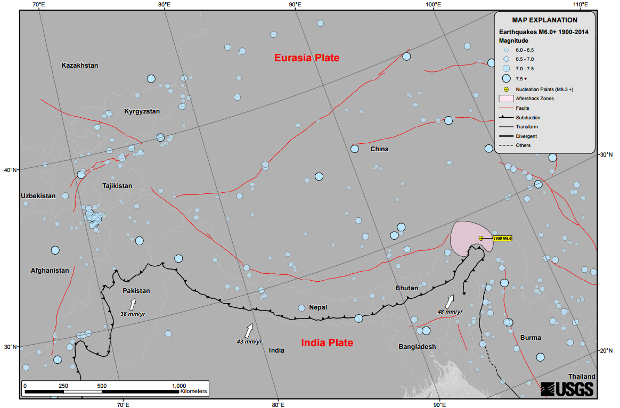 What was important about the Hindu-Kush earthquake

The most important thing about this earthquake is the depth at which it occurred. “Compared to the Gorkha earthquake at 15 km deep, this was deep,” Stanford University geophysicist Simon Klemperer told IndiaSpend.

He explained that shaking drops with depth, which was good news. “So the ground shaking (would) be about 100 times less than for (the) Gorkha (quake), which was of similar size,” said Klemperer.

The second important thing about the Hindu-Kush quake was that was unconnected with earthquakes along the Himalayas, experts said.

As IndiaSpend reported earlier, to the west of Gorkha in Nepal, the 400-km-long Main Himalayan Thrust has not witnessed a big earthquake since 1505.

This is where the faultline, the meeting point of the Indian plate—a raft of the earth's crust that carries the subcontinent as it slams into the Eurasian plate carrying Asia—is locked from the Himalayas to a depth of up to 120 km. The fault could break in a single earthquake of or larger than magnitude 8.5, slipping as much as 10 metres, experts said. India's high-risk zones are here and here.

A tale of different tectonic domains

As with the Himalayas, the Hindu-Kush-Pamir mountain zone is also seismically active because it forms another part of the Indian plate grinding against the Eurasian plate.

From the tectonic point of view, however, “the earthquakes are occurring in different tectonic domains”, Vineet Gahalaut, Director, National Centre for Seismology, New Delhi, told IndiaSpend.

Along the 2,500-km-long Himalayan arc that extends from Kashmir to Arunachal Pradesh, the Indian plate dives under the Eurasian plate at a "gentle angle" of 10 degrees, and there is a huge landmass, the Tibetan Plateau, in between the two plates, Gahalaut explained.

In the Hindukush-Pamir region, the Eurasian plate is grinding in from the north, and the Indian plate is inching up from the south, and the width of the Tibetan plateau is almost nil there. So, two plates are subducting—meaning, one diving below the other into the mantle, the layer below the crust—under the plateau at a very steep angle.

Klemperer said there are deep earthquakes here because the continental crust is thrust deep into the mantle.

In the Himalayas, however, they occur at shallow depths--around 25 to 30 km--causing more deaths and extensive damage. In the Hindukush-Pamir region, they occur at more than 200 km below the surface. 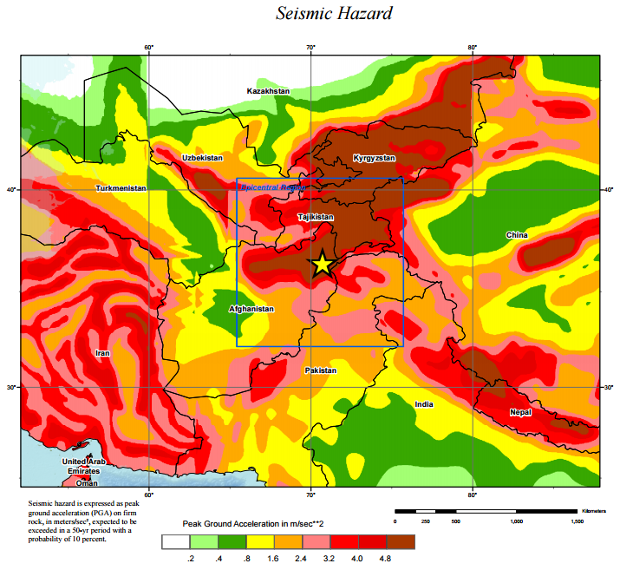 Every expert we spoke to said that without good building codes and construction, enforced by the government and followed by people, more death and damage on an extensive scale is inevitable.

Earthquakes of this magnitude occur in Japan and the US as well. They don’t kill as many people.