The rape of the 51 year old Danish tourist in New Delhi brings serious concerns about the safety of women in India. While the police have managed to arrest two homeless men as suspects of the gang-rape, the series of such events only highlights the lapse on part of the police to provide safety to women.

In fact the number of rape cases in India have increased from 16,373 cases in 2002 to 24,923 cases at the end of 2012, a jump of 52%. In fact, in most of the cases, the offenders are know to the victims. IndiaSpend had reported earlier that of the total cases, 35% were neighbours and six percent were relatives. Alarmingly, 393 cases involved parents or close family members, up from 267 cases in 2011, which in percentage terms is up 47% in one year.

Among states, Madhya Pradesh had the largest number of cases where the offenders were known to the victims with 3,425 cases. 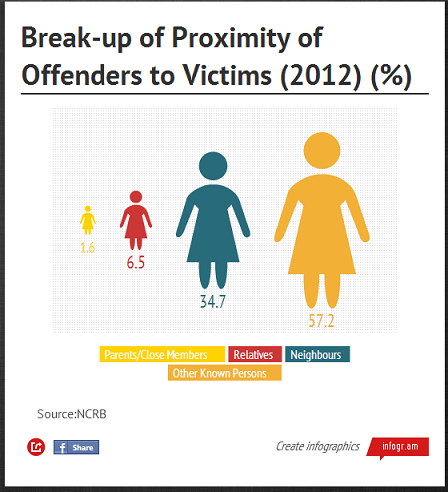