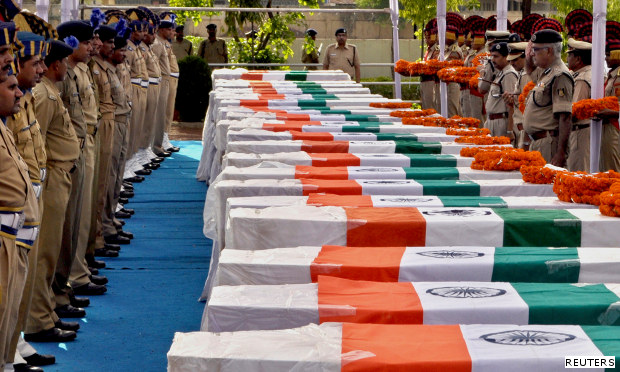 With 71 security personnel killed in Maoist-related violence in 2017, it is already the deadliest year in the past seven years for security forces, according to an IndiaSpend analysis of data from South Asian Terrorism Portal (SATP).

On April 24, 2017, 25 Central Reserve Paramilitary Force (CRPF) jawans were killed in an ambush by Maoists in Chhattisgarh’s Sukma district. The encounter with 74 battalion of CRPF occurred at Kala Pathar near Chintagufa in Sukma, the worst Maoist violence-affected district in south Bastar area of the state.

Source: South Asia Terrorism Portal*The SATP portal has updated data only till April 16, 2017. We have added deaths of jawans on April 24, 2017, as well in our analysis.

We are proud of the valour of our @crpfindia personnel. The sacrifice of the martyrs will not go in vain. Condolences to their families.

Extremely pained to know about the killing of CRPF personnel in Sukma. My tributes to the martyrs and condolences to their families. 1/2

Maoist outfits cause the most terror deaths in India, IndiaSpend reported on November 19, 2015.

Maoists are left-wing communist radicals attempting to overthrow India’s government through force. The regions most affected by Maoist violence lie in a wide swath of mineral-rich, forested tribal lands, from Maharashtra to West Bengal. Tribals account for a third of the 21 million people displaced by development projects, as IndiaSpend reported on June 17, 2014, fuelling a resentment that the Naxals exploit.

More security forces have died in Bharatiya Janata Party-ruled Chhattisgarh (235) than in any other state between 2011 and 2015, IndiaSpend reported on April 14, 2015.

Source: South Asia Terrorism Portal*The SATP portal has updated data only till April 16, 2017. We have added deaths of jawans on April 24, 2017, as well in our analysis.

1. The story and the headline have been updated to clarify that the figures from the South Asia Terrorism Portal refer to casualties of security personnel, and not just CRPF personnel.

2. An earlier version of the story said there were 26 casualties of CRPF personnel on April 24, 2017, based on early reports. We have now corrected this figure to 25.